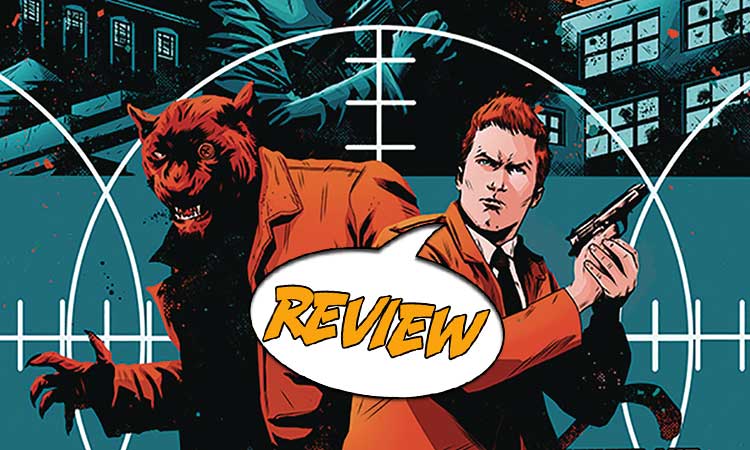 Despite being on leave per Internal Affairs, Detective Locke becomes involved in the murder case of multiple public servants. On top of that, his best friend, the anthropomorphic panther known as Spencer, is becoming more aggressive. Guess having a button for an eye will do that to a guy. I checked out an advance copy of the ground-breaking Spencer and Locke series with SPENCER & LOCKE 2 #1, out from Action Lab – Danger Zone April 24th! Previously in SPENCER & LOCKE: Detective Locke had been investigating the death of his high school love, Sophie Jenkins when events lead him to confront his violent childhood of abuse. Calling on his imaginary friend, a panther named Spencer, he proceeded to face his past, battle his gangster father and discover he was a father to a young girl named Hero. Now, on leave after the bloody events of the last series, he is trying to prove himself innocent of wrongdoing and gain custody of his daughter. Unfortunately, events are working against him, as a new string of deaths seems to lead to a new killer in town, a killer that may be crazier than the man who is trying to catch him.

WHEN YOU HAVE VERMIN, YOU CALL AN EXTERMINATOR

Rorschach is more than a masked vigilante; it is also a series of test that help to analyze the subjects’ personality, emotional level, and functionality. For Detective Locke, taking the Rorschach test is part of the process he has to go through to get his daughter back. Home, family, nothing, these are all answers to the questions of “What you see?” which is proposed by his therapist. They are all lies. Violence and death are what he sees, but he also wants to see his daughter again. Later, standing on besides his best friend, the seven-foot-tall talking panther he calls Spencer, the big cat decides to tell him what the problem is. He is a hunter, like Spencer. He goes and finds the vermin and gets rid of them. Spencer urges Locke to get back out on the streets, to get the vermin. Locke refuses. He has to stay out of the spotlight, chief’s orders. The future of his life with his daughter depends on it. From inside, Melinda Mercury, his reporter girlfriend comes out to see who he is talking to. She finds only Locke holding his childhood stuffed animal, Spencer. Meanwhile, across town, the hitman known as Roach Riley has found his next target.

Can Locke deal with trying to get his daughter back, clearing his name and regaining his pace in the police department, all the while juggling a relationship and hunting down a killer who may be even crazier than he is? Guess you will have to wait until April to find out.

THAT FEELING OF EXISTENTIAL DREAD…

I completely missed out on the first Spencer & Locke series from Action Lab, and I now regret that. The series has been described as a parody of Calvin and Hobbes by way of Frank Miller’s Sin City. I can see it, and it is beautiful. There are sequences, cartoon homages, scattered throughout the book that pay tribute to the deep innocence of Calvin and Hobbes. Here, in this context, knowing who these characters turn into, makes the little Spencer and Locke panels heartbreakingly tragic. The villainous Roach Riley is a bizarre hybridization of Beetle Bailey and the most heartless philosophy-spouting assassin. Some sequences scream, Frank Miller’s Sin City and you suddenly a Pattersonesque panel in the middle of the carnage and it just fits. It’s a little scary.

Creator David Pepose does some real magic here. You know that Spencer is just in Locke’s head and he is some aspect of Locke’s own damaged psyche, but he is fleshed out so well that you forget. This is no mind puppet whispering deep metal revelations into a twisted man’s ear. Spencer acts like Locke’s partner because he is his partner. As I read the issue I found myself wishing Spencer was more than a piece of Locke’s mind and that everyone else was crazy for not being able to see him. It is a difficult trick to pull, but Pepose does it well.

Artist Jorge Santiago, Jr. has talent. Throughout the book, he switches styles from Mort Walker to Frank Miller to Bill Patterson to his own style. I think I even occasionally spot a little Joe Quesada inspiration in the mix. His own style, with its hints of Manga influence, works great, but his ability to work out so many others, and to get the panel layouts needed to emulate those styles correct as well, is a treat to see. His colorist, Jasen Smith (Karma Police, Return of the Super Pimps) is a big part of this as well. He brings the solidity to the illustrations and makes what could be difficult transitions for the eye seamless.

This book is not out for a few months, but I hope that my thoughts on it make you check it out if you don’t already have it on your pull list. While you’re at it, take time to delve into the roots of this book, its pretty amazing stuff. This is psychological crime noir at its best. The mash-up you never realized you needed until now.

SPENCER & LOCKE 2 #1 is the psychological, homage filled, crime noir book you never knew you needed until now. Get it on your pull list.

83%
83%
Surprisingly Violent, But So Satisfying

This book is not out for a few months, but I hope that my thoughts on it make you check it out if you don’t already have it on your pull list. While you’re at it, take time to delve into the roots of this book, its pretty amazing stuff. This is psychological crime noir at its best. The mash-up you never realized you needed until now.
SPENCER & LOCKE 2 #1 is the psychological, homage filled, crime noir book you never knew you needed until now. Get it on your pull list.