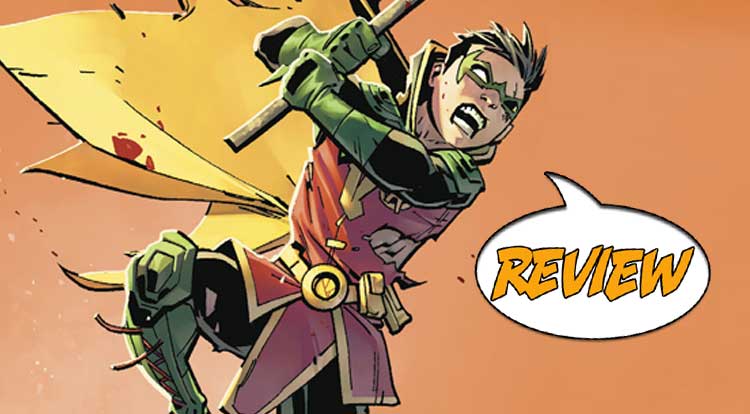 Robin Vs. Robin, and to the victor the yellow cape!  Your Major Spoilers review of Teen Titans Annual #1 awaits! Previously in Teen Titans:  Betrayed by the Red Hood, Damian hunts down Jason Todd and vows vengeance- or death!  Meanwhile, Djinn and the rest of the Titans battle one of the Other’s closest allies, Joy Stick!  But when Control Freak learns all of Djinn’s most dangerous secrets, Djinn will do anything to keep the Teen Titans from finding out the truth!

We open in a bar in Texas, where Jason Todd is drowning his sorrows in a bottle of something-or-other, only to be interrupted by Damian Wayne.  After being ambushed by The Other a couple of issues ago, Damian has come to believe that Jason/Red Hood turned on his team and led to the death of the assassin Lady Vic.  Jason tries to use logic against his “little brother”, but finds Damian unwilling to listen, leading to a senseless fight between Bat-wards.  Their battle is a one-sided affair, until Damian chides Jason about the Joker killing him, leading Jason to put the smack down on Robin and remind him which Robin was the dark and brooding one first.  He also promises that, should Damian seek him out again, he will kill him and the Teen Titans.  In the second feature, we learn a little bit more about Djinn, as the rest of the Teen Titans battle Joystick in a mall, leading to a lot of blood and bruises and the revelation that Djinn is hiding something really terrible behind her genki girl facade.  Oh, and once the villain is captured, she tortures and threatens to kill him, while Crush destroys Robin’s cycle in a fit of what seems to be jealous rage.

A WORLD WHERE JASON TODD IS THE VOICE OF REASON?

I gotta tell you, I really disliked both of the stories in this issue.  The Jason/Damian standoff is essentially two buttheads refusing to listen to one another for twenty pages, instead leaning on the pathos of being Batman’s second and having been dead while they shout tough-guy dialogue at each other.  (Worse still, both of them come off looking like poseurs.  And the decision to make the crowbar that killed him one of Jason’s signature weapons is just SO dumb.)  As for the second tale, none of the Titans come off very well and the villains is a cartoonish dude-bro stereotype whose utter lack of humanity is grating in every single panel.  The art is okay in the first story of the issue, save for a noticeable lack of detailed background in the fight sequences (and the fact that Robin looks nine) and the second tale has really well-done art throughout.  Crush’s utter rage is written all over her face, while the team’s attempts to take down Joystick are well-blocked, with clear and exciting storytelling from panel to panel, but even that can’t overcome the unpleasantness of Joystick’s character and the skin-crawling rapeyness of the plot.

BOTTOM LINE: I DISLIKE MOST OF THIS ISSUE

I’ve been enjoying the Teen Titans ongoing series, so I was really surprised how poorly I received this comic book, but there’s not a page in this issue that fails to make me angry, irritated or put off.  Teen Titans Annual #1 features some solid art, a cast of characters that I like, and a pair of stories that fell entirely flat, with a truly despicable villain, earning 2 out of 5 stars overall.  Here’s hoping they can put this one back on track, as this title has had some fun moments lately, but this one would have been a real dud even at the normal $3.99 per issue price point.

A lot of 90s-style bluster and bombast with very little payoff, and even competent art can't overcome the mean-spirited story and dialogue.