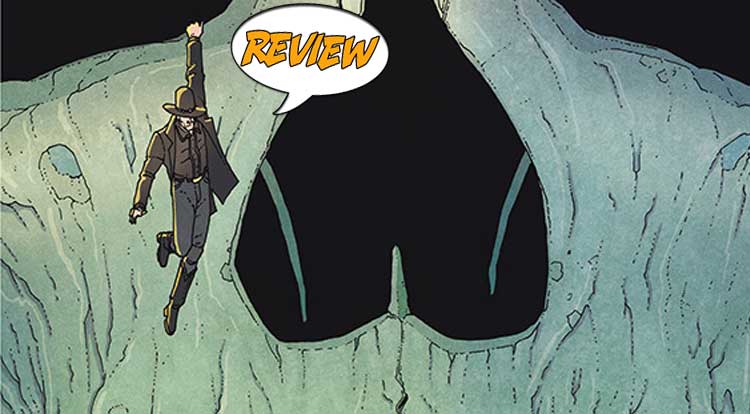 Ever wonder how the world used to be?  Your Major Spoilers review of Ice Cream Man #9 awaits! Previously in Ice Cream Man:  In the shadows, at the times you least expect him, the Ice Cream Man is always there, with his terrible, murderous grin.  But what about the old cowboy, the one who called him Riccardus?  Who are they?  WHAT are they?  And, most importantly, are they even human creatures at all?

THE OLD WEST, ONLY SOMEHOW NOT

We open at a time described as “longer ago than there are numbers to express”, we find Caleb, the mysterious cowboy, riding through what clearly isn’t the American Southwest.  He and his dog encounter a MASSIVE tarantula-style spider, a creature that absolutely should not be.  They slow long enough to kill it, with Caleb feeding one of its eyes to his pet, before continuing on to the home of The Old Man.  Neither Caleb nor his “uncle” looks entirely human, it should be added, but they have important things to discuss: Their universe is on its last legs.  They need to move on to the next world before this one completely goes under, but before The Old Man can explain how, Riccardus arrives, still somehow an ice cream man in a world where none of those concepts exist.  The Old Man explains that he has a book of rules for the next place, and there is only one rule to those rules: They MUST be obeyed.  Before they can set off, though, he must speak to Riccardus alone, leaving Caleb and his dog to their own devices.  That’s when the terrible things start to happen.

EVERYTHING IS ONE THING

It’s always fascinating to see a story tell us everything and still not explain exactly what’s going on.  That’s a pretty difficult row to hoe, to use this issue’s Western vernacular.  This issue is fascinating to look at, as Morazzo gives us three characters who are completely inhuman in very subtle ways, leading each panel of every page to have just the tiniest hint of Uncanny Valley discomfort, from their insectoid eyes to the pointed ears to the not-quite-human body language they all share.  I’m not sure I understand much more about Rick and Caleb than I did before the issue, but the effect puts the previous eight issues (most of which have served as done-in-one ‘Twilight Zone’ style interactions with humans) in a whole new light.  The question of where this book goes from here suddenly opens up in entirely new ways, and I’m really itching to see what comes next.  Prince’s unusual narration and dialogue make this issue feel unusually lyrical, almost as though we’re listening to a ballad, lamenting the loss of this familiar, yet entirely alien world.

Probably the biggest downside of this issue comes in the fact that it will probably make a terrible first issue for anyone who wants to start picking up this book based on my historical enjoyment of previous issues.  Ice Cream Man #9 is successful in telling us a story that reveals a lot about the only recurring characters without revealing all the mystery, while maintaining the book’s strange mystique, earning 3.5 out of 5 stars overall.  This might be the turning point for Ice Cream Man, like when Neil Gaiman’s ‘Sandman’ transitioned from those done-in-one vignettes into a huge tapestry of cosmic frippery, and I’m excited to be along for the ride.