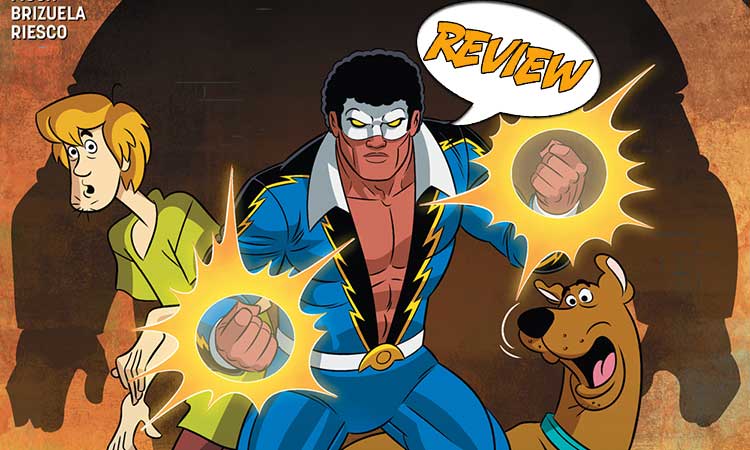 It’s Scooby and the gang. And The 100, who are a gang. And a ghost gang. Are the bad guys ganging up on the gang? What’s ganging….er…going on here? Previously in Scooby-Doo Team-up: It was a big-time adventure as Scooby, Shaggy, and the rest of the gang headed off to save the Earth with Mister Miracle and Big Barda. Granny Goodness and monsters from Apokolips were no match for our heroes!

DOWN TO EARTH AND TONGUE-IN-CHEEK

Scooby-Doo Team-Up #46 has our friends visiting Garfield High School, where Jefferson Pierce has brought them in for Career Day. Yes indeed, they are teaming up with Black Lightning! Right away we start out with poking fun at the standard Scooby-Doo tropes, such as closing out the story of one of their adventures with Daphne saying, “And they would’ve gotten away with it too—.“ There are a couple other gems, such as Fred commenting that he’s surprised how many people have never considered a career as a ghost-hunting detective. (I imagine most career counselors are happy about that.) I think there’s some genuine fondness for the source material behind the jokes, and it’s delightful. We also get the answer to the obvious question about whether Fred, Daphne, Velma, etc. should still be in school. (They graduated, but they’re studying further online. Even Scooby.)

They overhear a ruckus down the hall. Jefferson is concerned – they have gang problems at the school. But not, as Shaggy points out, like “Scooby and the Gang.” (Yes, this joke will come around again.) Some kids wearing black jackets with “100” on the back are harassing a smaller kid. They leave when Jefferson shows up. But then some ghost gangsters arrive! They call themselves the “Paulie Poltergeist Mob,” and are clad in pinstripe suits and appear to be a glowing greenish color.

Cue more riffs on “gang,” a brief distraction, and shortly thereafter, Black Lighting arrives. He confronts the kids from The 100, accusing them of having members dressing up as ghosts. They deny any involvement, and say they were running from the ghosts too. So he and everyone chase after the mobsters, who disappear. Just like ghosts. There’s nobody around but a couple students, who are excited to see Black Lightning.

We cut to some exposition, explaining who The 100 are, as well as who Tobias Whale is. Black Lightning decides to visit Tobias and talk with him about the ghosts. Fred wants to come along. Black Lightning says it’s too dangerous. Daphne says they never walk away from a mystery, so Black Lightning agrees to bring then along, if they wear disguises.

Black Lightning just so happens to have a friend, Peter Gambi, who is a tailor and who makes superhero costumes and who just happens to have a rack full of clothes that look like they came out of the 1970’s. (More on that below in the discussion of the art.)

The kids from The 100 tell Tobias about the ghosts, and Tobias is angered that they were scared. Before he can do anything to them, Black Lightning crashes in. There is a brief fight, and it turns out that Tobias knows nothing about any ghosts, and wouldn’t want to scare people out of the school anyway.

Velma remembers something. Back at Gambi’s shop, she finds another pinstripe ghost mobster costume. Could Gambi be the ghost? Of course not, but he did recently sell a couple of those suits. For cash. With no convenient record of who bought them. (Modern technology can really make detective work almost too easy.)

But, in perfect Scooby-Doo style, they set up a trap where Scooby and Shaggy appear to be menaced by The 100. The ghost gangsters show up, and Black Lightning unmasks them. It’s the two students who were wandering the hall earlier! They dressed up so they could scare The 100 out of the school, and just hid the costumes in their lockers. A convoluted plan, but alas, it did not work. Tobias and the gang members show up because Tobias wanted to see what was going on. He admits to being a criminal, but that no one can stop him. Velma records this, and there’s a tidy ending where they take down Tobias Whale, crack a few jokes, and the gang members decide to go straight and come back to school.

Basically they hit every riff that you expect in a Scooby-Doo tale, which is satisfying. But they also throw in a lot of bits from Black Lightning. This is fun if you’re familiar with him, but it’s very helpful if you aren’t. The story tries to strike some balance between the humor of Scooby-Doo and the seriousness of Black Lightning’s world, but it does tilt decidedly toward the former.

This is Scooby-Doo Team-Up #46, so you know it’s going to be a colorful book with art much in the style of the cartoon. And there’s nothing wrong with that. I thought it was funny that they brought the young detectives in for Career Day, and I loved the juxtaposition between their style and the young people in class, who look much more current. The ghost gangsters are classic, and just so goofy for something set today, and I enjoyed the over-the-top panicked reactions by everyone.

But they really had fun with Gambi’s shop, not only for poking fun at Scooby and the Gang, but with finding even more outrageous disguises for them. And giving them nicknames that also recall that time period. There’s Fred in his fringed leisure suit, Daphne in bell-bottoms, etc. Some of these outfits are in the colors we associate with the characters; some just have a nod.