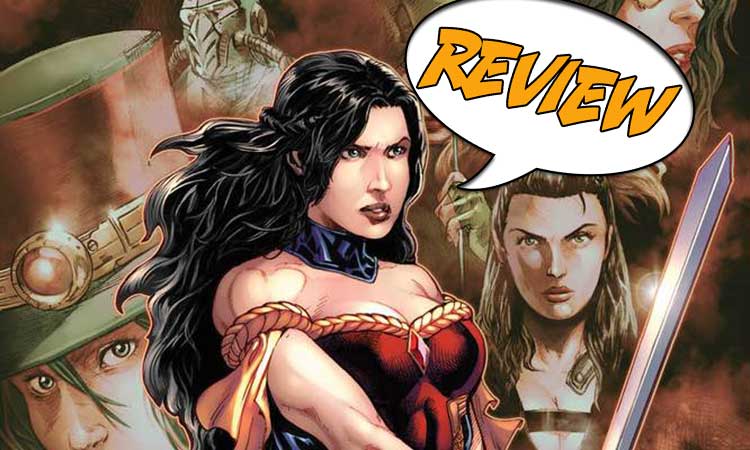 The Grimm Universe Presents 2019 is a solid anthology of stories which serves as a primer on the Grimm Universe and to update those who may have missed out on a few years of titles as to the current situations. It’s entertaining, and worth a look if you want to check out some action-packed comics that are a step away from the normal capes and cowls. Previously in GRIMM UNIVERSE: Founded in 2005 by Joe Brusha and Ralph Tedesco, Zenoscope Entertainment has become famous for their Grimm Universe titles. These titles focus on strong, sexy female protagonist and have become favorites of fans from all walks of life. Now they have published a one-shot, Grimm Universe Presents 2019, which gives a glimpse into some of the new, upcoming titles, characters, and storylines for 2019.

A MIX OF THE OLD AND THE NEW AND… THE BLUE?

This issue contains eight (8) different stories, each eight (8) pages long, each one either introducing a new character or situation into the Grimm Universe. The format could be seen less as an anthology, which it is, and more of a preview of things yet to come. As with any multi-story collection, it is often difficult to review all of the stories properly, so I will choose three of what I believe to be the best of the set. To be honest, sticking to my standard three is a little tough.

Hollywood Boulevard, California. A slender, well muscles woman dressed in lace-up leather and having a red and black Skrillix hair cut bums a cigarette off a kid. She’s on a job and the next step to finding her prey is within a tattoo parlor. This is Angelica, also known as Hellchild. The daughter of Hades, god of the Underworld, she was bitten by the vampire Dracula as part of an attempt to gain revenge on her father. It didn’t work out as he hoped. As a demigod, her vampire nature is suppressed. But after her father died, she learned she needed to indulge the vampire qualities of her nature to use her powers, it’s an act she does not like to do. We learn this as she stalks down the next link in the chain leading to her target, whom she soon corners at a card game. Bullets fly and allegiances are forged and tested, and Hellchild finds herself with a new situation. “Hellchild For Hire” is from writer Ralph Tedesco (Grimm Fairy Tales, Charmed) and artist Salvatore Cuffari (Grimm Fairy Tales: Apocolypse). Having never been exposed to this character before, I enjoyed what I have seen. The writing by Tedescao is good, and the art by Cuffari is excellent. He does not exactly have the same style as many associates with Zenescope, and that’s a good thing. He is much more mainstream comic art with an edge, and it gives a down to earth and real feel to the story. Hope to see more like this.

Meanwhile, in the late winter, a bard of sorts regales a Midgard tavern full of people about the tale of a dark warlord known as Sigfried Dragonsblood. He tells the tale of how Sigfried sacrificed 1000 innocents and sold his soul to the dragon of the mountains in a quest to gain power. His very hair, claims the bard, was stained red from the blood of those he slaughtered. He was determined to conquer Jotunheim, and in that quest he destroyed whole villages, seduces maidens, pillaged, and committed all sorts of evil and contemptuous acts. But can this demonic warlord really have been that bad, could anyone have been? And how will the bard react when someone appears who claims to know the true story? Nick Bermel (Grimm Tales of Terror) and Daniel Maine (Robyn Hood: The Hunt, The Musketeers) bring this tale to life, and it is sure to be a hit with lovers of fantasy. The characters are alive and hold their own on the page, and there is some nice writing. The bard’s words seem very lyrical and… well, bard-like. The nice little twist on the last couple of pages makes you want to hear more, and it looks like it will be a great tale when it picks up in May with its own series.

Then, deep in the swamps of Louisiana stands another type of tavern. This one is a bar named Gator Alley, and among the stuffed animal’s heads adorning the walls and the simple country folk living their life is a young woman. Her clean and braided blonde hair, tight clothes, and the myriad of archaic symbols tattooed on her skin mark her as an outsider, and she just wants to sit alone and have a beer. She is thinking of the life she lives and the cards she has been dealt. How she and her brother had been captured by a crazed witch, and her brother killed, how that changed everything. So when the simple, one-toothed local tries to strike up a conversation, she is not in the mood. She knows that her pursuer is coming, a witch is on the way. It will be a battle to the death, and when a victor is crowned, one will lose her heart for the fight. The Gretel tale entitled “Heartbreaker” is written by Ben Meares (Clive Barker’s Nightbreed, Titans) with art by Allan Otero (Revenge of Wonderland, Salem’s Daughter: The Haunting). It is more in line with the traditional Zenescope fare, but presents an interesting character with a nice twist to her powers. This one as well will be getting her own title, and it looks like it could become a fan favorite.

DANCE WITH THE ONE WHAT BRUNG YOU

Those three tales are not the only ones in this anthology. Terry Kavanagh (Marvel Comics Presents, X-Man) and J.G. Miranda (Wonderland,Purgatori) bring you a tale of The Black Knight in “Party Crashing”, and in the process introduce a new cast member in the form of super-powered Hercules Payne. In the Oz story, “On The Run” we are treated with Terry Kavanaugh’s writing again, this time with Marcelo Mueller (Lady Death, Warlord of Mars) on art duties. Here we learn of a civil war brewing in the Land of Oz, and heroine Dorothy Gale is gathering forces to help her wrestle control of the Emerald City from… Queen Dorothy? Dave Franchini (Spirit Hunters, Wonderland) and Renzo Rodriguez (Breathless, Grimm Tales of Terror) prepare Van Helsing for a battle against a force which will tax her as never before in “Daughter”. Joe Brusha (Grimm Fairy Tales, Charmed) and Leo Rodriguez introduce the character of Zodiac in the aptly named “A Zodiac Is Born.” Finally, legendary Howard Mackie (Ghost Rider, Spider-Man) and Babisu Kourtis (Paradise Court, Grimm Tales of Terror) give us a tale of Robyn Hood as she attempts to finish the “Side Job.”  All of the stories have something for new and old fans, and may serve as great jumping points for new readers.

The Grimm Universe Presents 2019 is a solid anthology of stories which serves as a primer on the Grimm Universe and to update those who may have missed out on a few years of titles as to the current situations. It’s entertaining, and worth a look if you want to check out some action packed comics that are a step away from the normal capes and cowls.