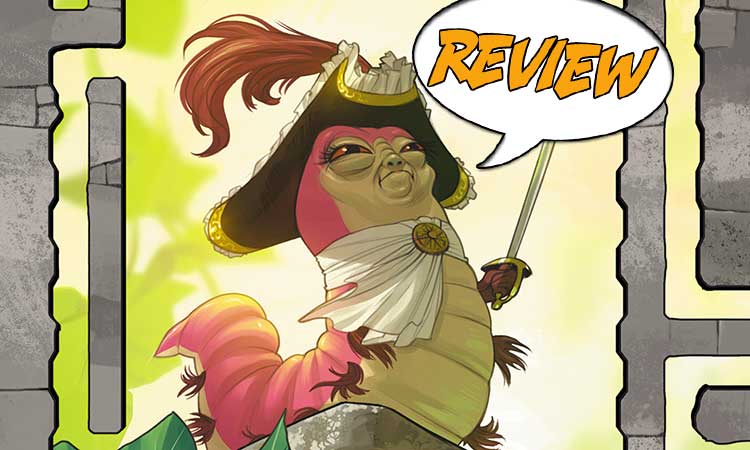 Does Maria have what it takes to resist the Owl King and get her baby, Jareth (yes, that Jareth), back? Previously in Jim Henson’s Labyrinth: Coronation: The Owl King traps Maria in her own fantasy of a Venetian party, where Albert comes back to her. With her out of the way, the Owl King reveals his plan to Skubbin, which is to sap baby Jareth’s strength so he can rule forever! Skubbin attacks him, but is thrown into the Labyrinth. The Owl King makes a construct of Albert and tells it to kill Maria, but not before the baby sees it and identifies it as his father. Albert indeed goes to kill Maria, but finds her painting a picture of her baby, which affects him somehow. Instead of killing her, he warns her. This helps her focus; she breaks free of the trap, is dragged underwater, and surfaces near Cible, Tangle, Skubbin, and a goblin army.

Maria is intent on reaching the castle in Jim Henson’s Labyrinth: Coronation #10, and this runs parallel to Sarah’s story. Indeed, it starts out with Jareth taking baby Toby away from Beetleglum. He orders another goblin to hide Toby, and sends his guards after the girl. Beetleglum tries to take the baby, but Jareth does not trust him anymore.

Then we shift back to Maria’s story, where she and her makeshift group come across an even larger mob of goblins. We get a few moments of realization and soul-searching. Maria thanks Skubbin, Tangle, and Cible in turn for their help, and essentially for each being who they are. On the one hand, it comes across a bit heavily. On the other hand, there are some really sweet thoughts about each of them, and sometimes it is rather nice to see someone thank their friends like this. I think, in real life, many of us drift toward taking others for granted or feel uncomfortable giving and receiving compliments. (And besides, if this story does run that tight a parallel to the movie, Maria may well be separated from everyone soon.)

The Owl King is getting impatient. There are but two hours left before he can siphon baby Jareth’s life away. He orders Beetleglum to send word to the goblin general to focus his forces on Maria. Beetleglum, who has grown rather fond of both the baby and his mother, trots off trying to think of what he can do. The Owl King is obsessive about ruling his kingdom, but cannot break its rules. He is holding baby Jareth, and the baby can take move the hands of the clock and reduce the time to an hour.

Beetleglum writes a note to the goblin general, but tells him to leave the girl. Septimus is in the shadows and knows what he has done, and vows to chase him down.

The battle among the goblins continues without much progress in either direction. Maria holds up Cible so she can give a speech. She tries to bring all the goblins together, but actually makes some astute observations about life in the labyrinth, and how they’re all doing the things the King expects of them, which is all just his being in control. She makes the point that the King isn’t all that powerful. (We’re so close to, “You have no power over me!”) Her speech unites the goblins, but not into battle against the King. Instead, they unite around the idea that being a goblin should be about having fun. It may be a little awkward, but it does serve to get the goblin army back out of the picture.

We close with Sarah working her way through the castle and coming upon Beetleglum sitting between two identical doors. She asks him about Toby. He ruminates on Jareth. They talk for a little while, and when she asks him for his help in finding Toby, he gestures to one of the doors.

SOME NICE CHARACTER WORK, BUT THE SAME OLD SCENERY

Jim Henson’s Labyrinth: Coronation #10 is the point at which the story has been going on for a long time, and we still have more to come. This issue is more about the dialogue and tying the past story to the movie’s plot. The characters are at the forefront and they’re solid. Beetleglum is starting to become more integral to the plot than just the convenient listener, so we see more of him. I like the way he and the other goblins look. It’s nice to see Maria have some fire in her eyes again, and Skubbin is back to being more heroic, and with a little less of the slapstick humor.

The backgrounds suffer a little more though. There aren’t any of the interesting little details we’ve seen in the past. Jareth’s castle is surprisingly bare – like all the effort went into drawing him as opposed to his surroundings. Maria’s big battle scene is set in place that is reminiscent of Venice. The architectural details are quite lovely, but they all fade to the background in shades of gray. For once it feels rather bland. There is a nice scene near the end with a couple large sea monsters slugging it out – symbolism of obstacles on the way to the castle – but other than that, there’s not much that stands out.

BOTTOM LINE: HOW WILL IT END?