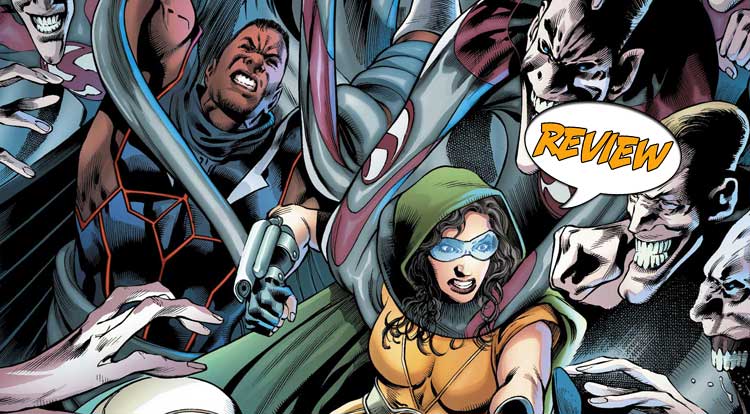 Previously in Freedom Fighters:  The Freedom Fighters go public in present-day Nazi America!  It’s been 50 years of fascist rule in the U.S. under Hitler and his heirs, and frankly, everyone’s had enough.  A new Freedom Fighters team makes a very public debut in hopes of rallying the people and re-igniting the long-dormant American spirit.  Phantom Lady, Black Condor, Doll Girl and Human Bomb strike a blow against the Gestapo’s Iron Police Force, but will it be enough to summon the long-lost Uncle Sam from retirement?

We open with a crowd of bystanders agape at the sight of heroes, standing against the iron-booted thugs of the Reich and openly standing against the fascist regime that has dominated their entire lives.  The Freedom Fighters (Black Condor, The Human Bomb, Doll Woman and Phantom Lady) engage a giant robot police dreadnaught, destroying not only the droid but a museum dedicated to the German victory.  Their attack not only energizes the folks in the streets, it terrorizes the rank-and-file Reichsmen, who fearfully send the word up the chain of command until we see the man in command of it all: Adolf Hitler II!  Most of the issue is explosions, as you’d expect from a battle issue featuring someone called The Human Bomb, with the team leaving flyers behind featuring the image of Uncle Sam, urging people to believe in hope again, to believe in freedom and bring Sam back to life.  Unfortunately, they’re not the only super-powered beings on Earth-X, and we end the issue with a super-stretchy Nazi agent awakening from sleeper status and demanding an audience with the Fuhrer.

The real star of this issue is the work of Eddy Barrows, providing exciting, clear blocking and very strong facial expressions on every page.  The redesign of the Human Bomb is the best costume that hero has ever had, in any incarnation, and the translation of Bozo, The Iron Man (an obscure Quality Comics hero, as are all of the characters on Earth-X) into the giant police robot is visually stunning.  The use of Bozo and The Blue Tracer, another minor Quality hero, appeals to my old-school nerd, and the use of Plastic Man, who also originated in the Quality stable is…  Actually, it’s terrifying.  I’ve never seen a Plas that scary.  The biggest flaw in the issue for me is one that probably couldn’t be avoided, as rather than a swastika, all the Nazi paraphernalia and machinery in this issue are festooned with a weird swirly mark that looks like a high-pressure front.  Given the laws about the use of that symbol internationally, as well as the current real world resurgence in the use of the thing, I don’t blame DC editorial at all, it’s just a little bit weird to see repeatedly in-story.

My biggest concern about this comic is that it’s a little TOO topical, but the story stays focused on the idea that hope can overcome even an occupying army, and does so successfully.  Freedom Fighters #2 goes by REALLY quickly while reading, thanks to the length of the fight sequences, and I wouldn’t have minded a little more delving into the minds of the heroes and bystanders, but looks great and makes clever use of some usually-ignored corners of Quality Comics history, earning 3.5 out of 5 stars overall.  Plus, I really love Doll Woman, in design and attitude.

This issue is all battle, but I enjoy the amount of character we get in that fighty-fighty, and the art is top-notch. I'm interested in seeing where this all goes.