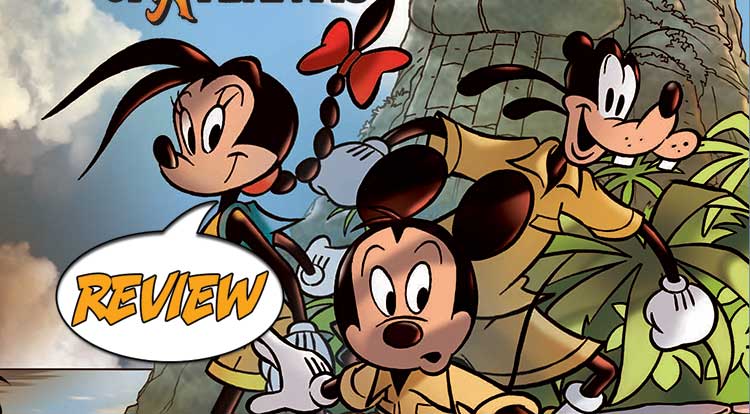 Mickey Mouse and the Fire Eye of Atlantis

Mickey Mouse, Goofy, and Eurasia Toft have been placed back on the trail of the lost city of Atlantis by what seems to be an unrelated opportunity for archeological discover. But the Horde of the Violet Hares are also involved, could it all be a set up to get the three compatriots out of the way once and for all? MICKEY MOUSE AND THE FIRE EYE OF ATLANTIS from IDW Publishing. Previously in MICKEY MOUSE: Mickey Mouse and his friend Goofy have been on multiple adventures around the world in the company of archeologist Eurasia Toft. Several times, they have crossed paths with the enigmatic secret society known as the Violet Hares, and each time the adventurers come out on top, spoiling the Violet Hare’s plans. Now the Hares, tired of being bested, have a new plan to take the group out of the equation once and for all.

ADVENTURE FROM THE HEART OF THE JUNGLE…

Grandmaster One, leader of the Violet Hares, is not a happy leader. In the past few months Eurasia Toft and her companions, Mickey Mouse and Goofy, have thwarted at least two Violet Hares plans. They ran amuck with the Hares’ plans regarding the Shadowlossues of Rhodes, and later cause them to lose the Orichalcum mine they had sought. Fed up, Grandmaster One demands the interference stops, and his Haremasters come up with a plan to do such that, and it all begins with cutting Eurasia’s funding through the museum.

Dr. Devonian informs Eurasia and friends of their cut in funding, and how the Curator of Cultural Affairs is adamant, no unnecessary research (on Atlantis in particular) occur on the museum dime. Dr. Devonian, seemingly as upset as the others, suggest they find a private sponsor to fund their efforts. This leads them to the telecommunications magnet named Abelard Monk, who wishes to speak to them regarding their adventures. Despite Monk’s dubious reputation, the team decides to meet with him. Monk, while on the surface a complete ditz, has the money and wants to fund the team’s research, he just wants to know what they want to do. When Eurasia tells him they want to continue their search for Atlantis, he poo-poos on the idea. Atlantis is a myth, he tells her, a fairy tale! He has something that will put them on a real trail and proceeds to show them a reel-to-reel film of a 1942 expedition to Africa. Mickey quickly recognizes The Horde of the Violet Hare as the mercenaries in the video, and stand amazed as they come under attack by what seem to be beams of light. The mercenaries scatter, and a strange female silhouette can be seen in the video, and she speaks. The last images on the film are of the mysterious woman warning the mercenaries to stay away.

Amazed at the film, Mickey takes the bargain immediately. Without knowing it, Mr. Monk has put them back on the trail of Atlantis, a trail that had gone cold after their last encounter with the Horde of the Violet Hares. Thus, they begin an adventure that will take them to the deep jungles of Africa, a hidden city, astronomical discoveries and a conflict with Haremaster Four leading to the depths of the Sahara and beyond.

As an added bonus, we get three short back-up tales from yesteryear as Lil’ Bad Wolf finds out how well the Three Little Pigs camouflage their house, Donald Duck inadvertently enters a yodeling contest, and then Donald Duck learns how little action can have big consequences. These adventures, from 1953, 1996 and 1974 respectively, are short and fun, coming from the Netherland title Donald Duck Weekblad and the United States comic Four Color.

… TO THE DESOLATION OF THE DESERT.

The lead story in this trade appeared in Walt Disney Comics and Stories #741 and 742, published by IDW. However, it first appeared in the Italian title Topolino #3177 in 2016. Jonathan H. Gray has translated the story by the original Italian writer, Andrea Castellan, into English.  Overall, the story is exciting and action-packed. Mickey and friends continuing conflict with the Horde of the Violet Hare has given roaring tales and are every bit as thrilling as anything on the market. The character of Eurasia provides the springboard for the adventures, and it has a different feel than what many may be used to. Until recent years, the comics featuring the Disney characters have gone through a very uneven publishing history. It is easy to remember they have been in almost non-stop publication overseas, and that is where seventy-five percent of the stories in this book hail from. It proves to be an enjoyable read, even if there are a few translation issues. For example, on the second page, panel one of The Fire Eye of Atlantis, the Grandmaster says, quote, “ENOUGH IS TOO MUCH!”  While it may be an exact translation, it hits the tongue a little off. Examples like that only happen occasionally and do nothing to detract from the overall enjoyment of the story. Likewise, the three shorts are just that, short. The Lil’ Bad Wolf tale is one page, and the two Donald Duck offerings are two pages each. They are fun quick little takes on classic tropes.

BOTTOM LINE: FUN AND EXCITING TRANSLATIONS FOR ALL AGES