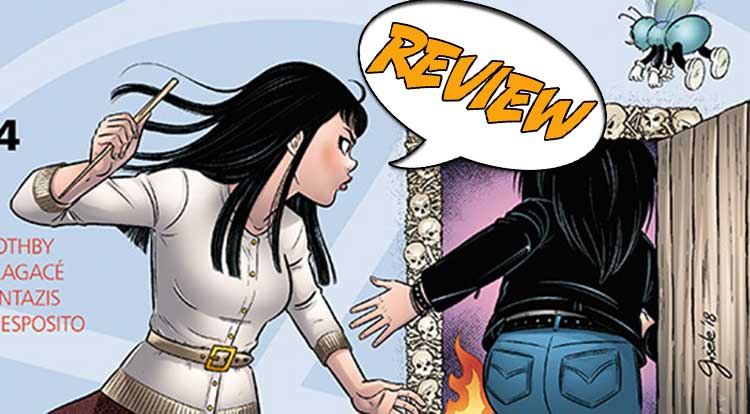 First, angels falling to earth and vanishing without a trace. Then a hapless thief sells his soul to the devil in the alley. Just what is going on here? Previously in Exorsisters: Cate and Kate are not exactly sisters – Kate is Cate’s soul, thanks to some dark dealings their mom got into. After a courtroom drama from Hell – or in Hell – Cate is visited by an old boyfriend, Buzz, who just happens to be a fly right now. He has come to Cate to tell her that Beelzebub (his master, who turned on him…it’s a long story) has been killed. As if that wasn’t enough weirdness, there is movement past their window and they look out and see angels plummeting to the ground.

TWISTS, TURNS, AND A LITTLE GOOFINESS

Exorsisters #4 starts out as one might expect, with Cate and Kate looking for some trace of the angels outside their building. They hear someone cry out for help – someone is stealing his soul! Well, it’s a little odd, but it is up their alley. They turn the corner into (of course) an alley, only to see a guy along with…Satan? At least it’s a guy in a red suit and cape with horns, a little pitchfork, and a contract. Kate goes after him, there’s a flash of light, and she’s blinded, and the devil disappears. They bring the other guy, Drew, up to their office to tell his story.

Drew had just gotten out of prison and was having a hard time, so went back to robbing people (although not very well). He was down in an alley, and Satan appeared. Drew offered to sell his soul so he could become a great criminal. The deal worked out, sort of. Drew robbed three banks without getting caught. However, he could not get away with the money – freak accidents kept happening to make him lose it all. So he went back to the alley to get out of the deal, and found Satan still there. Meanwhile, Cate was looking online and found that the Satan outfit was a costume. There was no actual deal with the devil; Drew is fine and should be free to go. But she gives him one of their cards, in case he actually does get into trouble.

As he’s leaving, Drew runs into Cate’s mother. She offers to help him. He thinks she’s flirting with him, but then her shadow offers to help him – if he’ll return the favor. All Drew wants is a way to get back at that fake devil, so he agrees. Drew walks off with Cate’s mom, leaving his shadow stranded without him.

We next see the girls back in the alley again with Kate dumpster diving. She finds a feather, and a guy in a red robe runs up, claiming it’s his, and there’s a flash of light. He is an angel. They take him to a local coffee shop for some explanation. A couple days ago, a great darkness surrounded Heaven, cutting several angels off. Anyone that touched it fell to earth and vanished. He, luckily, landed in the dumpster when he fell and survived. When looking for a disguise, he found the devil costume, and then Drew found him. Angels can’t lie, so while he did turn Drew into a master thief, he also made sure that only good works came from his thefts.

It turns out the feather the girls have is not an angel feather. The angel has a brief flare of anger, shattering plates and cups and cracking windows. Oddly, no one in the café seems to notice. Kate sees that they’re also missing their shadows. In a panic, the angel says they’ve been claimed by the First Shadow, and sends the girls back home to their office.

This is not like anything they’ve ever heard of, so Cate starts researching. Then the business card they gave Drew appears – he’s in Hell. This is something they can do something about. At the same time, their mom is talking to the angel. She is coldly angry. He let slip a name, and now Cate is getting involved instead of being safe. Several shadows grab hold of the angel and pluck handfuls of feathers from his wings. In the office, Cate mentions the First Shadow and Buzz (the ex-boyfriend-in-a-jar) pipes up to say that’s who killed Beelzebub. Kate summons a door to Hell and they open it only to find blackness. Buzz cautions them not to touch it, but Kate does, and their office is flooded with blackness.

The art of Exorsisters #4 is so crisp and clean. I love the detail in both girls’ outfits, which sets them apart at a glance. But I also really like how expressive Kate, as the soul, is – everything flashes across her face. She is impulsive in her actions, vibrant, and often funny. It’s a stark contrast with Cate, who is lovely, and clearly her “twin,” but she has a more limited range of emotion. As the story progresses, we see them much more as person and soul, divided and never quite whole.

I quite enjoy the humor of Buzz as a character. His origin (Exorsisters #3) was imaginative and funny. The concept of him as ex-boyfriend, whom Cate has stuck in a jar, is amusing, especially since he has cartoon style white gloves and shoes. This is a book that has a lot of lighter notes in a story that is actually pretty dark if you look at it closely. Cate’s mom is either outright evil, or is possessed by something evil, and her shadow is definitely creepy. Shadows that operate independently of their people is a theme that has appeared in stories before, but I think it fits well in this story