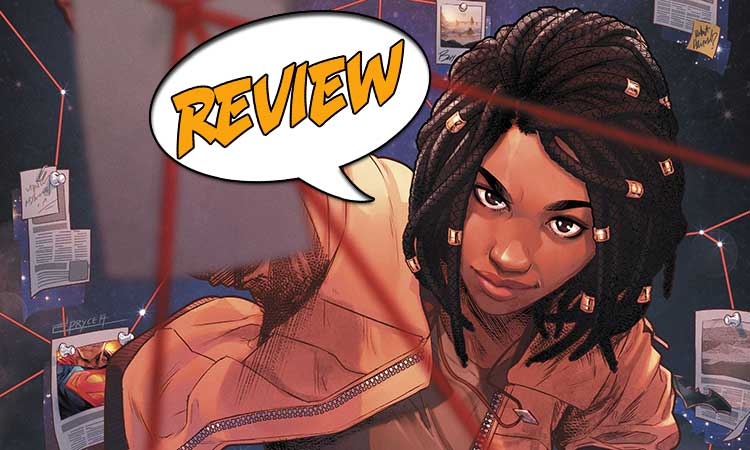 Superman fights a villain in Naomi’s hometown – an unheard of event for them, or is it? What aren’t people telling her? An all-new mystery starts here in a normal, American town. Naomi has a bit of an obsession with Superman, and when he comes to her town, she starts asking questions and finding that no one wants to answer.

Naomi #1 starts out with bits of conversation from several people, from which we get the idea that something BIG happened, something that never happens here. Then we flashback to what happened – Superman fought a villain along the main street just yesterday. Everyone is out and talking about it and looking over the considerable damage, including Naomi, who is with her friends and who apparently missed the whole thing – all seventeen seconds of it. Later, at her job, Naomi keeps searching her phone to see if there was any mention of it anywhere, and then her friend messages her – Superman is back! Her understanding boss lets her take a short break.

Superman came back to help clean up. (I like when stories deal not with the superheroes directly, but with the various consequences from their battles and interactions with normal people.) Naomi gets there in time to see him leave, but not soon enough to see the whole thing. Again.

When next we see her, she is talking with her therapist. She’s been seeing her for some time, and this time they talk a little about her Superman Complex. She doesn’t want to be Superman, but like him, she was adopted. And maybe, in her heart of hearts, she wants to turn out to be special too.

That evening, the young people get together and talk about stuff, a lot about Superman, and it comes out that there was a previous superhero thing that happened in town some time ago, although nobody seems to know much about it. This piques Naomi’s curiosity and she asks around – and finds out nothing.

Then she thinks of Dee, who is a large, tattooed man, rather intimidating looking. She asks her friend Annabelle to go with her. Annabelle scoffs – her mom told her there was no superhero thing in town, and her mom wouldn’t lie! She won’t go with her. So Naomi goes alone. She doesn’t quite know how to begin asking, but just does. And he says he does remember it. But he wasn’t there. He didn’t see it. And he doesn’t want to talk about something he didn’t actually see. And there the conversation ends.

Until he gives her the date, which was exactly the date that Naomi was adopted.

A SLICE OF LIFE WITH ADDED SUPERMAN

The story of Naomi #1 is mainly about normal people in a Pacific Northwest town. Right from the start we see a variety of people, a lot of young people, who are excited – and oh so human. (Imagine dropping your phone on the day Superman has a fight in your town!)  There’s a similar page deeper in, when Naomi is trying to find out about the past, and she’s questioning mainly adults. I like the contrast in body language – the teens are so open; the adults, on the other hand, are very closed, not to mention evasive.

When normal people are being portrayed, so much of the story gets told through non-verbal means, such as facial expression and body language. Or I should say, it really enhances a story when this can be done. And it is terrific in this book. Naomi so often wears the shadow of a frown, because things aren’t working out; because she’s not getting answers; because she’s sure there’s something out there and doesn’t want to be wrong. I love watching all of this flash across her face.

BOTTOM LINE: WILL DRAW YOU IN