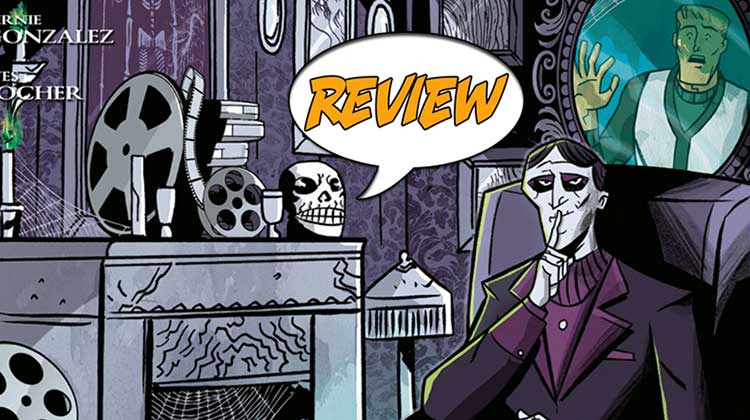 Mysteries are always great fun to read, in my opinion. Trying to figure out “whodunit” is a nice mental exercise, so I enjoy it a lot, especially when the solution makes sense.

Of course, add some supernatural elements to it, and mostly all bets are off! The challenge is to make the mystery engaging and still relatable, and that’s what Alterna Comics’ Midnight Mystery does superbly!

SOLICITATION: After being captured by a double-crossing client, paranormal detective Zeke King must fight for his life against a sinister spell!  This mystery and suspense series is perfect for fans of Supernatural, The X-Files, and Batman: The Animated Series!

THE KING, THE MOVIE STAR, AND THE SON

In the first issue of this miniseries, Detective Ezekiel “Zeke” King is hired by the helper of movie star Roland Blackwood, otherwise known as Count Karloff in horror films. King is to find the star’s long-lost son. Zeke and Blackwood’s son end up unconscious, and when they wake up, they’re not in a good place.

One of the great things about this comic is that Gonzalez doesn’t play all his cards at the same time. For instance, we don’t know what is really going on until he get further into this second issue. Also, there’s another player in this situation that we don’t meet until things start to unfold, and that confuses things even more!

I enjoy the main character, Zeke, an older private detective who doesn’t have all the capabilities he used to enjoy. That makes him have to struggle more, and we can relate to him more than someone who is younger and much more athletic. He’s much more cynical as a result, and he’s particularly unhappy when he’s outwitted. Needless to say, he’s unhappy for much of this second issue.

If you think you know where the story is going, I doubt it! This issue, like the first, is full of twists and turns that had me wondering, “NOW what’s going to happen?” Love that in this type of comic!

The most fascinating part of the story to me was the skull, the “talking head,” as it were. Turns out it has a very important part in this tale, something the son may learn to regret happening later in the issue. This is also where the supernatural doings take off!

That reminds me—Bernie pulls a “Marvel movie” kind of surprise at the end of the book. You see the credits appear in the lower right of the last panel on a page, so you might think the tale is finished. Don’t you believe it! Don’t leave before you turn the page for a continuation where things for one character go from bad to worse. Since this is only the second part of a four-part miniseries, I have a feeling we’re going to see what happens after this last sequence in upcoming issues.

THE ART WORKS WELL WITH THE STORY

Bernie does a wonderful job of mixing subtle colors with his art, and the effect is a strong one. The red backgrounds, of course, are reminiscent of Batman: The Animated Series, which inspired some of the style used in this miniseries.

I love Gonzalez’s ability to show facial expressions across the board regardless of the character. I also felt his talent in portraying action sequences is great, clearly showing who is doing what to who.

I was particularly intrigued in that I didn’t really notice the fact that the paper is newsprint, which reduces the cost so they can charge only $1.50 per issue. On many levels, the book transported me back in time when that was common practice in the industry.

Will the story in issue #3 pick up from #2? It doesn’t look like it since the title for next time is going to be “The Burning Bride,” and the description doesn’t indicate any continuation. But I highly doubt this is the last we’ll see of Blackwood and his son. Perhaps #3 and #4 will be another two-issue mystery. Or they might show up in future miniseries’.

If you enjoy mysteries that keep you guessing and have supernatural elements that also keep you wondering what’s going to happen next, I highly recommend you get this comic. If you would like to hear more about Midnight Mystery from Bernie, be sure to listen to my conversation with him during Episode 344 of my podcast, which you can listen to at this link: http://majorspoilers.com/2018/08/26/waynes-comics-podcast-344-bernie-gonzalez-cameron-petti/ or read more at this website: https://www.mysterycomic.com/.

If you enjoy mysteries that keep you guessing and have supernatural elements that also keep you wondering what’s going to happen next, I highly recommend you get Midnight Mystery.