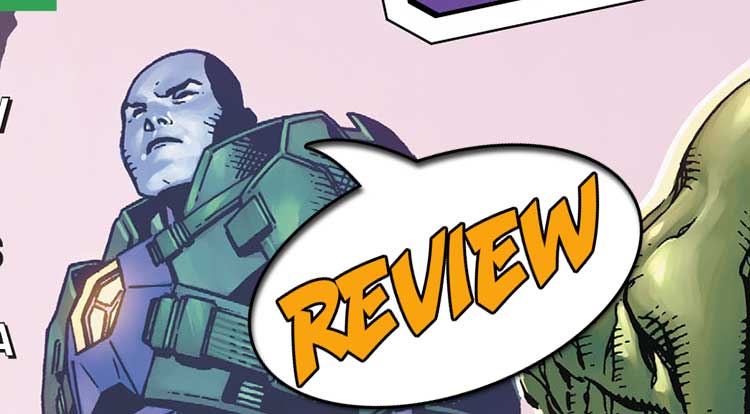 Are the secrets of the past destined to doom the universe in the present? Find out in this exciting conclusion to Escape from Hawkworld! Previously in Justice League: Martian Manhunter, John Stewart, and Hawkgirl all traveled to Thanagar-Prime, searching for answers. J’onn gets them to a safe place where he had lived there in secret and where they can plan how to get into the vaults. Kendra has seen that one of the last living Martians is being held there, against her will. It is not easy to sneak in, but with an elaborate plan that involves disguises and Green Lantern making kryptonite by willpower, they manage. Shayera Kol, Empress of Thanagar-Prime catches up with them; the Green Lantern Corps arrives to arrest John Stewart, and with them as a distraction, Martian Manhunter reaches the Martian Keep who tells him the Thanagarians are desperately hiding something. Back on Earth, Superman, Wonder Woman, and Batman work to keep Starman from going Nova. This is all connected to the Totality – and to someone called Perpetua!

ANOTHER GRAND STORY RELATED TO THE TOTALITY

Justice League #16 packs a lot of story (and a lot of history) into its pages. It’s never anything small and simple with the League! We begin by learning of an ancient myth about a universe that existed before our own, a perpetual universe shaped by an all-powerful cosmic mother wielding the seven energies of creation – and dark energies, at that. All evidence of her has been hidden for millennia because if her symbol should ever become unlocked, she too would return.

Martian Manhunter learns this from the Martian Keep, imprisoned and being used by Shayera to power the Absorbicon she wears. He also learns that Perpetua is nearly formed. We learn more about the symbol as well – it represents the Source Wall, the division between the positive energies and the dark energies. But the Martian Keep is dying. When she goes, Thanagar-Prime, which is mostly an illusion maintained by the Absorbicon, will also fall away.

Kendra fights Katar, trying to talk some sense into him. But he doesn’t speak, and he never has in this story. Shayera explains that he can’t hear – she has not yet been able to restore him entirely. At the same time, John Stewart gets dressed down by Kilowog. He tells the Corps he’s trying to save the last two Martians alive, and Kilowog says he should have reported this to the Corps. I actually like that the police vs. vigilantes/superheroes plays out on a bigger scale than just on parts of Earth. It allows for some conflict that has more nuance.

Perpetua had a race of warriors under her command as well, and as it happens, they were a genetic combination of Martian and human. When the universe was set right the first time, the species were split apart. (I don’t think genetics quite work that way, but is an interesting take, and it gets the next part of the tale to fit in.) Some scientists on Earth figured this out, and, in the tradition of mad scientists everywhere, decided to re-engineer the warriors. J’onn was abducted as a child and involved in these experiments. He is the only remaining Martian because he has a part yet to play in all this.

In the fight with Kendra, Shayera announces that she is planning to seal her in it forever and continue rebuilding her civilization, changing reality if necessary. At this point, the Green Lantern Corps steps in to arrest her. She uses the Absorbicon to create more warriors to fight them. This pushes the Martian Keep to her limits. She tells J’onn that the symbol has two meanings – justice and doom – and he must tell the multiverse which shape to take. I like that take on justice and doom; it’s been a running theme in Justice League, and that helps tie these various stories together in the larger picture.

J’onn confronts Shayera, telling her keeping up in this way will only kill her and doom her people. She hears and understands, removes the Absorbicon, and her world fades into dust. Shortly thereafter, a wormhole opens, and Starman and the Trinity arrive. He releases a part of Shayera that was also a part of Kendra, and tells her that she still can and must rebuild Thanagar-Prime to save her people. The Green Lanterns decide not to bring John Stewart in…this time, and admonish him to call on them in the future. And we’re coming up on time to fix the Source Wall!

A LOT OF HISTORY AND DRAMA

The art in Justice League #16 is solid. Considering how much verbiage there is, the art has to work around a lot of speech bubbles, and it does this deftly. The order of the text is perfectly clear as well. Some panels are a bit crowded, but thankfully they’re in the minority, and there are some places where the art has more room to stand out.

The combat scenes and the portrayal of the Thanagarians are great. That’s a lot of wings to have to keep track of, but when they’re done well, they really add to the sense of movement in the fight. The two-page spread where J’onn finally gets through to Shayera is quite nice; through him, we can see why she’s doing what she’s doing, but by listening to him, she can see that she was wrong. Her realization makes sense, although it does feel just a bit rushed.

The wormhole panels, prefaced by the justice half of the symbol, are quite lovely and have a nice bit of sound effects with them. It makes for a dramatic entrance of another chunk of the Justice League.