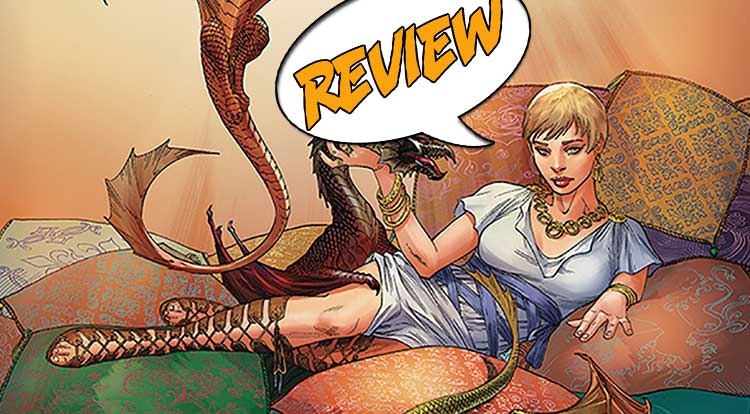 Game of Thrones: A Clash of Kings #15 Review

Game of Thrones: A Clash of Kings #15

A Clash of Kings #15 demonstrates that not all of GRR Martin’s writing revolves around stunning twists and acts of bloody violence. He has created a world filled with what feel like real people, with real desires and motivations. At the hands of Walker and artist Mel Rubi (whose naturalistic artwork is fantastic), this adaptation brought to mind my thrill and excitement at reading the earliest books in the Song of Ice and Fire. This issue is a compelling, absorbing read, and one I highly recommend to you all.

The adaptation of A Clash of Kings continues as Ned Stark’s widow, Catelyn, attempts to gather forces sufficient to defeat the Lannisters and avenge her husband’s execution.  But brotherly rivalry dooms her efforts.  Meanwhile, her daughter Arya, finds refuge in the ruins of Harrenhal, nursing her hatred, and like her mother, looks to seek revenge on those who murdered Ned Stark… GAME OF THRONES: A CLASH OF KINGS #15

Previously in A Song of Ice and Fire:  A Clash of Kings:  Phew, where to start?!  Robert Baratheon is dead, murdered by his own family.  Ned Stark, Warden of the North and friend of Robert, is also dead, outmaneuvered onto the executioners block by the Lannisters.  War has come in the form of a clash of kings, and while Ned Stark’s widow Catelyn attempts to forge an alliance to confront the Lannisters at King’s Landing, her daughter Arya, faces an uncertain future as she nurses her hatreds in Harrenhal…

A Clash of King’s #15 is startlingly good.  The source material helps, of course, as Landry Walker continues his adaptation of GRR Martin’s second novel in the sequence.  But there is a real skill in adapting such a long work, being able to tease out the strands and bring them to a new medium.  And Walker does exceptionally well, creating mood and tension and drama out of what is essentially a series of long conversations between protagonists.  Unusually for a book in this series, nary a sword is drawn, and the only violence occurs off-screen.  But the writing is strong, and the very last panel an astonishing marriage of writing and art.

Twin tales feature in this issue.  Catelyn Stark attempts to mediate between Lord’s Stannis and Renly, surviving brothers to slain King Robert Baratheon.  Catelyn hopes to forge an alliance capable of bringing down the Lannisters ruling through Joffrey in King’s Landing, but instead finds to brothers more interested in squabbling with each other, than agreeing to disagree.  Her quiet dignity as she is forced to listen to the brother’s idiotic conversation makes her the more reasonable character, and if not for the incredibly weak position she has, she would be the ideal figure to lead the crusade south.

The other segment concerns Catelyn’s daughter, Arya, lost since seeing her father executed at the end of the first book.  I remember reading that sequence way back in the mid-90s, and even though by that point I’d read hundreds of fantasy novels, the sheer bravura storytelling by Martin and the audacity of setting up a main character just to knock him down left me speechless.  Arya is similarly knocked about, far from home and hearth, with no family around to protect her.  Seeking refuge with what few friends she has made in Harrenhal, she spends her time seeking to not be noticed, while praying nightly for the death of those who had a hand in killing her father and scattering her family.

Walker’s writing in this issue is strong and effective.  What could’ve been boring conversations between characters instead comes alive on the printed page.  Every sensible suggestion by Catelyn is met with nitwittery by Stannis and Renly, more intent on one-upping each other than seeing the larger strategic stakes at play.  Renly’s pomposity is ably portrayed, so well, in fact, I felt if he had stood in front of me babbling as he does, I’d be obliged to strangle him and expect to be thanked.

While grand stakes are at play in Catelyn’s story, the real punch in the issue comes from Arya’s.   She is in a pitiable state, forced to hide deep within Harrenhal to avoid those who might do her harm.  When she does emerge, she faces those who wish her family ill.  She creeps about like a mouse, discovering morsels of information about the outside world.  She nurses her grievances, praying nightly that a series of men suffer for what they have done.  When she confronts Jagen H’Ghar, who she helped save in an earlier issue, he repays her by granting her three lives – lives she can claim in the name of vengeance.  As I mentioned earlier, the look on her face, and her thoughts as displayed on the page present a powerful ending that bodes well for the rest of the series.

A Clash of Kings #15 demonstrates that not all of GRR Martin’s writing revolves around stunning twists and acts of bloody violence.  He has created a world filled with what feels like real people, with real desires and motivations.  At the hands of Walker and artist Mel Rubi (whose naturalistic artwork is fantastic), this adaptation brought to mind my thrill and excitement at reading the earliest books in the Song of Ice and Fire.  This issue is a compelling, absorbing read, and one I highly recommend to you all.