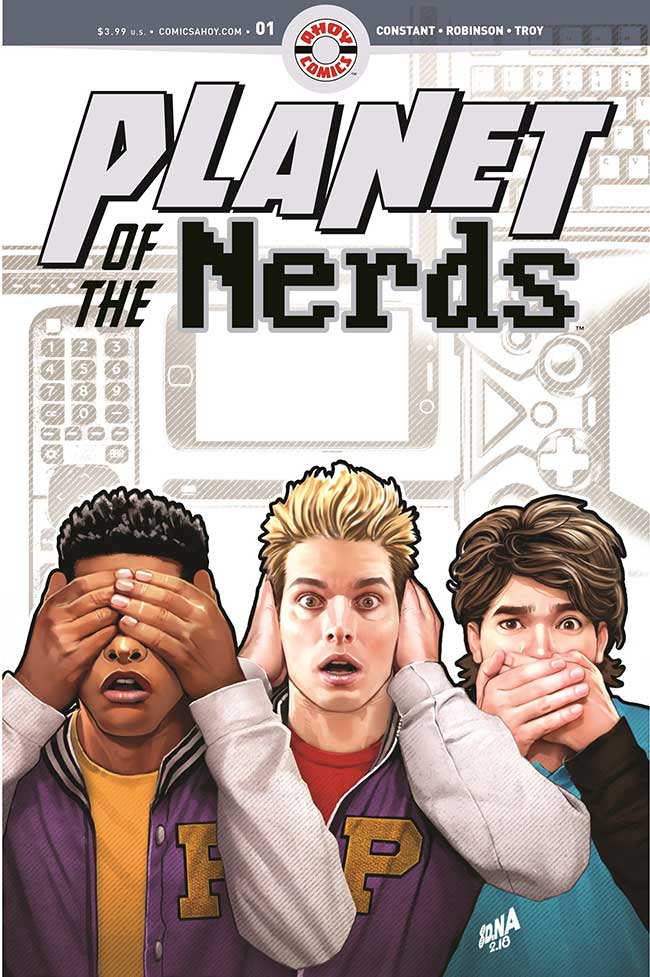 “We weren’t kidding when we said It’s time to expect more from comics,” said AHOY Comics Editor-in-Chief Tom Peyer. “We’re committed to infusing our comic book magazines with fun, humor and eclectic extra material. And I think it’s safe to say that AHOY Comics is the only publisher that has published a chicken-fried steak recipe by Mark Russell, craft cocktail recipes for troubled times by Seattle Times’ food writer Bethany Jean Clement, cartoons by Shannon Wheeler, and prose fiction by writer Grant Morrison.” “From its jawdroppingly odd first page to its hilariously insane last, BRONZE AGE BOOGIE sets itself apart from every other comic in the best possible ways. I loved every insane minute of it.”
—Matthew Rosenberg (Uncanny X-Men, The Punisher, 4 Kids Walk Into A Bank)

“It’s like skateboarding uncontrollably through 1970s comics with kaleidoscopes strapped to your eyes — but in a good way! I mean, I guess they could have called it SAVAGE SWORD OF THE PLANET OF THE DEADLY HANDS OF THE WORLDS ON THE LOOSE…but BRONZE AGE BOOGIE is, at the very least, shorter. Don’t miss it!”— Kurt Busiek (Astro City, Marvels)

What do you get when you combine all the best-loved comics genres of the 1970s: apes, monsters, Kung Fu, sword-and-sorcery, and cosmic adventure? You get BRONZE AGE BOOGIE, an intense, character-based action-fest with plenty of style! In this collector’s item first issue, young barbarian princess Brita Constantina finds herself battling a Martian invasion—in 1975 AD and BC! Back-feature: Meet MAJOR URSA, the first bear in space. But will he be a hero or a villain? Plus the usual assortment of AHOY text stories! “PLANET OF THE NERDS #1 captures the goofy joy of 80s classics like Revenge of the Nerds, Back To The Future, and Real Genius. Then, with the most elegant of plot twists, it updates the story for a different age. Smart, fast paced and beautifully drawn.”— Gene Ha (Mae)

“We all know that nerds won the great nerd/jock battle of the 80s, but what if a bunch of jocks were frozen in time and emerged not knowing the war was over? That’s the question PLANET OF THE NERDS asks, and the answer is, ironically, delightfully nerdy nerdy fun.”—Arthur Wyatt, (Judge Dredd)

“This is a really good bit.” — Daniel Kibblesmith (Santa’s Husband)

“AHOY’s offerings so far have been a celebration of a comic world won by all us geeks. Planet of the Nerds continues that creatively invigorating streak while also serving as a cleverly written, beautifully illustrated cautionary tale for non-comics bullies everywhere.” — Chris Ryall, President & Publisher/CCO, IDW Publishing

Three high school jocks in the 1980s are accidentally frozen by an experimental cryogenics device, only to be revived in the computer-driven, superhero movie-loving world of 2019–an era ruled by nerds! PLUS! A backup series explores the characters’ origins. EXTRA! Prose and pictures by the finest talents in and out of comics. “HASHTAG: DANGER! is the greatest thing since sliced bread, and, as we all know, sliced bread is pretty great—vastly superior to unsliced bread which has to be pulled apart with your fist like an animal.”— Erik Larsen (Savage Dragon)

Exploding from the pages of High Heaven, three scientific adventurers face strange creatures, lost civilizations, and supernatural threats–when they’re not too busy being complete jerks to each other. PLUS! Follow the depressing misadventures of Snelson, an over-the-hill comedian who peaked in the 90s. EXTRA! Pics, prose, and possibly poems! Three dazzling short “pilot” stories from AHOY’s finest – and YOU get to vote on which series continues! In “Noah Zark” by Mark Waid and Lanna Souvanny, an alien boy is kidnapped into an interplanetary zoo—and becomes the protector of the animals. In “True Identity” by Tom Peyer and Alan Robinson, we learn what secret anguish drives the most beloved superhero on Earth! And Stuart Moore and Peter Gross’s “Bright Boy” tells the grim tale of the world’s smartest human—and the havoc he leaves in his wake.

“Our aim at AHOY Comics is publish quality stories, backed up by engaging extras that are worth our readers’ time and attention,” said Bronze Age Boogie co-creator Stuart Moore, freelance writer and AHOY Comics “Dark Ops” Manager. “The launch titles included a parody of Edgar Allan Poe, a superhero satire, and a galactic epic with cats. Now people will see: AHOY is just getting started.”