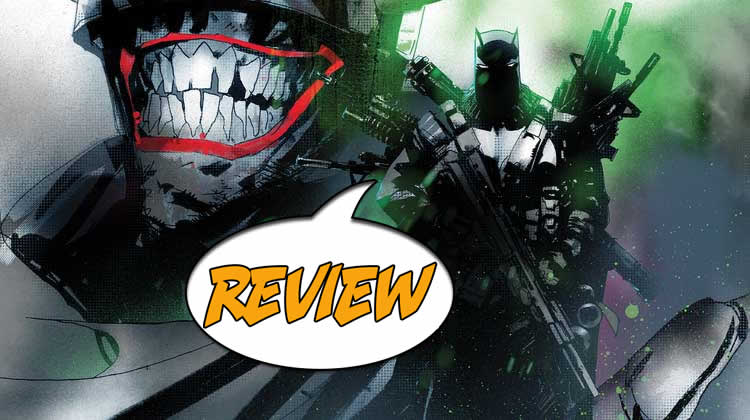 The Batman Who Laughs #2 Review

It’s been a while since I’ve read a Scott Snyder Batman story. I know, I know… he’s writing the Dark Knight in Justice League, but as great as that is, it’s not quite as undiluted as his stellar run on Batman was.

Taking some time off from Batman seems to have let Mr. Snyder really write his very best because, wow, The Batman Who Laughs is something special!

THE BATMAN WHO LAUGHS #2

SOLICITATION: After the shocking ending of issue #1, a ticking clock sets Batman on a trail throughout the different realities of the Multiverse. He starts to see all the iterations of his life, and what could have been…but more importantly, Bruce Wayne begins to deduce that his current life is somehow wrong, and that all the mistakes he’s made are somehow connected. Meanwhile, the Batman Who Laughs raises the curtain on his second act, pulling out the big guns to break into Arkham Asylum…enter one of the most punishing Batmen of the Dark Multiverse: The Grim Knight!

THE JOKER, THE GRIM KNIGHT, AND BATMAN

One of the greatest creations of the recent Dark Multiverse group of comics has been The Batman Who Laughs. This works for me on several levels, including the fact that the Joker was originally based on a film called The Man Who Laughs. The fact that, in another universe, Batman became something like the Joker still stuns and intrigues me. That he’s come after “our” Batman really fascinates me.

There’s one panel in particular that shocked me, and that was one where, early in the book, Batman is standing there with multiple needles are pouring Joker anti-toxin into Bruce Wayne’s body. At the same time, Alfred is performing heart surgery on the Clown Prince of Crime in an attempt to save his life. Yikes!

It’s so tempting to spoil so much of this issue because so many surprises happen from page to page. For example, and this is the creepiest so I’ll only use this one, the Joker still laughs even though he’s in a coma. He’s done it so much that he still does it even while unconscious. Yuck!

Just when you think you might have a clue what Snyder has coming next, you are going to be shocked. There’s a battle between “our” Batman and the Batman Who Laughs, and it’s full of unexpected turns—at least, it surprised me!

Also involved are Commissioner Gordon, other people who are named “Bruce Wayne” in Gotham, and Wayne Tower. Let’s just say that not all of the above survive.

The pacing is quick, never letting us catch our breath or attempt to sort this all out. The characterization is, of course, totally on mark, and I’m not the only one shaken by all this. Even the Dark Knight himself is struggling to maintain control.

It’s really Batman’s worst nightmare—facing himself if he were turned into the Joker. It’s ghastly and the kind of story I can’t pull myself out of when I start reading it.

And we still don’t know the entire truth behind the Grim Knight as well as his role in all this. Leave it to Mr. Snyder to tantalize us from issue to issue, wondering just what this version of Batman has to do with it all.

Jock does a tremendous job in both aspects of comic art that I like to measure—facial expressions and action sequences. When Batman yells at Alfred at one point, I could hear his voice coming through the page. Also, during the aforementioned battle between the Batmen, “our” Batman deduces that his opponent is leaner than he is, so he’s faster. However, the Dark Knight knows he’s stronger. Still, the fight literally hurts as I read it, as Jock portrays the damage each is inflicting on each other. OWWWW!

His style in this book’s art is craggier than, say, Mr. Capullo’s, and it works well. Things are somewhat out of joint in the story, and Jock shows that he can handle big explosions as well as smaller, more intimate fights. Well done!

The one thing I still want to understand is how The Batman Who Laughs can actually see anything! His head is surrounded by spiked metal that covers his eyes! Creepy, to be sure, but how can he possibly know what’s going on around him? Inquiring minds want to know! And that Grim Knight—what’s up with him?

It’s such a pleasure to read Snyder writing Batman again! Don’t get me wrong—I’m greatly enjoying Tom King’s run, but Snyder’s Dark Knight stories just set the bar so very high! We need more Batman stories from him, even if that means a big bunch of miniseries’.

The Batman Who Laughs #2