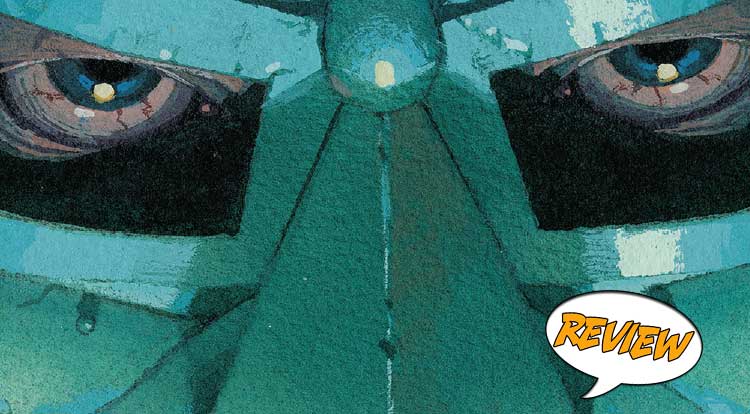 Previously in Fantastic Four:  The long-awaited wedding of Ben Grimm and Alicia Master came to an abrupt end when a massive hologram of Doctor Doom appeared in the sky, announcing that Galactus had made landfall in Latveria, but that he alone would deal with the World-Eater.  Reed stopped time long enough for Ben and Alicia to tie the know, then the team jetted off to Latveria to investigate!

As Galactus attacks Latveria, we once again see the adoring eyes of Doom’s people as they marvel at his defense of their lands.  An old lady tells her son to look in the sky and see the angel that their master has summoned to protect them, as we see a cosmic-powered woman attacks the Big G with her full power.  A volley of exploding servodroids follows, and the World-Eater is actually knocked back.  A little bit, anyway.  Doom suddenly receives a warning that the Laverian border is being crossed, and sends the “angel” to deal with the quartet of invaders while he goes mano-a-giant-purple-mano with Galactus.  She confronts the FF at full power, declaring herself to be Victorious, the Herald of Doom!  Mister Fantastic immediately realizes that she’s been imbued with Power Cosmic and offers to help her, trying to explain that Doom’s process for giving her powers will be fatal for her.  Victorious refuses and battles on, while Doom destroys Galactus’ regulators, the devices that help stave off his immense hunger.  The Devourer nearly falls, consumed by his hunger, unable to formulate a coherent thought, but stumbling away into the mountains, mumbling about his needs.  He encounters Victorious and the Four, and immediately begins consuming HER energy, leading Doom to declare that his perfect plot has been successful!

There’s a lot to like in Dan Slott’s take on Victor Von Doom.  Taken at its face value, we see a man who is so ruthless that he will sacrifice even his closest allies to achieve his ends, but I suspect there’s more to Doom’s plot than meets the eye.  The use of Galactus feels a little retro for me, especially given his recent appearances in ‘Silver Surfer’ and ‘The Ultimates’, but I understand the need for a traditional purple antler god for a more traditional Fantastic Four run.  There isn’t a lot of focus on the Fantastic Four in this issue, but the bits of dialogue and character that we get all ring true: Ben is crabby about his wedding being interrupted, ready to punch anything that needs punchin’.  Johnny is so happy that Victorious called his hair “perfect” that he doesn’t even mind getting blasted out of the sky.  Reed immediately understands Victorious’ predicament and offers to help her.  As for Sue, she kind of blends into the background, which is a bummer.  The art in this issue is not really to my tastes, but Kuder has some great layouts and the battle sequences with blasts flying in all directions look good.  I don’t care for his take on Doom (especially the faceplate) and his facial expressions are very cartoony, especially in a sequence where Alicia and Aunt Petunia take care of Franklin and Valeria.

There’s a lot to like about this issue, especially the use of Doctor Doom and Galactus, and there’s clearly a mystery behind Victorious that we haven’t been let on to yet, but I’m not sure about the art yet.  There’s a point where the team talks about their awesome new redesigned uniforms, but we never get a really good look at them, which feels like a missed opportunity.  Fantastic Four #6 goes traditional after years of no FF, though, so even my issues with the art don’t sink the issue, leaving us with a better than average 3 out of 5 stars overall.  But the real question is: wasn’t Aunt Petunia younger than that?

I like the story, especially Doom vs. Galactus, but the art is a little bit cartoonier than I like. The team sounds like themselves though, even with Reed's ridiculous beard.