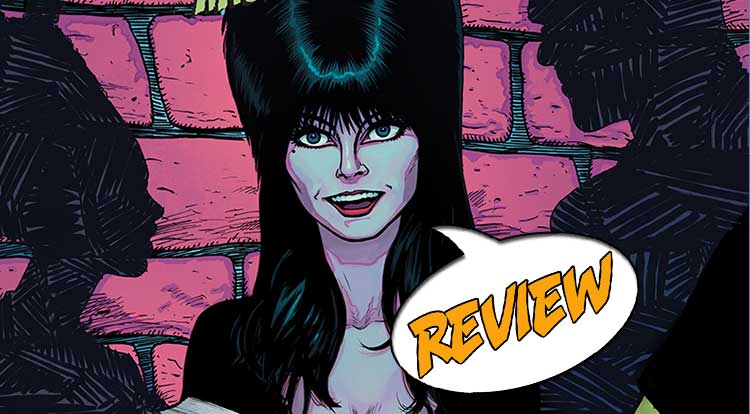 Elvira is back in Hollywood! But wait – it’s 1935! Looks like her time-hopping adventure isn’t quite done yet! ELVIRA MISTRESS OF THE DARK #4

Previously in Elvira Mistress of the Dark: Elvira is falling through time, by way of a magic coffin. Her path takes her to meetings with classic horror greats, such as Bram Stoker. But, as if things weren’t exciting enough, she is also being chased by Vlad the Impaler! After the first couple of issues, she figures out she and Vlad are being played, and she burns the coffin. This brings out Doctor Faust who doesn’t need any stinking coffin to send Elvira through time. One snap of his fingers and she’s back in Hollywood…but in 1935.

ON FAMILIAR GROUND AND RAMPING IT UP WITH THE JOKES

Elvira Mistress of the Dark #4 may not be a profound book, but it is a lot of fun, and the writing really pulls through. Elvira has ended up on the set of the Bride of Frankenstein, right in the middle of a scene. But the director’s name is Mr. Baleen (as opposed to James Whale). Elvira claims to have been sent there to model a potential costume. But no, it would plainly be too much for the League of Decency. There’s an aside with the makeup and hair team, who adore Elvira’s look. Then we find out that the stars of this movie are Byron Orlock and Emma Laughton. And this feeds into the joke where Elvira mentions that they’ve run out of people in the public domain – it’s a fantastic slow roll to the joke.

This is about the time Doctor Faust shows up and Elvira tries to talk him out of messing up everyone’s lives. He tries to tempt her with eternal life as a vampire queen and I love her response – that she’s thrilled to be exactly who she is, “an all-American woman in an eye-popping dress, who loves spooky stuff and stupid puns.” That seems so true to her character.

Vlad, of course, also shows up and goes after Emma. Byron fights him off; Vlad punches Byron out. Elvira tries to lure Vlad away, but he will have none of it. Every time he chases her, she leads him into a trap. A few more jokes and she makes a hasty exit. And the chase is on! (Elvira bemoans the running – since she’s not wearing her Fitbit.) They go through a few soundstages – a Western; a mystery movie very much like The Thin Man; a Fred Astaire-like musical – until they finally reach a pirate movie (very much like Errol Flynn). Some sword fighting, and two movie cops (Chick and Wilbur – a nod to Abbott and Costello) show up. This issue is long on the clever jokes and references.

Vlad falls into some electrical cables and that’s the end of him. Elvira wants to go back home, and refuses to travel with Faust. He snaps his fingers to send her away – but it doesn’t work this time. Is Elvira trapped in 1935? And then the devil himself shows up, and takes them both away!

ROMPING THROUGH THE STUDIO

What’s really fun about the art in Elvira Mistress of the Dark #4 is the care they’ve taken to make things recognizable. They may not have full likeness rights for everyone, and not all the stars look like themselves, but again they aren’t using their names either. And in the great scheme of things, it doesn’t matter because we recognize the movie and character types being portrayed. And I think I picked up on a fair number of the references, although there certainly could be more.

Everything is larger than life in Hollywood, and facial expressions are no exception. We’re frankly getting melodramatic here as well, and it’s kind of fun when everyone is at cross-purposes. When Vlad shows up, he is enraged, Elvira is concerned, and the director is fascinated. I also like the takes on the various movie sets, and that they include cameras and lights, so we keep that feeling that this is Hollywood.

BOTTOM LINE: THE PLOT GETS TWISTIER