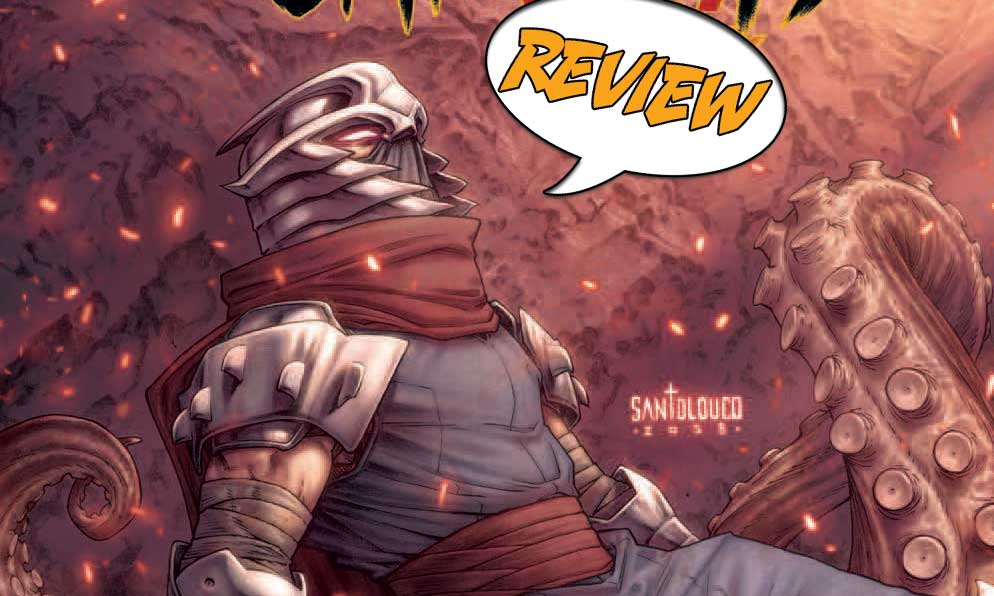 Death is not the end and the man known as Shredder has discovered that. His spirit finally gaining some peace, he has been thrust back into some sort of existence by the machinations of his immortal love, Kitsune. Will the spirit of Oruku Saki even know true peace, or will he be one of the damned. Teenage Mutant Ninja Turtles: Shredder In Hell, is on stores shelves now. Previously in TEENAGE MUTANT NINJA TURTLES: After Oroku Saki, the leader of the Foot Clan known as Shredder was killed by his one-time friend and clanmate Hamato Yoshi, also known as Splinter, his soul finally was able to find some peace. However, Kitsune, the immortal who loved Oroku, has plans. Those plans involve Saki’s soul and the resurrection of her father, the Dragon God. Even death cannot grant Shredder the rest he deserves.

DEATH IS BUT A STOP ON THE WAY TO EXISTENCE

In an unknown location, in a shrine encircled by clusters of candles, the immortal woman known as Kitsune sits in front of the decapitated body of Shredder, the Dragon Warrrior. She has begun a ritual to call forth her father, the Dragon God, and must use the spirit of Oroku Saki to complete the summoning. Through the use of a blood-soaked brush and ancient calligraphy, she invokes the ritual, setting events into motion. We flashback to the last moments of Oroku Saki as he suffers defeat at the hand of his enemies and a onetime friend, Hamoto Yoshi. As Yoshi prepares to send his friend into the afterlife, Oroku declares that they will be reunited in the forest they played in as children. With final words to his beloved Kitsune, the word stroke falls. It is a tale told in blood.

With a start, Oroku finds himself in the forest he and Hamoto played in as youths, but he is not alone. A voice in the wind chides him, berates him for choosing what it sees as a weak path. It is the voice of The Dragon, and the apparition that assails him, which looks so familiar, is Takeshi Tatsuo, the founder of the Foot Clan. Confusion set in as Oroku realizes he himself is the reincarnation of the Tatsuo, but in death, they share the same realm. Tatsuo berates him for growing soft, for allowing the words of Saki to drown out the voice, the power of The Dragon God’s spirit. Oroku realizes this is the power Splinter spoke of, the power that may have chosen him, but not he it. The spirit of Tatsuo grapples with Oroku, finally throwing him into a pool where he is assailed by monstrous creatures. He begins to drown, if a spirit can drown, before being pulled to the surface by a familiar form. The fur-clad persona of his old friend, Yoshi, has saved him. He has arrived to help his friend, but if he is there, that means he has also crossed over. If he has crossed over, Oroku Saki knows they have a battle ahead of them.

WHAT NIGHTMARES MAY COME

In issue #50 of IDW’s Teenage Mutant Ninja Turtles series, the complicated villain known as Shredder met his final fate at the hands of his friend, Hamoto Yoshi. As in many comics, death is not the end, even when you have a body. Writer and series artist Mateus Santolouco (2 Guns, Dial H) reaches into his bag of ideas and brings the soul of Shredder back to continue what seems to be a long fermenting storyline revolving around the final fate of Oroku. It is a dense tale, one that weaves an inner set of rules that revolves around the nature of life and death. It is highly entertaining, and while we see multiple enemies from his past it is the final cliffhanger which makes you set up and truly take notice.

Santolouco also provides the art for this series, and assists colorist Marcelo Costa (Zombie Tramp, Vampblade) in that duty. Santolouco’s art is detailed, and there is a beauty to it which draws you in. The scenes where Oroku sees his younger self in the forest are almost magical, as are those where he Splinter lays out the situation and Oroku makes his choice are achingly beautiful and tragic. The colors add much to the story, and there are subtle effects that bring depth and clarity to the work. For a comic that touts as putting its main character in Hell, it is absolutely gorgeous.

BOTTOM LINE: AN ENTERTAINING STUDY OF THE CHARACTER

How many characters star in comics where the title includes, “…In Hell?” Characters as diverse as Godzilla and Cerebus have touted such titles and now it seems that Shredder will count himself among those. An “…In Hell” title usually means one of two things, a totally boffo, off-the-wall series done to shock, or a serious characters study. It seems that Santolouco has gone the route of character study, and it has started out wonderfully.