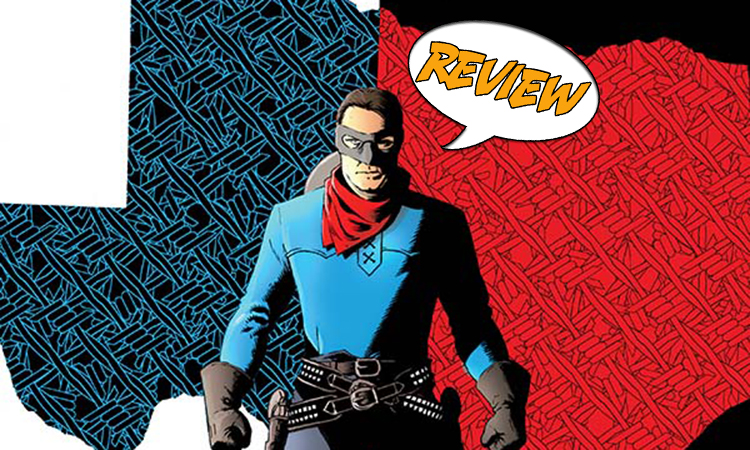 The war for the Texas plains continues, with the Lone Ranger and Tonto gaining ground in their latest fight against the ranchers. When the ranchers and businessmen call in someone to handle their problems, could the cure be worse than the disease? The Lone Ranger #4 is on store shelves now from Dynamite Entertainment. Previously in THE LONE RANGER: The masked man known as the Lone Ranger and his friend Tonto continue their fight against the land barons deep in Texas. Their actions have proven extremely effective and it looks like they are making headway. Desperate times call for desperate measures, and the criminals call in a force that they may be able to handle their collective problems.

I’LL BE YOUR HUCKLEBERRY.

The members of the cabal take time to assess their current situation. Their persons wounded, their cattle rebranded, and their affairs are in complete disarray. Now, at the funeral of Donald Metz, they stand on the cusp of an action that will most definably change the game in their war against the Ranger. At the Double Goat, Mr. Pringle has taken a desperate step. While an army of mercenaries was unable to solve the problem of the Ranger and Tonto, he has decided to bring in a single man. Odd, you say? That single man has a reputation for getting the job done, and for being paid a lot to do it, whatever it is. You see, the man they have called in is a survivor of the Camp Douglas prison, a bounty hunter, fixer and a cannibal. Yes, that top hat wearing, dandy of a man named Connor is a cannibal, and he is most feared. Once Mr. Pringle assures him visually that he has the money to pay him, he reveals he has already been on the job. He has found one of Pringle’s own servants has betrayed him with their loose tongue and a love of fine whiskey. This leads him to the young freeman who gave Pringle’s enemies access to his home and the Ranger a major piece of ammunition to use against him.

The Ranger now has proof, in the form of a land deed, the ranchers are stealing Federal land. While state officials may be corrupted and working with them, he hopes to convince the United States Marshal assigned to the area to step in and stop it. But Connor the Cannibal is ahead of him, and the Ranger arrives at the Marshalls office to find a dead and partially dismembered Marshal, a bloody warning on his desk. The Ranger has walked into a trap, and the gunmen outside are determined that he will either come out and die, or stay in the office and burn.

But, what about Tonto? Connor has a line on him as well, and he confronts him in a Dos Caballos saloon where he has been working, gaining information and planning their next moves. Over drinks, the two compare histories, but it is not long before the blood begins to flow faster than the whiskey. Has the Ranger and Tonto met their match? Will Pringle and his fellows triumph?

You will need to pick your own copy up to find out.

A HIGH-ACTION WESTERN IN THE FINEST TRADITION

This is the fourth chapter in the story begun by Mark Russell (The Flintstones, Exit Stage LEFT: The Snagglepuss Chronicles) in the first issue of this new series, and it is aging wonderfully. He continues his excellent and smooth scripting here and the story unfolds at an excellent pace. There is some great dialogue and each character has their own voice that expresses their personality wonderfully. In fact, the story itself is excellent. It avoids falling into the troupe of gritty, hard realism of a popular cable television genre but also avoids the campiness of the singing cowboy inept lawman. It straddles these expertly, giving a story that, while it has darker elements, satisfies you on multiple levels. There is some light comedy, action, grit, but even the inclusion of a cannibal is handled in a most interesting way. I am called back to the excellent western comics of the nineteen seventies, and it makes me want to grab a horse and ride.

A large part of this feeling is also attributable to the artist for the series, Bob Q (The Green Hornet ’66 Meets The Spirit, James Bond: Origin). He has a clean and exact style that has a foot set solidly in the comic world, but with a western tilt. There is a very cartoonish but real style to his characters that grabs on to the personalities Russell has given them and enhances them. It is a fun read, even when things look dark.

BOTTOM LINE: PICK IT UP, YOU’RE A DAISY IF YOU DO!