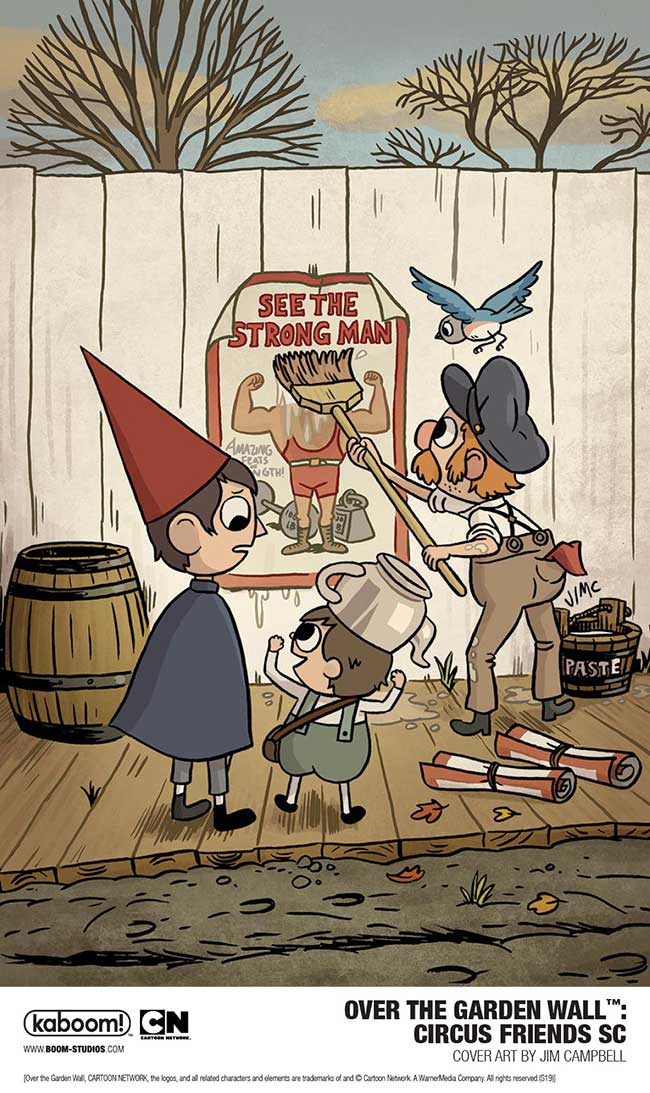 BOOM! Studios is proud to announce OVER THE GARDEN WALL: CIRCUS FRIENDS, a brand new original graphic novel set in the world inspired by the Emmy® Award-winning Cartoon Network animated series, Over The Garden Wall. Writer Jonathan Case (Over the Garden Wall: Distillatoria) and artist John Golden follow Greg, Wirt, and Beatrice deeper into The Unknown on their search for a path home and instead stumble upon a distraught Strongman and Clown who have run away from their circus. But when they follow the two disgraced performers back, Greg and Wirt lose Beatrice to the greedy Ringmaster who’s found his newest act: a talking bird! The boys will have to team up with the reluctant circus acts to save Beatrice and escape the clutches of the biggest show in the Unknown.

“I’m so pleased to be dabbling in the Over the Garden Wall universe again.” said writer, Jonathan Case. “John’s doing a great job bringing our new characters to life and filling every inch of the circus with funny and creepy details.”

“I look forward to introducing readers to a colorful new cast of characters on Wirt and Greg’s latest adventure!” said artist, John Golden.

OVER THE GARDEN WALL: CIRCUS FRIENDS is the latest release from BOOM! Studios’ award-winning KaBOOM! imprint, home to comics for middle grade and younger readers including licensed series such as Adventure Time, Steven Universe, Peanuts, and Garfield, along with original series like Mega Princess by Kelly Thompson and Brianne Drouhard, Bodie Troll by Jay Fosgitt, and The Deep by Tom Taylor and James Brouwer.

“You never know who you’ll run into in The Unknown, but each new encounter has shaped Greg, Wirt, and Beatrice in unexpected ways as they wander ever deeper into the surreal and bewildering forest around them, ” said Matthew Levine, Editor, BOOM! Studios. “Jonathan and John throw our brave young heroes into the thick of it as they overcome their fears and step up to fight to save their friend from a lifetime of misery and servitude.”

Print copies of OVER THE GARDEN WALL: CIRCUS FRIENDS will be available for sale in October 2019 at local comic book shops.