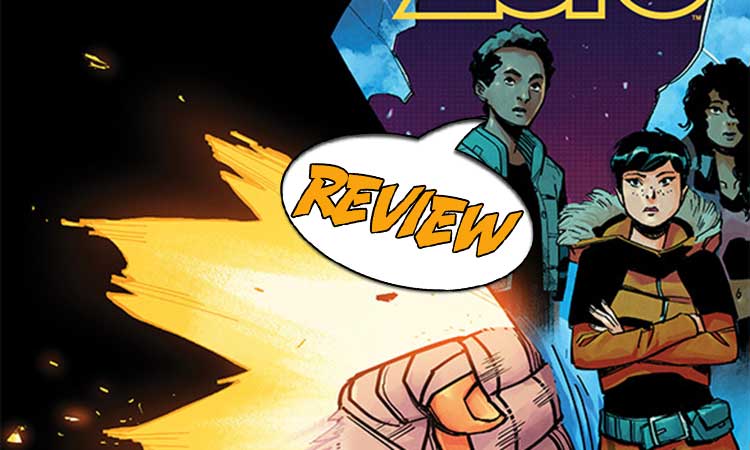 Sam, Alea, and Lyss explore possible ways to get into the Stem. But what is Mitchell’s story? Previously in Outpost Zero: Lyss has a day off with not one, but two recreational loaner credits! She chooses rocket skates and ear players and heads out to thoroughly enjoy her day. In contrast to this, the work on the ice over the dome is being broadcast, and nearly everyone else is watching this. Her day is interrupted when Services Team is called into work, firing up the steam banks to help ease the stress of ice on the dome. She does this – but it’s lonely, creepy work down under the outpost. When she gets back, Sam and Alea ask her to help them gain access to the bunkers and the Stem. She refuses, until Josh (working on the ice) loses his arm, and she remembers her mother telling her to let her fear free her, not hold her back. And she agrees to help.

SMALL COMMUNITIES HAVE THEIR DARK SIDE

As the story unfolds in Outpost Zero #6, it’s finally our chance to get to know Mitchell. He’s doing some serious fight training and it looks like he’s putting his anger into it. Right away this tells us there is more to Mitchell than we’ve seen so far.

Sam and Alea are talking. Even at this moment, Sam is hesitant to let Lyss know anything more. He takes Steven’s disappearance very personally. But Lyss arrives, and they go down into the bunker. There are systems running, but no one knows what all of them are anymore. At this point, Alea tells Lyss point blank that they are doing this for Steven, that he thought they could find answers in the Stem, if they can get there. Lyss wholeheartedly agrees to help, and Alea reassures Sam that she can be trusted. Lyss points out a piece of equipment that used to connect to the Stem, but which has now been sabotaged, and they examine it more.

In the main area of the Outpost, most everyone is still watching the feed from the surface. Someone recognizes Mitchell and that his debut is coming up, his fight debut that is. He tells him people are really looking forward to this. In the next scene, Mitchell is at home, eating with his dad, who is on the farming team. His dad points out that most fighters don’t live past their twentieth birthday, and almost immediately we see Mitchell’s resentment, that he doesn’t want the life his father has had. We also finally get to see his sister, Maddie, who is in her room and has apparently been taking some kind of drugs. That’s how she’s been coping after their mother killed herself. No wonder Mitchell has been kind of prickly and on edge; this is an enormous thing to cope with.

More time passes in the service bunker as the trio explores a bit more, and they do find a gap that leads down into the Stem, but that’s as much progress as they can make now. They climb back out to the surface where Mitchell, out for a nighttime run, comes across them. He is immediately mad at Sam for spending time with his friends. Both Alea and Lyss are, if anything, sympathetic to him, and he turns away from them.

Mitchell goes home and talks with Maddie a little more about their mom, and he begs her to stop taking drugs long enough that she can see his debut fight. We do see the fight – and learn that Mitchell is fourteen, and his opponent is fifteen. We also see two empty seats in the auditorium. Mitchell wins his fight, a bare-knuckle match, but not without taking several hits in the process (an eye swollen shut; a bloody nose).

EVERYONE HAS THEIR OWN STORY

Mitchell has always been pretty intense, but we really see that in Outpost Zero #6. He is younger than I thought by a few years, which makes his story all the more poignant. Yes, he acts like a jerk to his friends, but considering what he’s keeping inside, it is not surprising. And every time we see him, we understand, and now we see this burning out through his eyes. One of the things that make the book so fascinating is how very human everyone is. And seeing his father and his sister, both also dealing with this pain and not talking about it – it’s heartbreaking.

The bunkers have always been surprisingly vacant of people. I like the way they look – efficient and sterile. And now we learn that they may be unknown territory for many of the people of the Outpost. The bunker the young people explore this time doesn’t look frightening on the surface, but I got more of the sense that it is a relative unknown, and that makes it feel foreign, even in its banality.