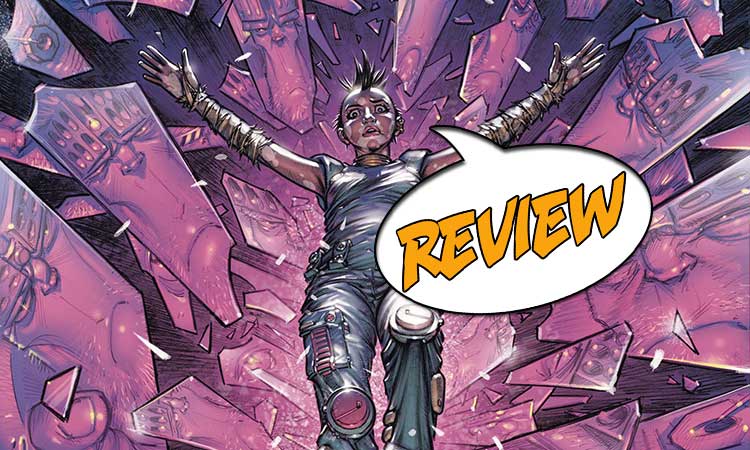 Previously in JUDGE DREDD MEGAZINE: Last issue, we stories such as Judge Dredd in “The Fright Before Christmas”, more of the Dark Judges, the last stand of Metta Lawson, Psi-Judge Lillian Storm and colonist versus aliens, plus a bagged mini-comic. We were also gifted with various articles and interviews. This month, well, read on to find out.

A MAN SO HARD, HIS VEINS BLEED ICE…

This issue of Judge Dredd Megazine contains five separate stories; four of which are continued from previous issues, one a self-contained story, and a pair of articles. As this is an anthology series as well as a serialized magazine, it is always a little difficult to decide how to tackle a review. Do you cover each story, do you pick and choose, or do you give just the facts?

How about a mixture of those?

In the only self-contained story for this issue by Arthur Wyatt (2000 AD. FutureQuake) with art by Jake Lynch (Zarjaz, 2000 AD), we actually start off rather innocently. A man is walking his dog. No one would believe the man is actually a clone of the crime lord Sev Gruber, and was a major ruler of Euro-Cit. He is in hiding, but some deed can never be hidden from. A small, insect-like drone delivers a strange substance to him, and he immediately goes into convulsions, vomiting a green liquid from his mouth. The medics arrive in moments, and one of them, wielding a wicked looking chest saw, immediately goes to work. But is it normal for a medic to remove a heart to save the patient, especially when the patient is not saved? Later, at the Billy Sienkiewicz Block Civics Arts Center, Judge Serota and Judge Dredd are working a similar case where the victim has had his heart removed, in public, with no attempt to hide the crime. The perpetrator is on a mission, but as he finishes his third target, the Judges arrive. After his escape, they go to the next person on the list and find out who the perp is, as well as his possible motives. It’s a blast from the past as Judge Dredd and Judge Serota come up against the Red Prince in, “The Red Prince Diaries.” While this one is contained, we are promised a continuation at some point in the future.

This is just a taste of the action in this issue. We have a future jump in and find out the fate of Badrock and its guardian, Metta Lawson in episode five of Lawless entitled, Ashes to Ashes. Storm Warning, Green and Pleasant Land Part One, takes us to Brit-Cit and Psi Judge Lillian Storm. You would think investigating the murder of three people would be simple when you can talk to the dead, but you would be wrong. In Blunt II, Part Five, Blunt returns to Mega-City Colony Getri-1 only to discover there has been a kidnapping, of the colonist. Finally, the resurrection of the Dark Judges continues in “The Torture Garden, Part Five” as a team of Marines are sent to the Colony World of Dominion, only to find they must face an enemy who believes the greatest crime is life, and we see the final, missing Dark Judge appear.

AND WHEN HE SPEAKS HE NEVER SAYS IT TWICE!

The creators in this magazine, sorry, megazine, are a wonderful collection of talent. While Arthur Wyatt and Jake Lynch deliver a traditional tale of Judge Dredd in “The Red Prince Diaries, Dan Abnett (Aquaman, 2000 AD) and artist Phil Winslade (The Monolith, Goddess) give us a space western with some of the most beautiful black and white line work to grace the page of any title. Storm Warning by Leah Moore (Damsels, Albion) and John Reppion (Albion, Damsels) is a great mystery, and the artwork by Tom Foster Brit-Cit Noir, 2000 AD) calls back to what I believed all British comics must look like as a child, beautiful. Blunt II has a psychedelic, sci-fi, cyberpunk feel, and writer T.C. Eglington (Thought Bubble Anthology, 2000 AD) makes with the story like no one’s business. Boo Cook (Elephantmen, 2000 AD) gives great sequentials, and they almost surpass his amazing cover in awesomeness. For truly disturbing horror, look no further than The Torture Garden where David Hine (Spawn, 2000 AD) writes a most disturbing tale and Nick Percival (Clive Barker’s Hellraiser, 2000 AD) paints scenes which could very well give you nightmares for a month of Sundays.

If all this talent and entertainment was not enough, you also get, in the sealed bag, a separate comic/trade with the first part of Editions Glenat’s four-book series about D-Day. That by itself, with a story by Michael Le Gallie (Naragam, L’ Odyssée de Fei Wong) and artist Davide Fabbri (The HellBlazer, Star Wars) would be worth the price of admission, but it is an extra added value!

BOTTOM LINE: DROKK IT! THIS IS GREAT DYSTOPIAN FUN

No secret, I love my anthologies. Just go and browse my contributor page here on Major Spoilers and you see I review as many as I can. The only reason I don’t review Judge Dredd Megazine every issue is the sheer volume of content. You get stories ranging from traditional Dredd, to space western, cyberpunk/Sci-fi, astral horror and more. I wish I could find an equivalent book here in the United States which came out regularly and packed this kind of variety of story and creators into one monthly volume.