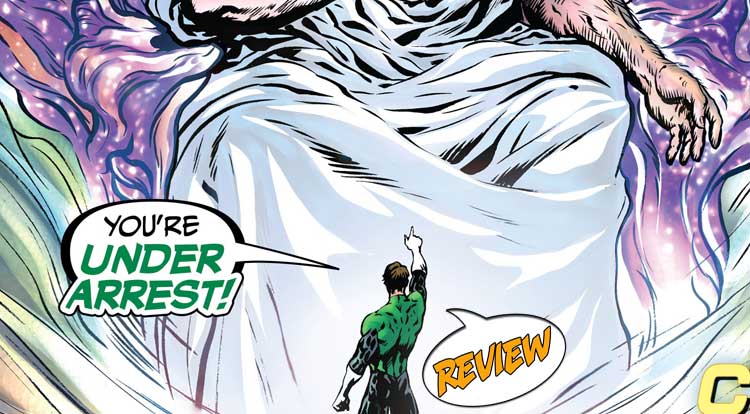 The Earth has been planet-napped!  But the space police of the Green Lantern Corps are on the case…  Your Major Spoilers review of Green Lantern #3 awaits! Previously in Green Lantern: When the Earth goes up for sale on the alien black market, it’s up to the Green Lantern Corps to bust up “The Slave Lords of the Stars”!  With the Justice League frozen by Gamma Gong tech, Earth ends up on the auction block, and Volgar Zo hosts a menagerie of the universe’s deadliest despots and criminals: Steppenwolf, Queen Bee, the Dominators and much, much worse.  Hal Jordan leads a squad of Lanterns into the fray-and someone’s going to pay the ultimate price before this case gets closed.

SLAVE LORDS OF THE STARS

As we open, the bizarre alien Volgar Zo of Dhor (who is for some reason not Kanjar Ro, a character who served the same role in classic JLA stories without being nearly as creepy) prepares to auction off the planet Earth to the highest bidder.  From the hordes of buyers comes someone who eerily resembles the traditional Gee-Oh-Dee, who outbids all comers to take the world for himself.  While Tom Kalmaku tries to find Hal Jordan among the massive storms and climate issues that come from moving the Earth, Green Lanter and a battalion of Lanterns gets ready to swoop in and save not only Earth, but all the other victims.  When Hal arrives, though, he finds The Shepherd has already put Earth in his collection, putting it in orbit around a sun that gives everyone on the planet super-powers,  When Hal tries to warn them that the Shepherd is actually going to eat them in a few thousand years, the planet shrugs its collective shoulders and declares that a problem for future generations.  When Hal finds Volgar Zo, he is already angry, and when he discovers the hordes of irradiated, dying slaves in his hold, he…

…KILLS the creature, declares it self-defense, and orders his Green Lantern squadron to start cleaning up the mess?

There’s a lot about this story that I didn’t like: The “selling out future generations for personal gain” plot feels very blunt and obvious, right down to the point where a government official who resembles the current Vice-President outright says that they can live with future generations dealing with the consequences.  Volgar Zo’s suggestions of how to torture and torment the Earthlings is likewise lacking in the subtlety that I associate with Morrison’s previous work, and of course, there’s that final scene.  I understand the theory that social commentary sometimes needs to be open and obvious, but Green Lantern #3 feels like it’s trying too many things at once and pushing certain buttons a little too hard.  On the art front, Liam Shapr delivers some of the most alien aliens I can remember seeing on the comics page, especially Zo himself.  Even Medphyll, the classic carrot-headed alien looks freaky and disturbing, which I appreciate.  Sharp also delivers on the facial expression front, especially when an enraged Hal impales the slaver with multiple ring projections, turning to snarl at the readers/his fellow Lanterns.  There are some moments where it was difficult to follow the changing scenes from panel to panel in the middle of the book, but that may be as much on the writing/plotting as on Sharp’s art.

As strong as the art is, though, there’s something about this issue that makes Hal Jordan seem remote and out of focus, and I’m still not sure why the ending happened the way it did.  Is he being effected by the influence that is mentioned as affecting human brains?  Is he really going to kill somebody and play the “police officer claiming self defense” card?  I don’t know, and Green Lantern #3 doesn’t provide a lot of insight to help me know, but it does have creepy aliens, some strong art and the threat of the Darkstars to entertain us, even when the story gets obscure or murdery, earning 3 out of 5 stars overall.  The pieces are all here for an excellent story, and they may get there by the end of this arc, but right now I’m still a little puzzled.

It's weird, disturbing and alien as heck, with a final page shocker... I'm just not feeling it as much as I would have liked to.