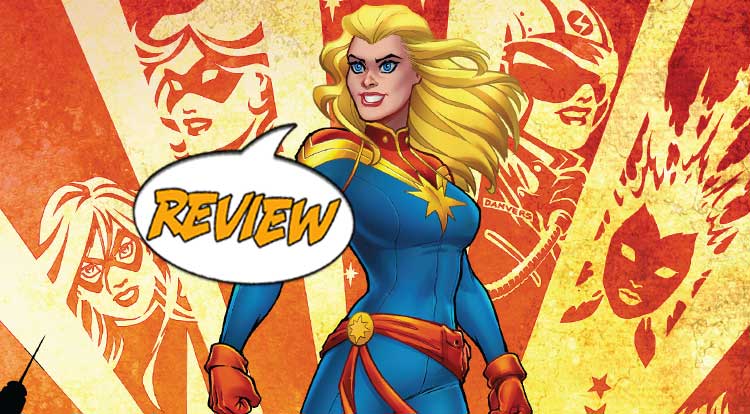 The truth about her mother is out.  Can Carol Danvers pull her life back together again?  Your Major Spoilers review of Captain Marvel #1 awaits! Previously in Captain Marvel: As Captain Marvel, Carol Danvers has spent months in space protecting Earth from alien threats big and small, but now it’s time for Earth’s mightiest hero to come home.  New York City has never looked so good.  But every re-entry comes with the unexpected, and Carol is about to hit a whole lot of unexpected.

We open in mid-battle, as Captain Marvel and Spider-Woman battle a giant squid-creature while rekindling their long-neglected friendship.  The battle is less interesting than their teamwork, ending when Cap has to blast down the creature’s throat to save an innocent from being eaten alive.  The heroes agree to meet for coffee later, as Carol has to go and meet with Tony Stark about returning full-time to The Avengers.  But things have changed for the Marvel Universe, and internal polling number show that people are worried about Carol’s time spent in space as the leader of Alpha Flight Squadron.  He also needs for her to help mentor a young hero who has been having some issues, Hazmat of the former Avengers Academy.  She agrees to an interview, only to have her sorta-kinda ex Jim Rhodes arrive to greet her.  She rekindles her romance, only to get interrupted AGAIN by a scheduled interview with a reporter, which is in turn interrupted by the attack of the Nuclear Man, formerly known as Mahkizmo, enemy of the Fantastic Four.  Once again, Captain Marvel is forced to fly in at full speed to save an innocent, but this time, she ends up on the wrong side of a portal that leads to Nuclear Man’s home.  This is probably bad.

I LOVE THE FRIENDSHIP WITH SPIDER-WOMAN

This is a really well-crafted first issue, taking a lot of information and history and conveying it succinctly as part of a real story.  Carol Danvers’ friendships are reintroduced, her Avengers membership is reinstated and we see her determination in action without ever feeling cramped or rushed.  What’s even better is the return of Hazmat, one of the discarded characters of Avengers Academy/Avengers Arena, in a new role as young protegee of Captain Marvel, though I’m a little worried about the strong overtones of movie Teenage Negasonic Warhead in her dialogue.  The use of Hazmat, Mahkizmo and bits and pieces of Marvel lore  in Captain Marvel #1 (Carol’s interviewer is working for Ms. Magazine, the publication that Carol used to work for in her earliest appearances) are streamlined into a narrative that effectively assembles Carol’s new cast and setting.  The art is quite good as well, especially in the facial expressions (they’re particularly great in the Spider-Woman sequences) and the cleanness of the inked lines.  Captain Marvel’s costume looks good with this art team, and this may be the first time I believe in the Carol/Rhodey romance.

BOTTOM LINE: A STRONG FIRST ISSUE WITH A NOT-SO-GREAT COVER

My first impression of this book was the Captain Marvel face on the cover, which looks wild-eyed and a little threatening to me, but the interior art is much better.  Captain Marvel #1 may be the fourth or fifth number one since Carol took over the role, but it’s a solid first issue story that does a better job than most at creating a new status quo for Carol and does it with really attractive art, earning 4 out of 5 stars overall.  It even obliquely addresses the problem of Carol’s actions during ‘Civil War II’ in a subtle way, which may help to forget how terribly that book treated our good Captain.

Captain Marvel's history and friendships are reintroduced, along with some new additions to her world, in an issue that is really good at the whole "first issue exposition" thing. I'm looking forward to where this goes.