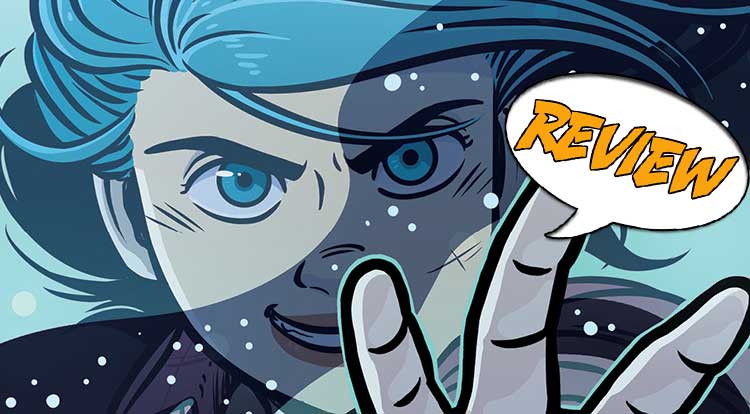 Some teens found the projector and fooled around with it, and now there is a monster running loose around Spectrum! Will Heather and Jane find it before it finds them? Previously in By Night: Gardt is banished to Mount Eucchurus where, wonder of wonders, he finds his old friend Chet is not only still alive, he’s living in a cave inside the Mountain. Barney owes $25,000 to the mob and is trying to use Jane’s footage somehow to raise the money, and fast! He enlists the help of Bo, an old high school friend. Well, an acquaintance. That doesn’t go so well – Bo turns him into Donnie Gabriel, the mobster. Jane and Heather try to track Barney down without much luck, except that one of the mob muscle guys hits on Jane. Meanwhile, the nihilistic teens hanging around Charlesco find the projector, turn it on (wreck it) and a weird bug-like monster comes through!

IT’S DANGEROUS IN THE NORMAL WORLD TOO

I like the way By Night #7 plays with so many different characters, and the story twists around them. This issue opens with Hobo Joe being dragged into the alley by the creature, but not entirely unnoticed. Chip and his brother Andy (the exterminator) get their meal wrapped to go and throw it at the monster, who shuffles off down the alley. Joe is battered but still alive, and still a bit paranoid. Andy calls the police, and the brothers leave. Chip does tell Andy about what’s been happening, and Andy congratulates him for going crazier than their dad.

Heather and Jane are in the local bar for a drink. Barney’s friend Bo is there, catches sight of them, and sidles on over. Heather thinks this is funny – Jane’s really been attracting guys lately. But Bo asks about getting into the other world – he saw the footage. They ask him about Barney, and find out about his debt to Donnie Gabriel, as well as where Donnie is. They do not tell Bo about the projector.

Barney has been roughed up a bit. He offers to pay off his debt by doing some specialized pharmaceutical manufacturing. Not good enough – Gabriel wants his cash and wants it now. He orders his thugs Oscar and Bean to take him out back.

It’s about this time that Heather and Jane show up, realizing that they really didn’t have a plan for what they could possibly do to rescue Barney. Heather has no trouble coming up with plans, but it’s questionable how feasible or practical they are. Then they duck under the staircase as they hear the thugs dragging Barney down. In the background, the creature slinks past them too. Oscar and Bean confer briefly, and decide to break Barney’s legs. Bean goes off to get some heavy pipe while Oscar gets Barney and offers him some alcohol to help deaden the pain. Then there is a weird sound down where Bean went.

On the other side of the building, Chip and Andy arrive, hunting the creature. Andy uses his exterminator skills to figure out where it must have gone. In a delightful exchange, Chip says he doesn’t think Andy will have anything in his van for dealing with something like this, and Andy pulls out a flamethrower.

As Heather looks for something to cause a distraction, Bean’s body comes tumbling down the stairs. Then the creature makes itself known, threatening to feast on everyone it comes across, and then burst forth with more of its kind. Someone calls for Heather and Jane to duck, which they do, and Uncle Andy lets loose with the flamethrower. Chip asks if they’re all right, and the monster is resentful that no one asked it the same question. Jane is fascinated by its resilience, but just before it grabs her, it gets hit by a car. Oscar has run it down and asks if Jane will maybe think of looking him up sometime. He also lets Barney go without breaking his legs.

Everyone drives off, and the Sherriff arrives, as well as Joan (from By Night #3, who had come to retrieve files from Charlesco). There is slime all over.

Barney is checked out at the hospital – nothing worse than contusions and abrasions. He gives Jane the USB, which is badly damaged. He also tells them his story. His mother got sick, and her medical bills wiped her out. He came up with a poker system, which didn’t exactly work, and became addicted to playing, and things went from bad to worse. In another room, the Sherriff questions Hobo Joe, who insists that he was attacked by a mountain lion. Chip, Andy, and Heather check out the projector and find it damaged. Chip is all set to move it out to repair it – once piece at a time. Andy chuckles that he hopes the monster didn’t lay any eggs. And guess what we see in the last panel?

As befitting its title, By Night #7 takes place mostly at night. This gives a lot of room for playing with shadows and alleys, not to mention various abandoned buildings near the Charlesco site. I like that characters from early on, like Hobo Joe, are coming back into play. And I love the team of Chip and Andy, especially since Andy, in his bristly beard, seems to think he has all sorts of backwoodsy type knowledge about bugs. The humor in this book is clever and amusing.

In the best horror tradition, we see the monster in the distance, in part, or by shadow until it’s time for the big reveal, and it is a weird one, with great big glowing eyes in what looks like its upper chest, and a huge mouth placed above that. There are a lot of close up reactions this time around, and the monster is no exception. For fairly straightforward line work, the eyes we see communicate emotions very well to us.

This is a pretty crazy issue with the action ranging from tense and dramatic to frankly bordering on the slapstick, which I think is a good balance to have in an all-ages book.