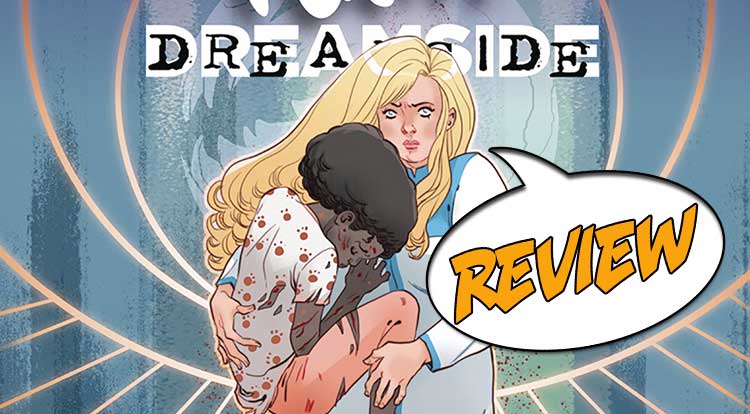 Previously in Faith: Dreamside: Faith’s friend, the young hero Monica Jim (Animalia), is haunted at night by demons. They enlist the help of Dr. Mirage, and after Monica is spirited away – literally – Dr. Mirage and Faith enter the Deadside. While Monica is imprisoned in the dark, Faith’s journey is much more trippy, with giggling flowers, a transforming dragon, and a little grinning cherub who seems to be a spirit guide. They find their way to a cave, where the spirit guide reveals itself to be an enormous winged snake spirit!

Faith: Dreamside #4 opens with some explanation. The monster, named Belu, originated with early humans, with a dream that would be unfulfilled. It came to exist in the Deadside, and as time passed, it created the land around it. But after all this time, it is getting bored, and in the best tradition of monsters everywhere, it yearns for something new to conquer. And it thinks it can find someplace, working through Animalia.

Dr. Mirage hears this, and asks Hwen for his opinion. But the Hwen that steps out of the shadows is a nightmare version of her husband, and she realizes that the companions they picked up last issue are in cahoots with Belu. At that moment, Faith is grabbed from behind by her own double and finds out that her powers do not work.

Dr. Mirage challenges Hwen, and realizes that he is part of her own dreams or nightmares. She relays this information to Faith, who then realizes that her oldest dream was that of becoming a superhero, the dream she had to give up when she was arrested. She apologizes to her counterpart self for giving up on that dream so easily. Maybe other people no longer believe in her, but she can still believe in herself. This is a powerful message, and it affects the other Faith.

Dr. Mirage kills her own nightmare. In a fit of rage, Belu decides to consume Monica immediately. However, he seems to have lost his power over her. She no longer fears him, says Dr. Mirage. He is fed by fear and loss, but the three of them are no longer giving him anything to feed on. Faith, Dr. Mirage, and Animalia all have access to their powers, and together they fight Belu. In an amazing touch, Belu is not killed, but he is reduced in size to a tiny demon snake, who will have to start over again, if anyone dreams of him.

The resolution is satisfying. In the real world, Hwen is his normal ghostly self, and Dr. Mirage is more at peace. Faith has rescued Monica, but in doing so, Monica has saved her as well. We learn about characters by the decisions they make, and Faith decides to take up the mantle of hero and clear her name.

TRIUMPH OUT OF DARKNESS

I do like the look of Faith: Dreamside #4. In this final chapter, it really focuses on expression, and quite a wide range of it at that, considering we have Belu’s minions. The horror is not overdone here, but the wide, toothy grins and wildly staring eyes immediately tell us that these guys are creepy. There are also some lovely panels when Monica goes through her deepest despair. She’s still imprisoned, and the deep blue color accentuates that despair well.

This is all about the characters, so we don’t see much of the world they’re in, except for pieces. At the beginning of Belu’s story, we do see a rough and rugged land in prehistoric times. Most of the rest of the settings are indications of where things are.

Belu, as a four-eyed, multi-winged, giant serpent is an interesting foe who is toothy and terrifying. The final battle with him may be brief, but not only is it the triumph of heroes over monster, but it is quite literally light over darkness. The light effects are lovely. And I just adore the ending when Belu goes back to being a teeny little four-eyed snake. He is absolutely cute (if somewhat cranky).