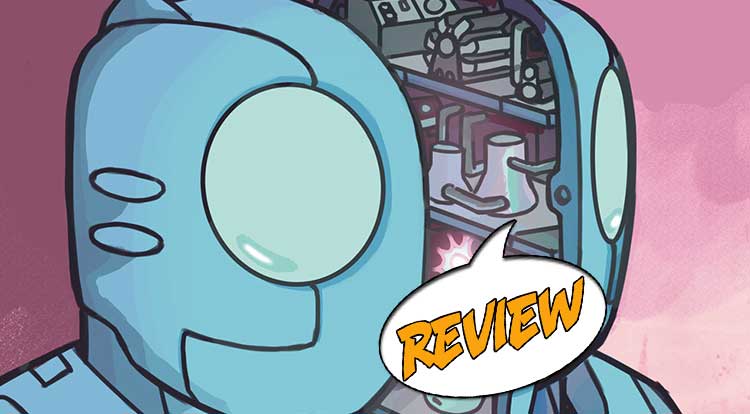 It’s a new start at Tesladyne! Bernard has a volcano to explore; Tesladyne has three brand new interns to break in, and Robo is teaching Alan stuff. What could possibly go wrong? Previously in Atomic Robo: Tesladyne Institute is settling into its new location, on an abandoned lot of the White Sands Test Range. They set up shop, but it is not without some squabbles with their neighbors, Elon Musk and Richard Branson. Which they resolve, at least for now. Meanwhile, there are robot problems leading them back to Hashima Island where they have a run in with Helsingard who tries to take over the world. Again. All in a day’s work for Tesladyne!

Atomic Robo: Dawn of a New Era #1 is just that – a beginning point. Like many beginnings, it starts out quietly enough. Robo is with Alan, giving him things to study. The most recent assignment was apparently reading P. G. Wodehouse, which is awesome. (Wodehouse is a favorite of mine, not only well known for Jeeves and Wooster, but his Blandings Castle novels are also delightful.) Now, for a historical figure, Alan is going to study Sir Isaac Newton. Then Robo touches base with Foley, who has a bit more responsibility now. Saying “What could go wrong?” of course is a cue for something to spark and set itself on fire.

We also meet the three interns, Olivia Mendoza, Margot Rajavi, and Ben O’Maley. They are brand new and don’t know what they’re doing yet. More on them in a bit. As Robo continues to make his rounds, he drops in on Bernard, who is setting off to explore a nearby volcano, and he’s thrilled about it. Robo also drops off their latest exoplanet explorer, Dahlia, so he can also test it. (But also so that Dahlia can keep an eye on Bernard and perhaps keep him from getting into trouble. Again.)

Robo heads back to Tesladyne and has a fascinating discussion with Alan, regarding Sir Isaac Newton, and specifically his more magical writings. This is one of the things I whole-heartedly love about Atomic Robo. They find some interesting historical people and facts, use them in the story, and talk about them. This may well be setting up part of the story arc, but it is also something that I was not aware of, and I adore learning things when I read. There is also a fabulous thought about reading history when Alan questions how to know whether it is true or not. Robo advises him to ask himself who benefits from telling this version. You know, that’s good advice right there.

Overnight we check in with the interns again – tomorrow is their official first day, and they are excited. They can’t sleep. They also can’t wait to start poking around. Carefully. So they don’t get caught. I think these young folks will fit right in here.

Dr. Abasi and Dr. Lang are setting out on vacation. As Robo is seeing them off, Foley comes running up with an emergency. Robo tries to head her off, and she immediately revises it to a “rhetorical emergency” (I love that concept) so Lang can drive them off. Foley’s concern? Bernard Fisher has not checked in. Well, he is underground and this is not completely unexpected. Robo and Foley awkwardly give an orientation lecture to the new interns. Meanwhile, Bernard dictates his reports of exploration.  It’s only two days in. He’s not sounding crazy yet. Not in the least. And he certainly hasn’t been seeing things.

Robo and Alan have another discussion. Alan has been learning human history because that is the history that ultimately led to Robo and to Alan. Robo makes another awesome point – the two of them are not human, but they are people. Human history is their history. If this is so, Alan wonders why he is kept apart from everyone, and it turns out Robo has been working on a body for him.

If you’ve ever read Robo before, you already have an idea what the art is like in Atomic Robo: Dawn of a New Era #1. The lines are clean, often angular, and certainly expressive. Robo has a comfortable, casual look, and I love the little drones that help out in his lab. We have visual gags. In the “What could go wrong?” scene, Foley tries to cover up the sparking with her enormous hat, which promptly catches fire. Her expressions and Robo’s deadpan are delightful. I love that the interns are two women and a man, and one of the women is black. Action science is for everyone, at least it feels that way. And there are little touches around each of them that start giving us a feel for their personalities.

Bernard looks so happy to be exploring his volcano, and Dahlia has a nice amount of personality too. He is only in there for a couple days so far, and we can see that he’s totally not going crazy yet. Well, the cave is getting to him, just a bit. It’s big, you know.