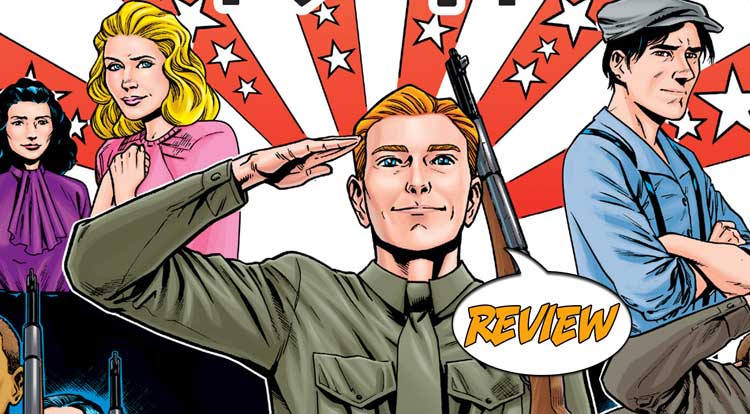 Archie Andrew and Reggie Mantle are headed for combat in the African theatre.  What will they find there?  Your Major Spoilers review of Archie 1941 #4 awaits! Previously in Archie: 1941:  Archie is headed into action while the world watches and waits.  Meanwhile, times are tough at home in Riverdale, while shortages are leading to impending rations, tensions are mounting.  However, despite an uncertain future, unexpected relationships begin to form.

It’s November of 1942, and Archie’s battalion is about to land in Algeria to take on Vichy French forces there.  They’ve been told to expect a huge defensive wave, but instead, they find…  a single soldier, carrying an official surrender.  Reggie is thrilled at their first “big win” but Archie isn’t sure that their luck will hold out.  Back in Riverdale, old relationships get entirely new dimensions: Veronica and Betty finally come to terms with one another as people, even as adults, with Ronnie realizing that she’s not as far above it all as she has been raised to believe; Jughead returns to the Chock’lit Shoppe to have an unexpected talk with Pops while Fred Andrews and HIram Lodge nearly come to blows over Lodge’s unabashed war profiteering.  (The story that Pops tells about what happened to his own son is both tragic and revealing when it comes to his devotion to all “his kids” who hang out in his diner.)  As the issue comes to a close, Archie pours his heart out to a young French girl (who can’t understand a word he’s saying) before they move into the desert.  As the issue ends, the young soldiers are ambushed, with Reggie shoving Archie out of the way of a massive fusillade before fading to black.

After last issue delved into race relations and the nature of growing up, Archie 1941 #4 feels a little bit… anticlimactic?  It’s not that it’s less skilled or less interesting than number three was, it’s just not the revelation that we had last time around.  That said, there are a few really wonderful moments to be had here, in the Pops/Jughead interaction, in the discovery of true friendship between Miss Lodge and Miss Cooper and especially in the sudden realization that Reggie is not only a possible hero but a possible casualty.  Krause’s art once again manages to keep everyone in Riverdale recognizable while drawing in a much more realistic style, and the military combat sequences are excellent.  If you’re not sure why there would ever need to be a comic dealing with war and loss and coming of age in the Archie ouvre, I don’t think this issue will convince you in itself.  But it’s nonetheless a remarkable read.

BOTTOM LINE: A GOOD READ, BUT NOT AS STRONG AS LAST ISH

With some impressive art and really great drama on every page, this book only suffers in comparison to itself, meaning that Archie 1941 #4 looks good, reads well and has a log going for it, earning 4 out of 5 stars overall.  The experimentation at Archie in recent years has proven that these characters are truly elastic enough to fit any story, genre or setting, and I’m very interested in seeing how this Archie take on ‘A Separate Peace’ will end.  I never thought I’d say this in any story, but…  I truly hope Reggie is okay.

The interpersonal drama reaches a breaking point for four different relationships, a familiar face may be gone for good and Archie finally deals with some of his guilt... All in all, a good read.