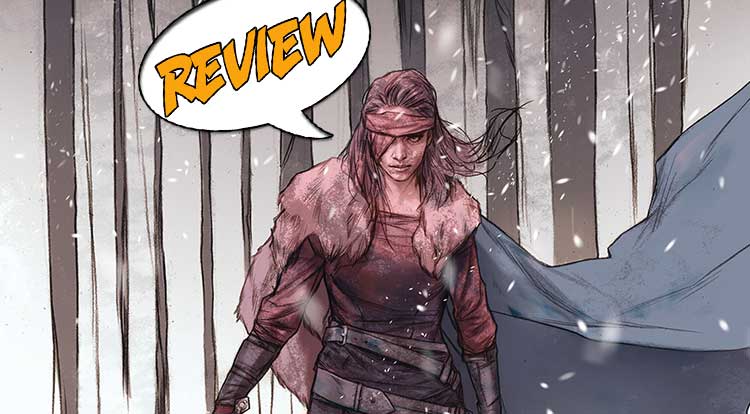 Sword Daughter #5 looks back at Elsbeth’s formative lessons at the women run mountain refuge.  Meanwhile, we flash forward to the present day tensions between father and daughter and wonder at the costs of revenge. Previously in Sword Daughter: After a war band called the 40 Swords raided their village and killed everyone, survivor Elsbeth looked after her father, Dag, who fell into a decade-long sleep.  After awakening, Dag and his daughter fled to the mountains, where Elsbeth began learning to wield a sword so that one day, she could take revenge on the 40 Swords.  Sword Daughter #5 looks back to those days while dealing with the present tensions of father and sword-daughter…

Sword Daughter #5 flashes between the past and the present as Elsbeth’s early lessons at a mountain retreat tended by female warriors is examined.  In other parts, the story goes to the present in several ominous scenes, where Elsbeth visits her father, who has secluded himself.

Stories of revenge are fun, if you like that sort of thing.  The inciting incident, in this case, the slaughter of their village and the death of Elsbeth’s mother, at the hands of the 40 Swords, is a striking way to start the series.  Survival against the odds, coupled with a ruthless urge to avenge your loved ones, is a strong trope in fiction, be it written or visual.  Indeed, the Norse sagas are replete with tales of revenge for any number of slights.  The bleak worldview of the Vikings and their gods, with tales of Ragnarok in the air, is perfect fodder for a seemingly impossible mission of revenge.

Sword Daughter #5, though, isn’t as good as it could be.  Mick Chater’s art is a pleasure and coupled with Villarubia’s bleak tones, brings the harsh wilderness of the first millennium northern Europe to the reader.  This art is the strongest component to this issue and is actually the strongest ‘character’ to be seen.

It’s the writing and the storyline that let the side down a little.  Again, the familiarity of the revenge trope does work against the issue.  The sections in the past are the most familiar, especially if you’ve seen enough Karate Kid films, though with the aim to avenge a murdered family member rather than dealing with schoolyard bullies.  CJ Cherryh’s The Paladin touches on similar ideas, with a similar female protagonist, though the setting is faux Japan rather than Viking Europe.  We have a scene of egg catching to assist with correctly holding a sword as one example, plus some fine Yodaesque commentary to boot.  It is this familiarity that makes this part of the story a bit dull, to be honest.  It’s a case of been there, done that.  Wood’s writing is good, without being great.  It may be, though, that this is simply a function of relying on flashbacks, and that future issues, dealing with present-day problems, will be much more striking.

Young Elsbeth isn’t a particularly interesting character, with much of the tension and drama coming between the interactions of the head of the retreat and her father, Dag.  Other than padding out the number of issues in this arc, I do wonder why Brian Woods thought they were necessary.  The real drama of the issue comes from the scenes in the present day, where Elsbeth fords rivers and slogs through the snow to reach her father, who appears to be secluded in some sort of remote prison complex.  The storytelling and the art come together in these brief moments to create an ominous atmosphere.  Villarubia’s muted tones coupled with Chater’s art convey much more feeling and characterization in these few panels than the rest of the issue combined.

SDaughterugher #5 is very much a placeholder issue that relies too heavily on the flashback scenes to make up the bulk of the narrative.  So heavily, that the story bogs down, to the detriment of the series to date.  While flashback storylines can be compelling, this one isn’t – with the youthful Elsbeth not particularly interesting, it makes for dull reading.  The only compelling scenes are the present day ones, where the brief interactions between father and grown daughter point to a more difficult relationship that can only cause more tensions to play out.  If there is enough in Sword Daughter #5 for the reader to come back to future issues, it is those tensions at play that will reward the dedicated reader.

If there is enough in Sword Daughter #5 for the reader to come back to future issues, it is those tensions at play that will reward the dedicated reader.