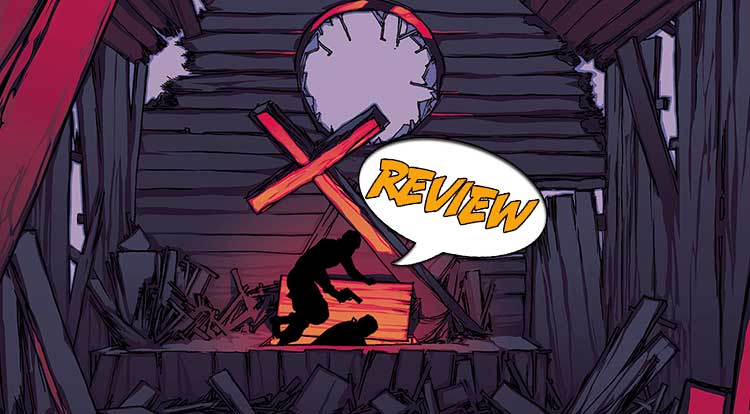 On the run and with the Russian noose tightening around them, Hannah Vance leads the remnants of her team further into the unknown in The Whispering Dark #3! Previously in The Whispering Dark: When helicopter pilot Hannah Vance embarked on a rescue mission, little did she know the disaster that would befall her and the men she was sent to save.  On the run in deepest, desolate Russia, Hannah faces a myriad of command decisions that all involve bad options and worse outcomes.  And lurking beneath a massacred village’s empty church lies perhaps the worst of all worlds…

The Big One has dropped and the war with Russia has turned nuclear.  Deep behind enemy lines, low on ammunition, men, and morale, Chief Warrant Officer Hannah Vance struggles with the command position thrust onto her by bad luck.  In the previous issue, she and her team massacred a Russian family, taking the sole survivor, the daughter, hostage, as they sought to escape the Russian kill teams sent to finish them.  And if you think that was bad, issue three of this compelling series pushes Hannah to the brink…

In The Whispering Dark #3, Hannah is now coming to terms with the limited choices she has to lead her team to safety.  Exhausted, she fights to remain awake as she stands guard.  Visions of a diabolical creature, perhaps real, perhaps manifestations of her own guilt, which has appeared in earlier issues, now fully manifests itself.  It leads her to a dark version of the church where her father preaches.  Something ominous and twisted stands in the doorway, and it is only the sound of a rifle being fired that allows Hannah to escape the vision.

The rifle fire brings Hannah around, and she finds her team now one man short.  In quick order, misreading the situation, Hannah shoots the hostage dead, then leads the team to a deserted village littered with bloody trails that all lead to the church.  Inside, the naked corpses of villagers fill the pews.  And then the arrival of the Russians chasing them compound matters further.

Writer Christofer Emgard tightens the screws in The Whispering Dark #3 until you can feel your breath catch in your throat.  This issue is a master class in ratcheting up the tension, while leaving the audience on tenterhooks as to what is exactly going on.  Is Hannah victim to her exhaustion, preyed upon by her guilt at the deaths on her watch?  Or does something darker, more supernatural dog her team as they flee across the barren, snow-clad landscape, leading them down and down into a far worse fate – to the peril of their souls? Whichever it is, the suffocating atmosphere of this issue is the striking element and with preacher’s daughter Hannah Vance in the vanguard, we see the moral dilemma she faces at play to full effect.

Tomas Aira’s artwork is used to good effect here.  Hannah’s vision of being led by a demonic figure to a nightmarish version of her father’s church is a prime example of Aira’s work.  Good use of angles and shadow, with the coloring turned down to match the gloomy setting, with the final imposing image of a church clad in red, all work to heighten the atmosphere of dread and looming disaster.  Similarly, the emptiness of the village, with the ominously bloody trails through the snow pointing towards disaster.

The Whispering Dark #3 is a great piece of storytelling.  Emgard ramps up the tension, while keeping the audience off balance as to the cause of their unease.  Hannah Vance is a compelling character, and if the other members of the cast suffer the lack of attention, it is more than compensated for watching her moral decay as exhaustion forces more and more mistakes on her.  The artwork is strong, the sheer ordinariness of the images – soldiers in the field, a forest in winter, and an empty village – help underscore the weirdness and tension the characters are experiencing.  However, Emgard has painted himself somewhat into a corner with the storyline – the revelation of what exactly is happening to Vance and her team will have to be compelling if all the good groundwork he has laid isn’t to go to waste.  That said, The Whispering Dark #3 is an excellent example of the weird tale, and one you should all get your hands on.

The Whispering Dark #3 is an excellent example of the weird tale, and one you should all get your hands on.