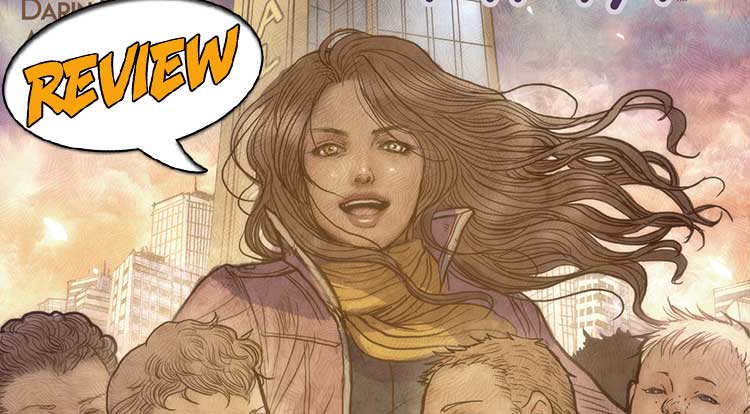 What is going on in Vertical City, and why exactly does Christian Krespo need some of Olivia’s blood? Find out in this exciting conclusion! Previously in Olivia Twist: Fagin and the Esthers sneak into the immigrant detention camp Badwa. Fagin is looking for the locket, sending Dodger to retrieve it, and insists this be kept secret from Olivia. Charles Leeford, Christian Krespo’s former business partner, put his files in this locket and keyed it with his – and his wife’s (Olivia’s mother’s) – blood. Olivia is Charles’ daughter. Krespo needs the information in the locket to take over the world, and Charles did not want him to do so. Olivia briefly meets her mother’s sister, Selda, before Monks kills her – and takes the locket, which she was wearing. There is fighting between the Esthers, Provis guards, and the Trads. Pip also shows up quite mysteriously and saves Olivia from being killed by Monks.

RESOLUTION OF A TANGLED WEB

So this is where things wrap up, in Olivia Twist #4, and we resolve the Olivia/Charley/Dodger love triangle. The story meanders back and forth, but it starts out dramatically with Olivia hanging on to a ledge, presumably up near the top of Vertical City – we’re literally starting with a cliffhanger.

Earlier, it was announced that Provis had captured Fagin, and she was being held at the top of Vertical City. Despite the strong feeling that this is a trap, Olivia is determined to go in, with Pip. At the same time, Krespo is talking with Fagin, who is tied up and being used as bait. He has the locket, Fagin says, what more could he need? Downstairs, Olivia and Pip walk in, and Pip shows her the ventilation grate they need to get into, and she trusts that he is showing her the right way.

Don’t forget that Charley is with the Trads. They’re set to beat him up, and he says he’s got intel on the Esthers and should not only be welcome back, he should be promoted. He gives them the code to the Esther base, and they make him get six pumpkin macchiatos. The Trads invade the Esther base and capture them, while in Vertical City, Fagin works her way loose.

Olivia reaches the 200th floor, having cut herself along the way. Pip leads her into unoccupied space – unoccupied by renters, that is, as Monks is there. She asks him why he is trying to kill her, and he responds cryptically. Pip notices that she is bleeding and feels that he needs her blood. He asks Olivia if he can take it, and she gives him permission. He then leaps out the window. Monks takes advantage of this to grab Olivia and throw her out the window as well, saying, “Goodbye, Sis.”

So now we’re caught up to the beginning – Olivia is hanging onto a ledge. Pip is…walking up the wall. (He’s apparently a robot.) And Monks steps on Olivia’s fingers, causing her to plummet!

And this is where the Artful Dodger (love her!) swings down on a torn banner to grab Olivia. They swing through a window into some offices and share a kiss, which is very sweet. Dodger explains what’s going on (off panel – we see enough of the end to get what happens), and Olivia realizes she was being used, and may not have really been accepted as an Esther. No matter – she is resolute that she is an Esther. About this time Fagin shows up to tell them it’s time to go, and that Krespo is set on ending everything, and they can’t stop him. But Olivia is set on finding Pip, and Dodger decides to stay with her.

Olivia and Dodger continue up, and run into Monks. They also just happen to be where the Esthers have been locked up. Olivia frees the Esthers, Dodger takes on Monks, and who should show up to interrupt the fight with pumpkin macchiatos, but Charley. This may seem like a lot of coincidences, but Dickens used coincidences a lot in his novels, so I find it fitting here.

Pip has reached Krespo, who says he needs to offload his recordings to prove that Olivia is wicked. He brings out the hologram of Charles Leeford, and we finally get more explanation. After the fall of America, he stopped tech development. He had Charles killed because he thought that machines would develop free will and take over. Eventually, everyone gets together here, and we find out more. Monks is Olivia’s half-brother. His mother died, he felt he was unimportant, and decided to kill Olivia’s mother and eventually her. Charles locked away his tech in the locket. He didn’t leave his half of the company to his son, Monks. But Krespo can only get control of it if he can prove that Olivia is evil. This all takes place in a room full of urchin robots.

Krespo learns that Pip saved Olivia’s life at the camp, and says that was incorrect – he wanted Olivia to be stabbed. At this point, we learn that the robots are alive and have free will, but the test was not about whether someone was evil, but whether they were good. The robots are willing to be led by Olivia because she is good; because she loved and trusted one of them, even when knowing it was a robot. Charles and his wife built a benevolent A.I. And the ending of this tale is the real beginning of Olivia’s story.

This was a lot of plot to pack into four issues. This is not a bad thing – Dickens himself put a lot of plot into his books – but it may mean that you have to read some parts over so as not to get lost, especially with the flashbacks and time jumps. I love the various Dickens title references throughout, and I really like the positive messages in this story. I think the conclusion is satisfying and uplifting – we can only imagine the possibilities, and that’s a great place to end a story.

I love the art in Olivia Twist #4. The linework is so clean and expressive throughout, and the characters are interesting and distinct. We never lose track of who is who, and where they end up makes sense. There’s a lovely scene near the start where Pip hands Olivia a red rose. It’s such a small gesture, but it foreshadows the ending. Also, with the generally cool color palette, the red of the rose really pops.

I like the use of panels to show that Pip and Olivia are climbing the tower – they enter at the bottom of the page and the action goes up from there. Subtle arrows direct our eye in a way that is clear but not obtrusive, including the panel dividers. When she falls from the building, there are long and angled panels which accentuate the height.

The coloring is lovely. The palette is generally muted, often cool, sometimes with some subtle sepia overtones. The use of contrasting colors is excellent and really makes the focal points stand out. It’s a really pretty book to look at. Everything flows and works together well.

As I mentioned above, there is a lot of plot to get through in Olivia Twist #4, but it is all here. We’ve been learning more bit by bit as the story goes on, and this issue ties everything together fairly well. There are times it feels like there’s an awful lot going on, and it can be a little confusing on a first read through, but overall it’s solid.

We’ve been learning more bit by bit as the story goes on, and this issue ties everything together fairly well. There are times it feels like there’s an awful lot going on, and it can be a little confusing on a first read through, but overall it’s solid.