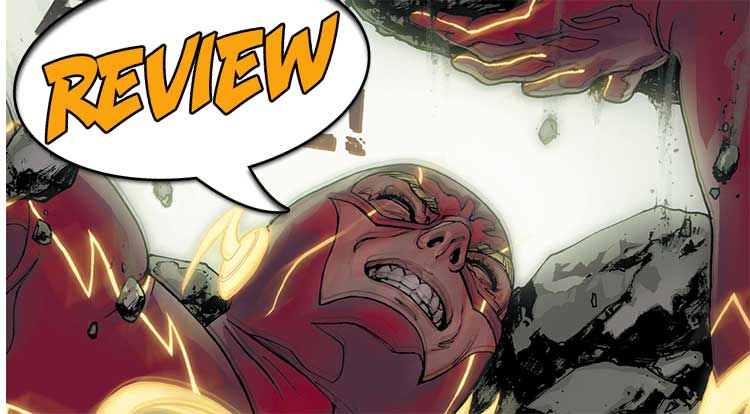 Barry and Iris continue their quest to locate all of the forces, this time with the Strength Force user Fuerza as a guide. But when they arrive in Corto Maltese, will they find the user of the Sage Force, or something else? Flash #61 from DC Comics is in stores today! Previously in FLASH: During the Flash War, it was discovered that additional forces existed. Besides Speed, the Strength, Sage, and Still Forces remained a mystery to Barry, one he is determined to understand. After visiting Gorilla City and gathering information, he teams with Strength Force user Fuerza to travel to her homeland of Corto Maltese to confront the supposed Sage Force user. What they find, however, is not a Sage Force user, but something different. Now Flash must save himself, Iris, and the innocent people of Corto Maltese, and possibly fight a new found friend along the way.

LIFE CHANGES IN A FLASH…

While his Iris faces down a squad of government soldiers to protect a group of civilians, Barry Allen and Fuerza battle with small, demonic looking blue men who seem to have appeared from a dark memory of the Strength Force wielder’s childhood. Flash tells his powerful ally that the Sage Force can access thoughts, and it must be accessing some unpleasant thoughts from her mind and using them against them. The more they fight, the more appear to fight back, It seems Cauldron, while not the Sage Force user they were searching for, has a gauntlet which allows him to tap into the power and bend it to his whim. Currently, he plans on using it to control Corto Maltese, but plans first to kill Fuerza and her family. Barry, being the whiz-bang scientist, explains to Fuerza that while physically punching the creatures isn’t working, she can use her powers to draw them to her and he can use him to speed up the force keeping them whole. In a blaze of science, the pair defeats the creatures and confront Cauldron. While Barry wants to see that Cauldron doesn’t use the gauntlet again, Fuerza has a different plan in mind, one that involves ending any future threat the would-be-dictator may ever have to her, her family, or the people of Corto Maltese. As he tries to stop his ally from going down that dark path, he only manages to infuriate her, which is something that is truly deadly, as she wields the force of strength. Flash must stop her and make her see the error of her desired plan, but stay alive himself. And what of Iris? Can she successfully stand off the forces of Cauldron?

Elsewhere, in Zandia, three colorful villains and a man sit around the table and play poker. That is until the villains’ prior victims come back from the grave to deal themselves in. Maybe the next stop on the Force Quest should be Zandia?

I HAVE TO WONDER, IS THERE A SARCASM FORCE?

With the Force Quest, Joshua Williamson (Birthright, Nailbiter) seems to be working toward paying off on plot lines and hints he has strewn throughout the past 60 issue of Flash and beyond. It is a payoff that seems to have been taking backseat to other issues, but we are slowly getting toward the secrets of the other Forces. I just wonder if it will really pay off? Some of the issues, this one, in particular, seem to almost be a railroad to the finish line passing all the interesting stops. There are essentially three big payoff scenes in this issue and they are satisfying, it feels as if it is being rushed along. If you have kept up with the series for a while and know all the different point on the various Forces and how they work, Williamson’s tale seems like a barn burner. It has pinpointed the objective this issue and works for it at a breakneck speed. However, if you have only been around for a few issues, or maybe this is your first, it seems pretty odd. Take the title, “Buried Alive.” This is most likely a reference to Fuerza’s powers and how they work, but it overall is confusing for someone not familiar with that part of the tale. I love his treatment of Iris and Barry, and their relationship seems solid and real and it is actually more enjoyable to me than the whole quest. Also, Williamson enjoys laying out little moments that make you go, “Did I read that right?” and is very successful in setting up threads to explore in the future.

Christian Duce’s (Ides of Blood, Batman: Arkham Unhinged) artwork is great, as usual. He has been a driving force behind this whole storyline and his eye for detail works great with a speedster character. Some artist would just fade or bur everything, but he hits a pleasing balance with his artwork and panel progressions. I’ve enjoyed his art and hope to see more in the future.

BOTTOM LINE: ADVANCING ON THE CLIMAX AT THE SPEED OF…

While I have liked much of Williamson’s work on Flash, this particular issue seemed as if it was a quick little off-ramp on the road to the finale. It’s as if it were a little housekeeping which needed to be done, and now we are off again. I enjoy the art, and Williamson’s characterizations are spot on, but I would like to have more a feeling of advancing on a destination instead of a Sunday ride.

But the run down memory lane visiting on famous locations in the DCU is a treat. After Zandia, I wonder where we will end up next?