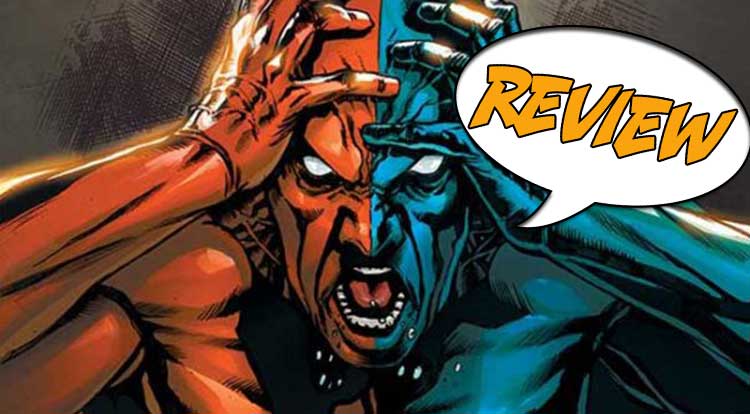 The alien being known as P:Andora stalks the earth with the Death-Defying Devil under his control. His focus – Imani Cooper and the Flag! Previously in Project Superpowers: The Death-Defying Devil, controlled by P:Andora, fights Masquerade and the Black Terror to get to Imani Cooper. P:Andora has already disabled much of the tech across the earth, except for that of the Scarab. The Scarab realizes the alien’s ship is powered in the same way as his suit, and he tries to destroy the ship. Instead, P:Andora cuts off access to the power, leaving the Scarab to plummet to earth. However, Samson realizes this, leaves his own fight, and saves the Scarab. Imani wakes up to find the Flag pinned to the wall and a giant Death-Defying Devil about to grab her!

CENTERING ON THE FLAG

Project Superpowers #5 opens with a flashback to Imani as a kid, and not just a kid, but one who is willing to stand up to bullies. She tries to talk to one, even talking about punching up vs. punching down, ultimately to no avail – she gets knocked down and her glasses are broken. But it tells us a little more about this young lady and perhaps why the Spirit of the Flag has chosen her.

In the present day, the giant Devil is about to crush Imani when the Scarab flies through and grabs her. Well, he doesn’t exactly fly – he was flung, by Samson. And again, playing into the fact that Samson is blind, he asks if this worked. I do like that he doesn’t just somehow know what’s going on. The Scarab tells Imani that he, and the rest of them, are out to save her, and she puzzles out that P:Andora must be after the Flag.

P:Andora overhears this, and realizes that Imani doesn’t know what the Flag is yet. He sends his minion, Hesiod, to find P:Andora’s box. Hesiod has a human/tiger torso and the lower body of a snake.

While Hesiod heads toward the flag, Black Terror is holding Masquerade up (by one ankle) as the hospital collapses around them. They see the Flag trying to pull free, but unable to do so, as Hesiod approaches it. Masquerade has the Black Terror fling her toward the Flag. At the same time, the Devil has caught up with the Scarab and Imani, only to be struck with a building as Samson calls out, “Swing, batta!” I will forgive the structural impossibility of picking up an entire skyscraper like this for the sheer drama, and Samson’s declaring that this is a basketball reference. The humor behind Samson is delightful. But it is short-lived as P:Andora arrives and knocks him out of the picture.

The Black Terror’s aim was bad, and Masquerade plummets near the Flag, which reaches out to grab her – and she vanishes! Hesiod realizes that the Flag itself is a portal, and the Box must be hidden inside it. The Black Terror, making good use of his invulnerability, plummets onto Hesiod to stop her, at least for now. Then he knocks into P:Andora as he is about to strike down Imani. P:Andora stops long enough to stomp him into the ground, and Hesiod pulls herself up to finally get to the Flag. Masquerade pops out and grabs her daggers which were holding the Flag, and it races to envelop Imani.

Imani stands up to P:Andora, as she did to the neighborhood bully long ago. But he does not fight fair. Who is he to be bound by the physical laws of Earth? He causes a chunk of the city to float off without gravity, and reaches for Imani who is holding the Box.

Project Superpowers #5 is pretty much a fight from start to finish and involves a lot of characters in several places. The art steps up to the challenge of keeping this both exciting and clear. There’s great use of different sized panels as well. We have some huge characters, and several who are more normal sized, so it’s awesome to have the big ones set off in a way that we feel that size viscerally.

Again, there is really good character expression throughout. I really got the feeling that everyone was trying their utmost in this fight, and that they were thinking throughout, changing plans as the situation changed around them. I also loved, as always, the flowing capes and costumes of which there are several. I think that adds to the sense of movement on pretty much every page.

The lettering is terrific. It has always been clear for dialogue in this book, but this is an issue with a lot of drama. There is good use of different sizes of lettering, and boldface. This is an issue full of sound effects as well, and they are varied, appropriate, well-placed, and fun.