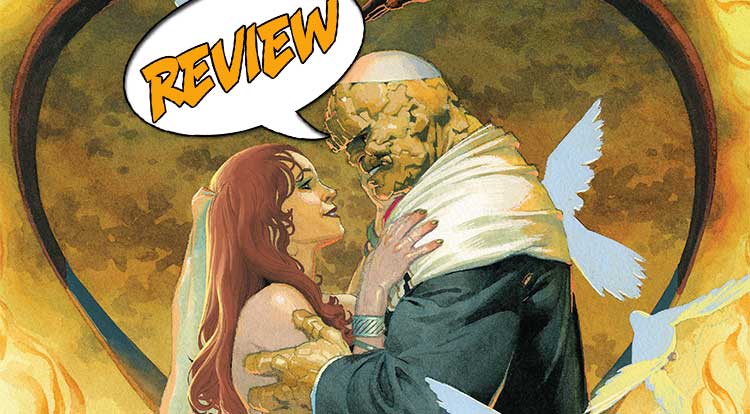 The Fantastic Four have returned, and their arrival from the far reaches of everything has been a wild ride already. Now it seems as if there is more wildness in store as we prepare for the biggest wedding Marvel Comics has seen in years! Did you get your tux? Your invite? Check out Fantastic Four #5 from Marvel Comics for the wedding of Ben Grimm and Alicia Masters! It’s on shelves now! Previously in FANTASTIC FOUR: After having save the everything and the everywhere once again, this time with the assistance of almost everyone, the Fantastic Four have returned to New York to discover the Baxter Building is occupied. A few dimensional portals later, and they are setting up house in the apartment of the ever0loving Ben Grimm. But, wait, doesn’t Ben have a wedding to prepare for?

FALLING IN LOVE IS THE EASY PART

With the Baxter Building currently occupied by The Fantastix (you did read Fantastic Four #4 last month, didn’t you?) the team…I mean family… have decided to move into Ben Grimm’s apartment at 4 Yancy Street. Johnny Storm and Wyatt Wingfoot are helping in the move, as is Susan Richards, under the watchful eye of Alicia Masters. But the apartment is so small, how does a family of four, a confirmed bachelor, and a pair of newlyweds plan on living there? Well, as Susan finds out, her husband and daughter have been working on that. Daughter Valeria explains to her Mom that she and her Dad just added a few extra dimension to the apartment, and voila! You have instant space!. But much to Susan’s disappointment, she finds that Reed is once again engrossed in his experiments. He is so busy with something that he leaves his best friend, to whom he is the best man, on hold with a wedding prep emergency! Handing off to the wife, he returns to his labors as Sue goes to rescue her rocky orange friend, and assist in some important lessons in dancing. During her time tutoring Ben in the finer points of the vertical expression of horizontal desire, she thinks back to before it all started, and we are given privy to some never before revealed information in the process.

Back at 4 Yancy Street, Johnny finally finds his brother-in-law and berates him for neglecting his duties as best man, mainly the organization of a bachelor party. Reed, unfortunately, is still pre-occupied and asks Johnny to step in and take over that particular chore. The night involves superheroes, serpentine strippers, and more than a little partial nudity from some of the biggest male heroes in the Marvel Universe! But is Johnny only in it for the babes and fun, or is he dealing with something else altogether?

The next day in Benson, Arizona, such a fine sight to see, the fabled Aunt Petunia and Uncle Jake meet the small wedding party as they prepare to partake in the wedding of their favorite nephew. Unfortunately, it seems the whole family is not there. Reed, still busy with an experiment, has stayed behind, telling Sue he will meet them there. Will he? And will Ben’s proclamation of inviting no superheroes, as to avoid “shenanigans”, work? Well, not if Doctor Doom and Galactus have anything to say about it? Will there be a wedding?  Can there be?

You have to pick it up to find out, but it is a doozy of an ending.

THE BEST LAID PLANS OF WIVES AND SUPERS…

Dan Slott (Astonishing Spider-Man, She-Hulk) continues his re-introduction of Marvel’s First Family with this issue, an extra-sized extravaganza that delves into the behind the scenes occurrences of the most famous family in comics, all while preparing for the possible wedding which all wondered about and leaves us on the edge of our seat as to if it ever will happen. Weddings in the real world are an undertaking but throw in the insanity which constitutes the orbit of the Fantastic Four and you have a near Herculean task. Slott is one for the inner dialogue, and this issue is chock full of it. The characters feel grounded with problems which many people can relate to, but at the same time, they have that touch of the cult of personality which makes them so fantastic. He shows you their hearts, and makes you feel for them, all while parading them around in skin-tight suits and fighting otherworldly beings. This issue is full of little moments, and it is broken up into three separate vignettes by different artistic teams, all melding to tell a wonderful story.

“4-Minute Warning” features artwork by Aaron Kuder (Guardians of the Galaxy, Death of X), and it serves as a sort of framing story for the other two tales and sets them up. Much of the focus on this part of the tale falls on Reed and his seeming inattention to his friend’s future, and the style is good. He gives you’re a Fantastic Four, mostly, outside of their unstable molecules and makes them look and feel like a family. This story also wraps up the issue, but not before leading you to the other two tales it contains.

“Changing Partners” is presented with art by Michael and Laura Allred (FF, The Unbeatable Squirrel Girl), whose style has always found a visually sympathetic home with the Fantastic Four, give life to Susan Richards as she remembers her times before the Fantastic Four, and the things she felt and did which led to the life she was experiencing now. The Allred’s style is always a treat, and their cosmic and way-out style works just as well for a story centered around a friend giving another a dancing lesson.

“Guys Night Out” details the results of Johnny Storm planning a bachelor party, and the decedent nature you expect from the world’s most fantastic bachelor is wonderfully nailed by fan favorite Adam Hughes (Wonder Woman, Catwoman) If you had to imagine a wild night filled with drinking, cards, and strippers in a superhero world, you could not find a better artist to visualize it than Hughes. Besides, he is perfect to draw a nearly nude… well, pick it up yourself to find out which Marvel male heroes have surprising losses at strip poker.

Much of the focus on the Fantastic Four since their return has been on the team as a whole, where they have been, what they have done, what they plan. This is a group which has been through almost as many different members as the Avengers, and they are rightfully considered the Beatles of the Marvel Universe. Slott has managed to handle their return in not only an action-packed way, but in a way that challenges your expectations. He has done similar work with other Marvel heroes in recent years, and love him or hate him, he will take you places you never knew you wanted to go. I would possibly be willing to put his Fantastic Four up there with the runs of Marv Wolfman and John Byrne, but only time will tell.