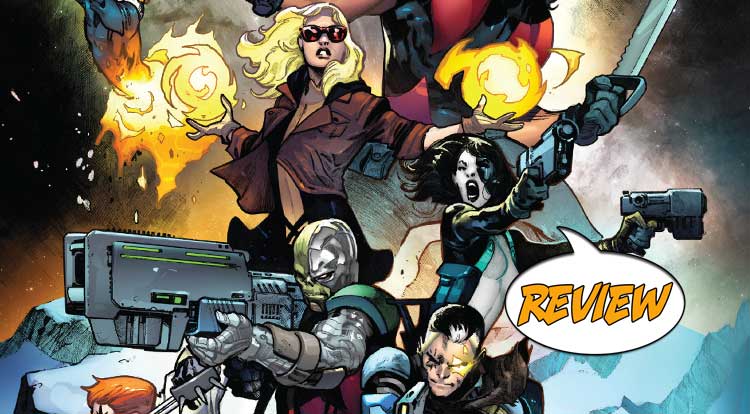 Cable is dead.  Can his former strike force bring his killer to justice?  Your Major Spoilers review of X-Force #1 awaits! Previously in X-Force:  Cable is dead… and now, the original X-Force team of Domino, Cannonball, Shatterstar, Boom Boom and Warpath. must hunt down the murderer of their former leader!  The mutant militia are hot for blood… but when their target is the time-traveling younger version of their fallen mentor, is there a line they absolutely cannot cross?

So. long story short, the fifty-something cyborg mutant known as Cable who is actually the son of Cyclops sent back in time from the future has been shot by his own younger self. a twentyish Cable who lacks the wisdom that makes his older self tolerable.  Because of this, the founding members of X-Force (Cannonball, Shatterstar, Domino and Warpath, because Boom-Boom overslept and Feral is dead, I think) have reunited to bring him to justice.  Tracking Cable’s actions, X-Force engages with a group of terrorists, following the leads to Transia.  The President of that tiny Balkan country has allied with Cable to make his country a haven for mutants, to the consternation of his top general, who remembers what happened to Genosha.  Cable has been using Deathlok… for some reason?  And when X-Force arrives, it’s right in the middle of a political coup, as the people of Transia rise up against the influx of mutants to their homeland.

And then, the President is shot in the head by his own general, who blames X-Force for the murder of a sovereign government leader.  So… that’s bad.

The best part of this issue is the embracing of Boom-Boom’s nextwave-era character, as the backup story in the issue involves her missing her alarm and waking up too late to make the lead story.  It’s sort of a blessing, as the art in her half of the issue is much better than the lead story, which makes everyone seem elongated and bulbous, especially Warpath.  Worse still, it’s hard to tell who is who from panel to panel, which shouldn’t be a problem with characters that look this distinct from one another.   Boomer’s half of the book feels like a better read, as well, as X-Force #1 seems to be embracing its roots as a terribly-written 90s-style mess.  Still, all of that might be forgiven if not for the decision to muddy the temporal waters with YET ANOTHER DIFFERENT DEATHLOK!

I’m only half kidding about that one.

BOTTOM LINE: NOT TO MY LIKING

Still, I can’t blame a creator for fully leaning into an aesthetic just because I don’t like it, and I recognize that Liefeld-era X-Force has its fans.  Unfortunately, X-Force #1 has enough flaws in terms of the art and the storytelling that I had a lot of trouble understanding the events of the issue, and even those moments that work are marred by the difficulties with the main story’s art, leading to a disappointed 2 out of 5 stars overall.  There are a lot of things to like in this issue, but the serial killer Deathloks, graphic nonsensical violence and missing narrative connective tissue bring the whole package down for me, but as always, mileage may vary.

Continuity issues, art problems and some unclear story bits combine to make for a hard read, but the backup story is a lot of fun.