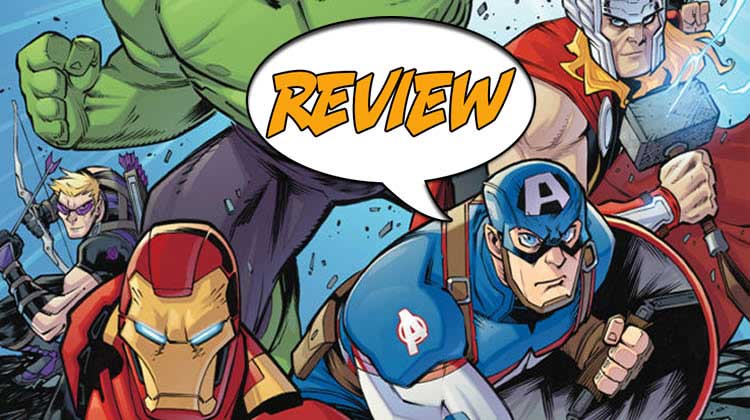 “A brand-new ongoing series for the next generation of readers!”

That’s how this book is described. It’s also how the other new comics in this group are listed, so it’s the House of Ideas and IDW working to attract younger readers who may not be as familiar with today’s heroes.

SOLICITATION: A new era of all-out Avengers action begins! A new team is formed to battle a mega-sized threat that is weirder and wilder than any the superheroes have met before! This new ongoing series will be the perfect opportunity for middle-grade readers, and fans of all ages, to experience the thrilling adventures of Avengers comics for the first time!

I was really stunned to read that Marvel was teaming with IDW to create comics for potential new readers. As I understand it, the logic for this runs this way: IDW has developed quite a young adult following, and Marvel wants to tap into that with books designed to bring in new fans.

One big difference between this issue and more traditional Marvel comics is the action level. There’s much more punching, kicking, and other things flying around and moving in this book than in your average House of Ideas offering. Obviously, this is to catch the attention of videogamers and the like who want things to happen, and fast! The one place it slows down to a crawl is when Captain America is talking with Madam Masque, trying to get her to spill on A.I.M.’s plans. Wow, that that crash and burn!

My biggest beef is that this story will be continued in future books. I would have much preferred they told a single-issue story, but it seems that Marvel is entirely focused on trades and making them. Not reaching a conclusion might deter some younger readers. They want things to happen, but they often want them to come to some kind of ending. At least, that’s my perspective on all this.

The characters are largely true to how Marvel portrays them, but the biggest baffler may be that Tony Stark gets into his Iron Man armor only to think that he’s now an agent of A.I.M. and he’s trying to get it to that covert organization. We do see the waiter in a restaurant slap a device on Tony’s neck (It’s never good when that happens.) Obviously, it’s A.I.M. behind that, but the plot is simple enough that it should have ended this time, I think. Maybe it’s just me, but I felt like the story was “talking down to the reader.” I always hate that!

We get to see many familiar Avengers appear, including the aforementioned Iron Man, Captain America, Thor, Black Widow, and Captain Marvel. As far as baddies go, A.I.M. has recruited Madame Masque and the U-Foes, somewhat familiar enemies. But it all seems too much at times. Costumes and powers running around fighting each other make for a great videogame, but a comic? Not so much!

The pacing is quick, and the dialogue is brief when it happens. (Boy, is that different from the regular Marvel comics!) I’m not sure how Marvel expects younger readers to “graduate” into their current books instead of sticking with IDW’s version.

The artwork is much more cartoony in style than the ultra-serious Marvel books. The images are sketchier, probably to match the activity. It also has more of an animated feel to it, so maybe they’re hoping viewers of Disney XD will read this!

There’s a much more “frantic” feel to the layout as well, with bigger pictures and brighter colors. The rooftops of New York City are apparently really bright at night time, if you go by this book.

And covers! I’ve never seen so many! Did they release this book with that many covers? Hope not!

I have a friend I used to work with who always told me, when I didn’t like something “aimed” at younger readers, that “they didn’t make that for you!” But if it truly is “all ages,” then even an old fogie like me should be able to read and enjoy it.

Bright colors, things spinning and twirling all over the place, simpler dialogue and familiar characters—yep, this book is using a megaphone to say, “Calling all new readers! We’ve got just the comic for you!”

You can probably tell that I’m not much for stories that “talk down” to readers. I’d like some more plot, some more character, and (I can’t believe I’m actually saying this) some more dialogue. (You’ll probably never hear me say that ever again!)

It’s an okay book in that it’s visually active and has Marvel heroes I know, but I’m not sure it’s going to be enough to keep this line going. But we’ll see!

Not an auspicious start to this whole project. Or am I just getting old? It could be!

Yep, this book is using a megaphone to say, “Calling all new readers! We’ve got just the comic for you!”