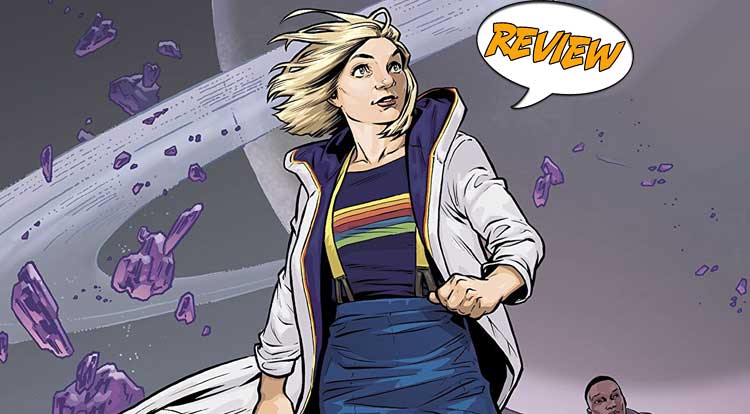 Doctor Who: The Thirteenth Doctor #3 Review

Time to VWORP with Thirteen and the TARDIS gang once again!  Your Major Spoilers review of Doctor Who: The Thirteenth Doctor #3 awaits! Previously in Doctor Who: The Thirteenth Doctor:  The bumpy ride for The Doctor, Graham, Yaz and Ryan isn’t over yet…  and now Perkins wants to steal the TARDIS!  But The Doctor feels there is more to this mysterious time wanderer than meets the eye.  Can she get through to him before he does something terrible?

A GUNMAN IN THE TARDIS

At the close of last ish, The Doctor was surprised to find that the latest stray she saved from certain destruction is kind of a jerk, pulling a weapon on her and announcing his intention to steal her TARDIS.  She tries to talk him out of it before revealing that his weapon has actually been deactivated since he entered the ship.  Rather than throw him in the brig (which I’m not even sure the TARDIS has?), The Doctor instead decides to talk it out with him.  It seems that Perkins is a first-time time-traveler who fell into the hands of a creature called The Hoarder, who forces him to steal priceless treasures from all over time.  Hoarder claims to have his children, grandchildren and great-grandchildren locked up, which upsets The Doctor greatly.  Setting off to find the would-be time Fagan, Team TARDIS ends up working their way through a mysterious temple, Indiana-Jones-style, ending with a desperate leap down a dark tunnel while The Doctor tries to remember what it was her Eleventh self used to yell at times like this.

A BIT WILD IN THE ART

The likenesses of Jodie Whittaker and the TARDIS gang are quite good in this issue, and my usual worry about over-posed shots or lack of expression aren’t a problem.  In fact, almost the opposite is true, as Thirteen’s face is capable of wild contortions and seriously mad faces throughout this issue.  It’s not quite a deal-breaker, though, as the storytelling and use of setting are quite good.  The interior of the new TARDIS looks excellent, and that’s a really hard set to draw.  The story is likewise quite good, clicking along from point to point without any problems and making great use of the Doctor as a character.  Her insistence on not punishing the man who threatened her and tried to steal her ship is characteristic of Thirteen’s reticense to resort to violent retribution and her fascination at the hidden temple is a lot of fun.  The issue’s cliffhanger is strong as well and the concept behind the villainous Hoarder is quite clever.

You can’t hate a comic book that does that much that well, and the way Houser has captured the voice of Thirteen is remarkable, leaving Doctor Who: The Thirteenth Doctor #3 with a very impressive 4 out of 5 stars overall.  Titan’s Doctor Who range has successfully captured another Time Lord’s best essence in comics form, making me look forward to their next big crossover between all the new series Doctors.

Expressive art (sometimes TOO expressive), solid dialogue and a plot that clicks along nicely, plus a good sense of Thirteen's "voice" make for a good read.