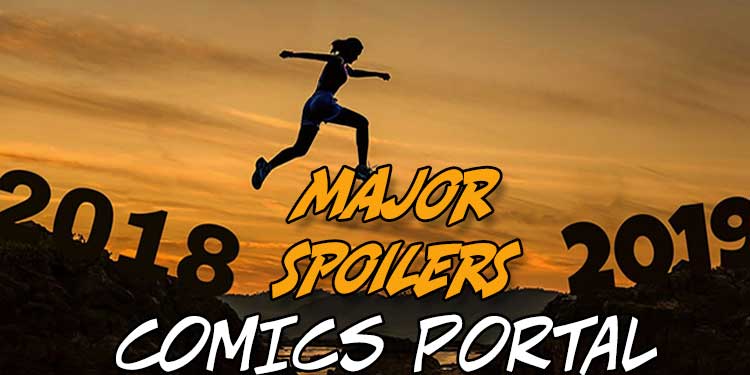 COMICS PORTAL: What Will Happen in 2019?

At midnight tonight, we leave 2018 behind and stand at the precipice of a new year, 2019. Psychics make a living out of predicting the future, but while I’m no psychic, I have some thoughts on what we just might see in the coming months.

Marvel has been working towards it for years now, and I think they’ll take the plunge in 2019 and make the cover price for pretty much all of their comics $4.99 each. I know, I know… budgets everywhere are being blown at even the thought of such a thing! But with the cost of production continuing to rise as well as the salaries of creators burgeoning, it will likely be met with a whimper instead of a bang.

While part of me wants them to add extra pages (as they did in the recent Civil War II series), part of me hopes they don’t do that. Yes, we want our money’s worth, but splash pages and more cover pages alone don’t increase the value of a comic.

Might I suggest something to work for in 2019? Make the stories better! If the books are high quality, I don’t think a cost increase will be so repugnant.

Now, what will the rest of the industry do? I think they’ll follow suit, with some increasing prices in 2019, others waiting until 2020. But I expect we’ll see the last $1.99 or $2.99 comic (except maybe from Alterna as they print on newsprint paper).

INDIE COMICS WILL CONTINUE TO RISE I’ve long believed that some of the most creative storytelling is not happening in the “Big Three” or those close to them. They can be found in Indie comics, the ones made by creators who don’t have to hit the reset button at the end of every issue so another creative team can take over and tell another story next month.

As I seek out different Indie books through cons, online or through social media, I keep coming across things DC or Marvel could never do… at least, never do successfully.

One creator actually killed off the main character in a series just to see how the people around that person would react. That was a fun story, but Marvel can’t kill off Spider-Man or DC lose Batman. Sorry, not going to happen!

I’d really love to see a system developed that helps fans access Indie comics much like the Diamond Previews magazine. It’s a lot of effort, I know, but it would be so worth it!

The trouble is that many Indie books, well, suck! Some creators are just getting started and make rookie mistakes in storytelling while others… well, they may have some good ideas, but when it comes to telling a good story, that’s another story, to be sure.

But I keep encountering such creative storytelling out there that we truly NEED to make access to Indie comics much easier. I hope it will happen in 2019.

Some of the following come under the “well, duhhhh” category because they can be pretty obvious. Some may not be so clearly apparent.

Marvel will continue to stay at the top of the heap. At this point, it will take something of earthquake-like proportions to unseat them. The bad news is that they’ll continue to struggle with their characters. Marvel is trapped. They have properties people like but may not support when it comes to plunking down money each month. If you stray too far from what the public expects, you get even less support. What’s a company to do?

DC will be replaced at #2 by Image. Look, I’m a DC guy at heart, but I keep seeing the Image fanbase continue to grow more and more fanatic about that company’s product. I don’t know what’s going to happen at DC. Marvel is considered THE cool company, and DC has yet to find a way to combat that perception. Several of their recent initiatives have been met with a tepid response at best even though the books are pretty good. But I still keep running into the old adage: “The worst Marvel is better than the best DC.” I wish I knew how to change that perception. Image, on the other hand, is also one of the cool companies, and there are stores that way, way overstock Image product from month to month and apparently, don’t mind throwing out Image titles that don’t sell. How do you fight those perceptions?

The success of digital comics will continue to rise, albeit slowly. People still aren’t warming up to buying and reading digital books as some expected. I love comixology.com when I need to find something to catch up on or just read. However, because the collectability factor is truly nil, many folks simply won’t buy them and fill up their hard drives like some do today.  There will continue to be some rabid fans who love the color of the page on the computer screen, but the rest of us will use it pretty much only occasionally.

The small and large screens will continue to discover that comics characters can work for them. I’ve often talked about how TVs and movie theaters are finding success in bringing comics heroes and villains to life. That’s not going to slow down any time soon, I believe. After all, every single comic is a roadmap on how to bring that story to life. Directors, your work has been done for you by comics creators! Syfy is a perfect example with Deadly Class bringing the creator to the new show’s helm. I expect to see more of that in 2019.

The Pop experience will finally pop its last pop in 2019. The friends I know who are big into Pops have largely curtailed their spending, and stores are selling them at rock-bottom prices. I fear it will be like Beany Babies—one week, the store I frequented just threw them all out and replaced them with something they felt they could actually sell. Sorry, but I expect Pops to go that way in 2019.

What do you think? What will happen to the comics industry in 2019? Will it be the year things turn around or will comics sales go downhill? What predictions do you have for the coming year in comics? Please be sure to share your thoughts below, and have a Safe and Happy New Year in 2019!