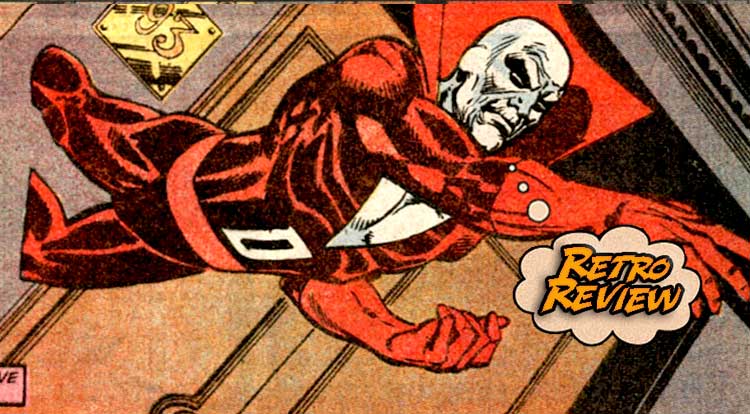 Once upon a time, Boston Brand managed to be the Ghost of Christmas Past, Present and Future all at once…  Your Major Spoilers (Retro) Review of Christmas With The Superheroes #2 awaits! Previously in Christmas With The Superheroes:  The end of the 1980s were an tumultuous and exciting time for the DC Universe.  The Crisis on Infinite Earths had combined all the various parallel realities into one almost-coherent whole, a timeline that allowed Captain Marvel to join the Justice League and Captain Atom to fight alongside The Batman, but things were lost along the way.  It was a world where Wonder Woman never rode a kangaroo, where Batman never had a dog inna mask, and a world where Superman never had a younger cousin who followed in his footsteps.  That last one was among the real tragedies of the post-Crisis DCU, if you ask me, which is why this issue sticks with me, decades later.

Like most Holiday Specials, this one is an anthology.  It opens with a pretty good Superman tale where he saves a suicidal man from freezing to death, followed by a nice Batman tale from Dave Gibbons and Grey Morrow (!!) which focuses on the need for light to balance his darkness.  (That’s a lesson modern DC could still stand to learn, BTW.)  Wonder Woman faces a crisis of faith in her story, featuring lovely art by Eric Shanower and John Byrne gives us a tour de force tale of Enemy Ace, completely without word balloons and honoring the work of Kanigher and Kubert.  There’s even a team-up of the recently deceased Barry Allen and the not-quite-yet deceased Hal Jordan, helping a modern Scrooge find his holiday spirit.  But it’s the last story in this issue that always brings me back for a reread.  We start with Boston Brand, the Deadman, possessing a rich jerk and making sure that he treats his employees (and Boston’s old pals in the circus) to an extra-special holiday. After years of being a traveling, disembodied spectre…  No, wait, that’s the other guy.  After years of being a traveling, disembodied revenant, Boston has what I believe the French call ‘un petit ennui.’   He can’t visit his old friends at the holidays, because it’s too isolating, and spending time in the bodies of strangers is even moreso.  He spends a little time skating at Rockefeller Center before jumping into the mind of a young man in love.  When “Paul” is about to kiss his girlfriend, Boston considers leaving, but stays on instead, enjoying being alive and going along to their family party.  He opens all of Paul’s gifts and sits down to dinner with the family before guilt overtakes him. Fleeing before he can witness the confusion he has sown, Deadman flies into the streets of New York, once again bitter about his lot in (after)life, even shouting to the gods that he actually knows exist because they have literally spoken to him.  (The DCU is a pretty wild place, y’all.) Approached by a beautiful stranger, Deadman tries to find out who she is, but is drawn by his loneliness into a conversation about how hard it is for him to do good.  He spends every conscious moment trying to do good, and not only does no one ever thank him, they never even know he was there!  Then, the blond woman asks the proverbial armor-piercing question: “So you want recogniation, then?  You want glory?” As I write this, I’m on my third pass-through of this issue for Retro Review purposes, the latest of dozens of readings of this particular comic since it arrived on my 19th birthday, and EVERY SINGLE TIME, I get goosebumps.  The woman reminds Deadman that he does what he does because it is right, because if he doesn’t do it, no one else will, no one else CAN.  It’s some good advice, not only for Deadman, but for anyone who faces an existential quandary…

Then comes HIS armor-piercing question. In the year 2018, when you can watch Supergirl on Sunday nights on the CW, it’s hard to remember that she was not only KILLED during the Crisis on Infinite Earths, that she was retconned away as never having existed in the new continuity.  For nearly 30 years, Kara Zor-El was a non-entity.  To be honest, I’m a little surprised that this issue made it through, something that I attribute to the strength of Alan Brennert’s story and Giordano’s beautiful pencils.  Christmas With The Superheroes #2 is one of those rare nearly-perfect reading experiences, with a number of cute/cool/touching stories, excellent art in every chapter and a final tale that is a for-real classic story, earning 4.5 out of 5 stars overall.  If you ever encounter it in a back-issue bin, I implore you to pick it up, especially if you’re a fan of Supergirl, but it’s a great comic even if you’re not.

One of the perfect holiday anthologies, featuring another gem by Alan Brennert, whose DCU work is always amazing...