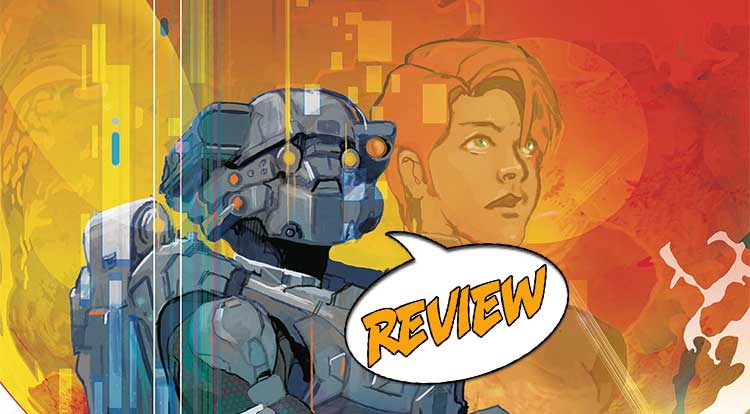 A distress signal from a rogue scientist thought dead and survivors of a lost frigate prompt the powers that be to assign Spartan II soldier Linda-058 to investigate and retrieve. What has this scientist been up to all this time, and what of those who crashed planetside with him? We will find out in HALO: LONE WOLF #1 from Dark Horse Comics. Previously in HALO: LONE WOLF: It’s been over a year since the Fall of Reach, and the war is over. Earth and Covenant have an uneasy peace. One of the last Spartan II survivors, Linda-058, trains with her unit when she is called in. There is a mission, and only she can handle it.

In the training area known as the Ivory Tower, Linda-058 trains with the rest of her team. They are all highly capable soldiers, but none of them can stand up to the expertise of Linda and her sniper rifle. After taking out her team, she receives a page from the Command Room. It’s time for a mission briefing.

When she arrives, she is briefed by an officer and an ONI AI program named Athos. It seems that a scientist, Doctor Chen Bax, had tried to steal classified tech. Before he was taken into custody, he was reported killed in action at the Invasion of Reach. Around the same time, a frigate named the Promise of Dawn disappeared. Now, over a year later, they have received a distress signal from a Covenant controlled planet. They are actively blocking signals and the distress signal used Covenant encryption tech. Linda is to deploy to the planet, Sephune III, locate and deal with Chen, and then rescue any survivors from the Promise.  While she will be going in sans her team, she won’t be alone. The AI, Athos, will accompany her.

When they arrive on planet, Linda locates a dead UNSC soldier and waits for either the survivors or the Covenant to attempt to retrieve the body. The survivors do, with the Covenant close behind them. What follows is a game of cat and mouse that leads Linda-058 to believe there is much more going on than even the secretive ONI could suspect.

ONE SPARTAN, ONE MISSION, ONE SHOT

The Halo Universe has grown from a collection of hints and allusions in the original Xbox game to a full and rich universe filled with heroes and villains, conflicts and crisis, all its own. It is a rich and deep world, and anytime you step into it you are bound to learn something new.

Writer Anne Toole (Crystal Cadets, Grimm Fairy Tales: Dance of the Dead) steps into that world and lays us out a story of a survivor and her search for different kinds of survivors. The character has been peppered throughout the story of the games and novels, and it is nice to see her take a center stage here. Thanks to Toole’s writing, I was drawn back into the world of Halo easily, taking only a moment to situate myself into the correct chronological time of the story. I enjoyed the AI character of Athos. He provides a direct opposite to Linda-058 and her solitary demeanor. He shows himself as chatty and not afraid to express his displeasure with actions she takes. Visually, his French swordsman clothing fulfills the idea of the AI taking on different personas. I could not help but hear John Cleese as his voice. My only complaint with the overall script, and this is something I notice in multiple Halo series, is that you’re not introduced to the officer sending the soldiers out on a mission. It is a little thing, and if I missed her name, I apologize. Overall, it is well written, well-paced, and a nice addition to the Halo universe.

Penciller Kieran McKeown (Longstone Comics) and inker J.L. Straw (The Young Sherlock Holmes Adventures) are in charge of the visuals this time out, and I enjoyed it. The proportions are correct for the characters, even those in armor, and it looks very much in the Halo vein of visuals. There is quite a lot of detail in the armor of the Spartans, and they did not skimp out on any of them. There is great continuity from panel to panel and page to page, and that consistency shows an attention to detail that can sometimes be faked. Here it isn’t.  The cover by Christian Ward (ODY-C, Black Bolt) is amazing. It is meant to catch the eye and his bright use of colors and fades does the job wonderfully.

BOTTOM LINE: AN ENTERTAINING FIRST LEVEL, BUT LET’S WAIT TO SEE THE NEXT

I have had occasion to review multiple Halo titles, and this one has a better feel than many of the ones from before. We move away from John-117 as the main character and bring another to spotlight. The fact this is a female character is just icing on the cake. She comes into the series as a well-developed character, and her treatment here is solid.