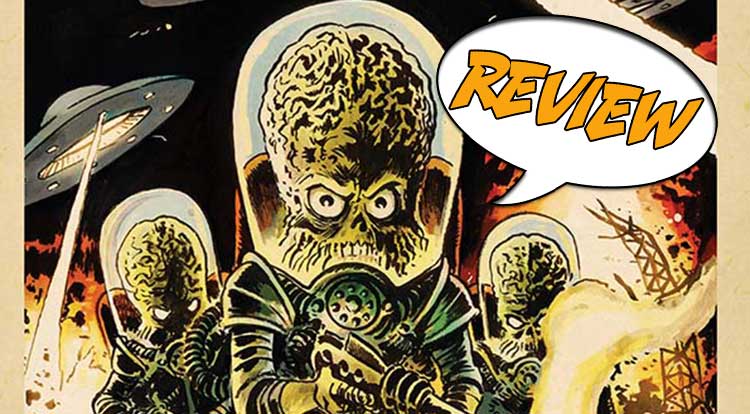 The Martian invasion is in full swing as Spencer continues to wheel his father to some sort of safe haven.   Now part of a military convoy headed to Fort Woods, the Spencer finds himself under attack by not only the Martians but by his own father. Let’s take a look at Mars Attacks #3 from Dynamite Entertainment. Previously in MARS ATTACKS: The Martian invasion of Earth has begun, and Major Carbutt and his son, Spencer Carbutt, continue their escape from the Green Tide. Able to join a military patrol on their way to Fort Woods, Spencer tries his best to keep his father safe. The Major continues to ridicule his son and Spencer tries to explain, gently, to his father that he is not the kick-ass, Rambo sort of man that he wanted his son to grow up to be. Besides the family strife, the Martians are on the advance, decimating human civilization.

DID YOU PACK THE BUG SPRAY?

The Major, seemingly loving the sound of his own voice, is telling a story. It seems when Spencer was young he wanted to play tennis. His father, ever the manly man, relented and let him play. After a little while, young Spencer lays down on the court with his racket as the tennis balls bounce past him. Fort Woods is still quite a distance away, and Spencer does not relish the trip. As he pushes the wheelbarrow carrying his father, the old man continues to berate him. This time he admonishes him for leaving the military, but Spencer explains that it did not make him happy. “Jobs aren’t fun, Spencer. If they were they wouldn’t be called work…” is his father’s reply. The convoy is approaching a town, but before they can fully enter it, Mars Attacks!

The soldiers spot the saucers first, but what follows is something outside of their already expanded experience. Giant, flying insects with glowing green eyes and gaping maws decent on the convoy, killing some soldiers with ease and carrying others away. As the giant insects begin to carry the armored vehicles into the air, Spencer wheels his father into a storefront hoping for cover, but discover that the glass pane windows provide easy access for the monsters. The pair, and their dog, escape and search for a new hiding place. As they enter the streets, they witness the Martian troops descending on the town; bring the fight to a new level. As Spencer attempts to find cover, his father’s admonishments finally get to him. What follows greatly affects their father and son relationship and changes their journey.

WHERE’S SLIM WHITMAN WHEN YOU NEED HIM!

In case you didn’t know, let’s have a little history lesson. Mars Attacks was a property originally published as a trading card set by Topps in 1962. Supposedly inspired by the cover of EC Comic’s Weird Science #16, the cards told the story of how the Martians, facing the destruction of their home planet, invade Earth and how the Earth defends itself. The cards were hugely popular, but some graphic depictions of violence and the sexual nature of some cards caused them to be discontinued. The legendary artist Wally Wood worked from sketches by Len Brown, Bob Powell finished Woods art, and Norman Saunders painted that artwork. It was really a legendary creative team.

The more you know…

Now licensed to Dynamite Entertainment, writer Kyle Stark (Rick and Morty, Rock Candy Mountain) brings a new tale of the Martian menace, but with a different slant. In the past, it has been all about the Martians and how the Earthlings fight them. Starks takes a different approach, focusing instead on just two survivors, a father and son, and their estranged relationship. Major Carbutt is an ex-military, hard as nails survivor who cannot walk, and Spencer is the son he never wanted, a man still trying to find his way and purpose in life. They are thrown together by necessity when the Martians attack, but the story is much deeper. Yes, Martians are invading, Starks is writing that story, but he also is telling a story of a young man who feels like a failure and a father who does not understand his son. There are some heart-wrenching sequences in this issue, and Starks manages to have Spencer address some of his deep-rooted issues, and ultimately re-structuring his relationship with his father. The Martians are great, but the real story is one of family and what it means when you feel like you have let yours down.

I really was not sure about the artwork by Chris Schweizer (Disney’s Pirates of the Caribbean, Rock Candy Mountain) but as I read the story I realized how totally appropriate it was, and how much it added to the story. It is very loose and very cartoonish. As such, my comic snob nature came out and was ready to voice itself, but after reading Starks story, combined with Schweizer’s art, I fell in love with it. Liz Trice Schweizer (Mars Attacks! assisted on the colors, and her use of spot color and a semi-monochromatic pallet for the night scenes works so very well. There are some powerful panels in this issue, but the final panel was just about as close to a tearjerker as I think you could get. Powerful.

Oh, and one last thing, a request really, where more of cover artist Francesco Francavilla’s (Lone Ranger, Dark Shadows) Mars Attacks art? The cover for this issue is unbelievable!

BOTTOM LINE: A SOLID, HEARTFELT BOOK THAT I WAS NOT READY FOR

I really was not. Most of my experience with Mars Attacks comes from the 1996 movie, and while it was a fun and outrageous movie, it was played totally for laughs. This issue, this one issue, had more emotion and character development than some comics can manage in a year. I cannot believe that I am saying that about a Mars Attacks comic, but it is true.