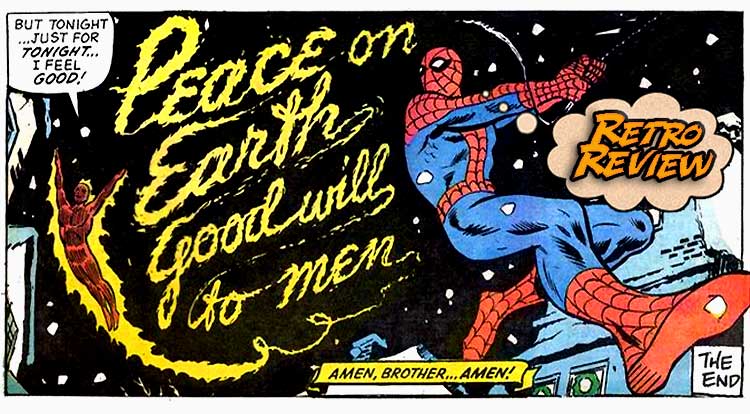 Previously in Marvel Team-Up:  The unique joy of the early Marvel Universe came in seeing the characters interacting as though they occupied the same world, something that previous comic book companies did seldom and/or never.  Even Batman & Superman’s adventures as the World’s Finest Team were held almost entirely in their special team-up book, making moments like Daredevil bumping into the middle of a Fantastic Four adventure or The Thing being sent to bring in The Hulk feel unique and special.  In order to bottle that team-up magic, Marvel editorial created this book, sending their big marquee hero out to interact with heroes all around the world.  Of course, they start close to home, on the beaches of New York… This all takes place on Christmas Eve, mind you, at the annual Polar Bear Plunge (which is where ridiculous people leap into freezing waters for fun), which means that the whole thing is being reported by photographer Peter Parker of the Daily Bugle, secretly the Amazing Spider-Man!  A quick-change later, he’s ready to face down his old foe, but Sandman doesn’t have time for the Web-Head, especially when he’s reminded that it’s Christmas Eve.  Spider-Man is puzzled, but sets out for the Baxter Building (his thought process is fascinating, too, as he figures that since he hasn’t fought Sandy lately, but the FF have, making him the FF’s problem) to warn them that Sandman is on the loose. The legendary friendship of these young Marvel heroes is still in the initial hate-phase circa 1972, but the Torch and the Spider compare notes and realize that they’ve encountered Sandman in the same area multiple times, making Spider-Man wonder if that means Sandman is from the Jersey side of the G.W. Bridge. On their way, though, the heroes run into a mugging in progress, a crime that our heroes cannot just pass by.  Spider-Man leaps from the Fantasticar to play friendly in another neighborhood… Important continuity safety tip:  This issue is sometimes referred to as the first appearance of Misty Knight, ex-NYPD cyborg and member of the Daughters of the Dragon and Heroes for Hire, but the woman in these pages is not identified by name.  Tony Isabella created Misty several years AFTER this story, but a couple of years after that Chris Claremont wrote a line for Misty explaining that she was, in fact, this would-be mugging victim whose Chrimmus spirit overrides her need to see the criminals brought to justice.  Peter and Johnny go on about their search, stopping a couple more accidents before finding and engaging with Sandman, who throws them into a water tower and takes off.  Spider-Man realizes that something is up, that the villain clearly didn’t want to harm them, he just seemed to have something to do.  Our heroes track the villain to a small house in the suburbs… In the name of the season, the heroes agree to let William Baker put the Sandman aside for a little bit to visit his infirm mother for the holidays,  It’s a feel-good story that really works and one that is very memorable (as the Misty retcon five years down the line proves), even with later revelations about the Sandman’s identity making his momma’s boy act ring hollow, leaving Marvel Team-Up #1 with a well-deserved 4 out of 5 stars overall.  If nothing else, the knowledge that Marvel Team-Up had quite a few wonderful issues can be our gift to you, Faithful Spoilerite.

A nice feel-good holiday story that ends with a nice bit of empathy from Spidey and some solid work from Ross Andru.