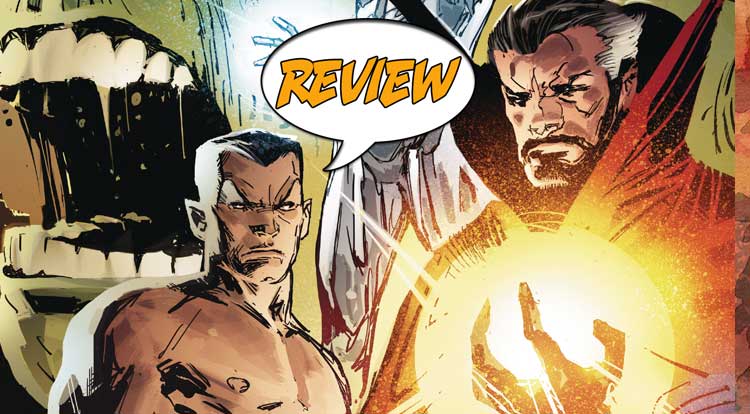 Previously in Best Defense: Doctor Strange from Earth’s cataclysmic future burned out his physical body to throw his astral form back in time to contact The Immortal Hulk, who came across his body in a barn and recovered the Eye of Agamotto from a homeless man.  Meanwhile The Silver Surfer arrived at an impossible cosmic train of planets, hoping to find one life worth saving so Galactus would look elsewhere for sustenance.  Before he could depart, his board raced off to rescue Namor, The Sub-Mariner, who’d traveled to the planet Vodan to seek reinforcements for his war against the surface.  His entreaties ended violently, with both Namor and the King of Vodan cast into the void of space outside the cosmic train.  And inside the train itself, something in a bedsheet seems to be murdering a lot of people…

IT ALL COMES TOGETHER

The Defenders have been assembled, kind of, and the cosmic train has been set on a course for Earth.  Worse still, it’s Conductor’s mind is possessed by Nebulon, one of the oldest foes of the non-team, and Nebulon wants to murder the entire Earth as part of a deal with Mephisto.  The only things that stand in his way are the entirely unwilling founding Defenders.  The Silver Surfer wants finds himself at the mercy of Nebulon, only to get a last-minute save by a silverized Namor, still using his board.  As for The Hulk, he’s been sent into the cosmic train itself, seeking out the people who manipulated Nebulon, leopard-people who want to eat faces and also harvest billions of souls to short the “Soul Market” and pay back a huge debt owed to Mephisto.  This issue actually reveals a bit more about The Hulk’s condition, as well as underlining once and for all how driven and ruthless Namor is about reuniting and defending his people (Hint: It’s another regicide), with a little bit of attention paid to the relationship between Norrin Radd and his giant purple master.  In short, it’s the perfect non-team story, with a layered, complex, dark story that extends the horror of Immortal Hulk to the entire Defenders team.

This issue really plays up the differences between our heroes, allowing their combined weirdness-made-even-weirder-than-before thanks to the modern Marvel experimentation, using each of them shrewdly.  The Immortal Hulk’s mystique is not damaged at all by this issue, nor is Namor’s current quasi-villain status, nor the Surfer’s melancholy.  (The use of a future version of Dr. Strange keeps a whole new realm of weirdness at bay, if only barely.)  Joe Bennett’s art is stellar throughout, including using the Don Perlin design of Nebulon but tweaking it juuuust enough to emphasize the Lovecraftian horror of his monstrous form, and the Leopardmen are phenomenal.  Their dialogue, including a “I didn’t think MY face would get eaten”, is likewise wonderful and hilarious.  The seriousness of Defenders: The Best Defense #1 is never undermined by the humor, but the fun and funny moments are constant, like Namor surfing on Norrin himself while The Hulk has the cosmic surfboard.

Long story short, this issue makes me want to see an ongoing Defenders book by this creative team, as we get four characters who SHOULD BE impossible to work together in a team setting working beautifully while denying it all.  Defenders: The Best Defense #1 is a really good comic, with stellar art and a perfectly-crafted story that has thrills, laughs, adventure and makes it clear that these guys kinda hate one another, all the while keeping their individual mystiques intact, earning a dead solid 5 out of 5 stars overall.  If you read only one comic book this week, my advice would be to make it this’n.