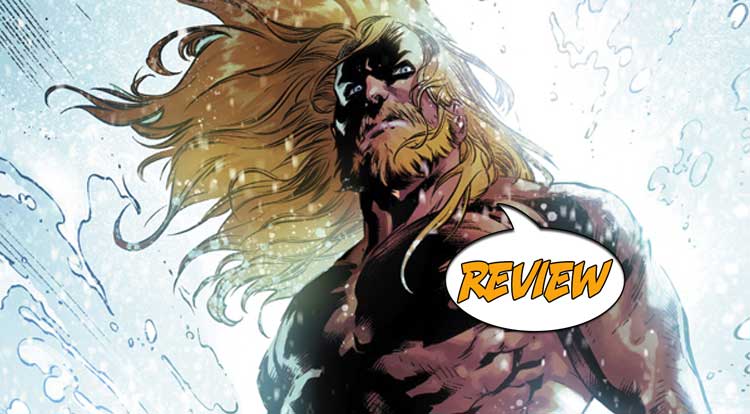 With no memory of who he is, Aquaman has to face the most terrible monster of them all:  A small town!  Your Major Spoilers review of Aquaman #43 awaits! Previously in Aquaman: An amnesiac Arthur washes ashore on a remote island, and ends up being cared for by a young woman named Callie, who’s just a little TOO curious for comfort.  And as a lifetime of horror movies has taught us, there’s something strange going on in this island village.  Aquaman needs to come to his senses quickly… or he might wind up sleeping with the fishes instead of chatting with them.

On a shore, near a cliff, location unknown, we meet Caille, a young woman who treats the ocean like an angry god.  She sacrifices small creatures to its fury in the hope that it will put off the punishment of the sea, all the while being watched by a familiar face.  Aquaman (known to the locals as “Andy”, thanks to his monogrammed belt buckle) has no memory of how he got to their island after the events of ‘The Drowned Earth’ nor does he remember that he’s an Atlantean/human hybrid with super-powers and a JLA membership.  He does, however, know that he’s strong and useful, helping out where he can around the village by nailing down shutters before a storm or bringing in the nets for fish.  He also has a long and fascinating conversation with Caille, who reveals that not only did he wash up on the shore, but everyone who lives there was brought to the strange little island by the sea.  He manages to save an old man named Loc from drowning, only to find that the fish in their nets are dead and rotting.  When he is given a chance to return his memory by mystical means, Aquaman instead runs out into the night, just in time to save Caille from a massive wave that suddenly just… stops.

THE OCEAN HAS A PLAN

The last page of this issue is pretty shocking, especially to the nice folk of the island, but also to the reader.  This issue is a step away from the usual Aquaman story (which I really like) and gives us a mysterious and engaging new setting for the Sea King.  A brief appearance of Mera (as a hallucination in a bowl of water that is said to restore memories) is a reminder that the DC Universe still exists, but that we’re going to get a change of pace.  Rocha’s art is really excellent throughout this issue, especially in his rendering of clothing and fabrics (Caille’s red dress/cloak thing is beautiful in every panel it appears) and the facial expressions are top-notch throughout.  Best of all is how realistic the rustic village in the middle of nowhere feels, with every board and rope feeling real and solid.  DeConnick’s dialogue is the real star of Aquaman #43, from Caille’s opening narration about the callous ocean that watches us all, and I like how well this issue combines the traditional comic Aquaman take with the one seen in ‘Justice League’, making for a positive bit of cross-media synergy.

In short, the big #1 on the cover isn’t just a clever notation of the first chapter, but an indication that it’s a whole new start for Arthur Curry…  or is that Arausio?  Aquaman #43 is the coveted great jumpin-on point, with strong art and a truly engaging, well-crafted story, making for an impressive 4 out of 5 stars overall.  I’m not sure how long this arc is going to last, but I appreciate the decision to build Aquaman back up from nothing and show us what really makes him a hero and a king.

A whole new start for Aquaman, with no memory and a change of scenery. If only his usual bad luck didn't come along...