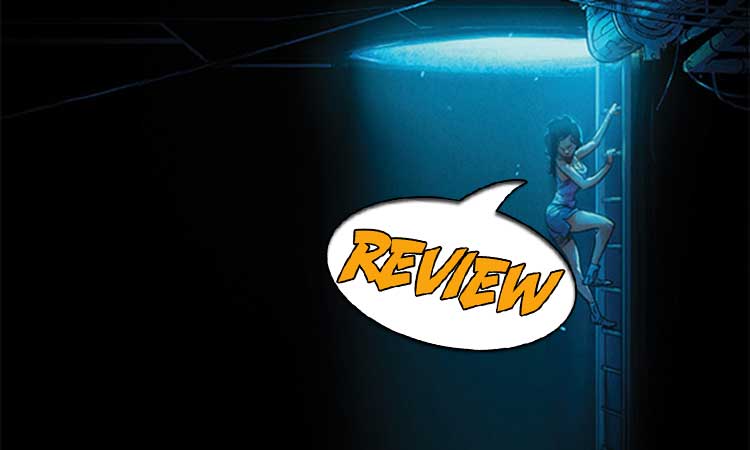 Work finally begins on the ice covering the dome, and Alea wants Sam to work with her to figure out Steven’s final message. They need help from Lyss – is she willing to get involved? Previously in Outpost Zero: Alea has found – and stolen – Sam’s projector. She uses this to get him first to talk to her, and then as a bargaining chip to find out more about Steven. It turns out he had a cryptic message:  that it was up to Sam and Alea to “save them.” Jann and Karen, who have been butting heads, talk further and Karen finally agrees with Jann’s idea for clearing the ice. Throughout the issue, we see the cats of Outpost Zero, and they gradually all make their way down into the area filled with rubble, where they gather around a human-shaped silhouette.

We’ve seen Lyss before, as someone who is very laid back and doesn’t seem to be affected much by anything around her. Outpost Zero #5 starts out with her on her day off, with clearance to get loaners of two pieces of recreational equipment. This is apparently unheard of. She chooses a set of ear players, which are loaded with music from when the ship crashed. (No one can change anything on the players, so it’s what it is.) She also gets a pair of, for lack of a better word, rocket skates. It’s the last pair, and they don’t have the technology to make more. Lyss heads out, soaring around Outpost Zero, listening to music as she goes. This draws comments. The work on the ice is being broadcast, and nearly everyone is watching. And again, this community is like a small village – Lyss is not doing what everyone else it, and people look down on her for it.

Alea takes this opportunity to talk to Sam. She wants to make sense of Steven’s message. Sam doesn’t think there is any sense to be made of it. Alea remembers that the Genship Ancestry Project (G.A.P.), with a whole library of recordings is down in the STEM. Sam lets on that he thinks there’s been some sabotage related to this as well. But he no longer has access to the bunker.

Services Team gets called in to work – and this includes Lyss. They need to set off the steam banks to try to help ease the stress of the ice on the dome. Lyss’ assignment is for six banks. She climbs down below, into the dark, where she does her job, but can’t help feeling that there’s someone else down there. She mentions this to Sam and Alea, who catch up with her to ask if she will give them access to the bunkers. She flat out refuses, and as the screens continue their broadcast, there is an accident and one of the team members loses an arm.

Lyss flies off briefly, and we get an important flashback. The first dome collapsed when she was little, and her mother talks with her frankly about this. One of the points she makes is that they are never safe. But along with this, she tells her not to let it scare her, but to let it free her. Lyss needs some time to think, but she agrees to go along with the plan.

The art in Outpost Zero #5 is clean and crisp. This is not a book that relies on high adventure and loads of action; rather, it is a thoughtful book that turns inward. It’s dealing with drama at a human level, and the art lives up to this challenge, letting us see the subtle emotions that flash across people’s faces. From Lyss’ joy to Sam’s apprehension to the way Alea’s mind is always ticking, always coming up with the next plan, we can see it all.

But again what really pulls things together is the scenery behind it all. I love the juxtaposition of the inside of the dome, which is all green and calm and sunny, with the knowledge that just outside of view they’re buried in ice. It’s a nice metaphor for ignoring problems that are right on top of you. The interior of the bunker is also interesting, dark except for the area immediately surrounding Lyss. We don’t see anything in the shadows either, but they’re fully the kind of shadows where something could be in them. And check out that cover!