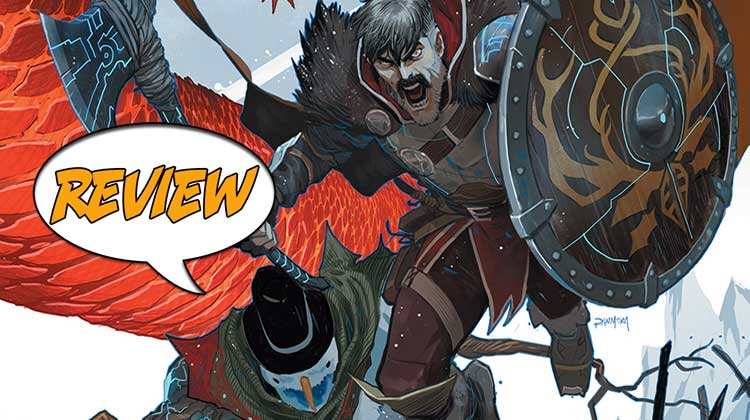 Klaus and the Crying Snowman #1 Review

It’s not often that a comic comes out at the perfect time. Well, this one did—appearing the week before Christmas!

I loved the original miniseries by this creative team, so I was already looking forward to it! It was an ideal read for the holiday season!

KLAUS AND THE CRYING SNOWMAN #1

SOLICITATION: The best holiday tradition in comics returns in the next chapter of the epic Santa saga by visionary Grant Morrison and Eisner Award-nominated artist Dan Mora! Klaus has to help an absentee dad-turned-snowman make amends before melting away for good. And probably before he’s defeated by a pantheon of Norse Gods and their minions. All in a day’s work for Santa Claus.

A DIFFERENT TAKE ON SANTA

I know, I know—Santa is supposed to be a tubby old man wearing a red suit. Well, not in Mr. Morrison’s universe, he isn’t! He’s much more of an action hero. And that twist has made these books fun to dive into!

First thing you’ll notice is that he doesn’t go by Santa. Instead, he’s Klaus, much more adventure-like sounding name. He’s much more muscular than I am used to, but it fits the things he gets into.

You’ll also notice that Klaus is true to his Santa-esque identity in that he now tends to fight less and give presents more.

This one-shot focuses on what at first looks like Frosty the Snowman, and that may have been intentional. We meet him first in the book, and the story focuses on him, with several surprises along the way… and a cool ending (sorry, I just couldn’t help myself).

We get to see the “crying snowman” develop and grow, especially near the end of the one-shot. I was surprised at the ending, especially when it came to the snowman. After all, Morrison isn’t exactly known for his happy endings. So, when he ends things on a positive note, it’s something of a shocker.

I also enjoyed the supporting cast, including Father Frost, the Yule-Goat and what seems to be a smaller version of our Santa. And Klaus’ sleigh is pulled by wolves, not reindeer, another update to the legend a la Morrison.

Well written, this story moves along at a fast clip, and the various characters are represented in a more modern way, which I found enjoyable.

Dan Mora’s art, as it was in the first miniseries, really fits the more adventurous Klaus. When Klaus calls his wolves to action using the well-known phrases including “On, Dancer, On Prancer” etc. I really felt the excitement.

The snowman does get some terrific rendering, and the resolution of the story is portrayed well. I won’t spoil it here, but it was a very touching conclusion. Well done!

Honestly, it’s rare when a book having to do with Christmas appears before the holiday. It’s frustrating when you have to mentally go back into the season in order to enjoy a story like this. That it hit the stands just before the BIG DAY made this one even more special for me.

If this is the beginning of a yearly tradition from BOOM! Studios, I’ll be one happy guy! I’m always looking for more holiday events to enjoy, so I hope we’ll see more of Klaus in about a year! It’s beginning to look a lot like Klaus-mas!

Klaus and the Crying Snowman #1