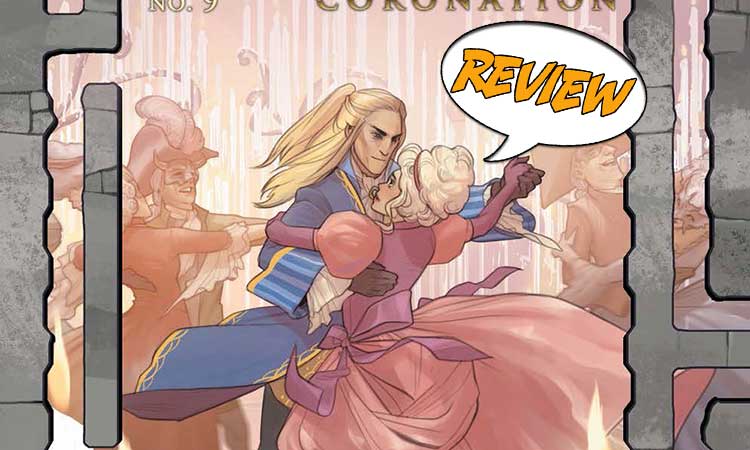 The Owl King has trapped Maria in her own head – in her own fantasy. Will she be able to escape the allure of everything she wishes for? Previously in Jim Henson’s Labyrinth: Coronation: Cible and Maria try to lead the goblins into an uprising against the Owl King. Skubbin cannot resolve to betray Maria, and then Beetleglum shows up to warn them that the King is coming. Maria starts to run off, but Skubbin warns her she’s going the wrong way and leads her to back to the water and a gondolier. At this point, the Owl King shows up to say he’s proud of Skubbin for being his son. At this, Maria runs from the gondola back the way she was originally headed – and suddenly finds herself at a fancy party with Albert.

ESCAPING FROM YOUR OWN HEAD

Parallels to the movie make a strong showing in Jim Henson’s Labyrinth: Coronation #9. It opens with the scene where Sarah finds herself dressed up and attending a masquerade, spotting Jareth from across the room. Then we change to Maria’s story – another party, another fantasy; so similar but with its own details. The fashion is different, and instead of wearing masks, the party goers have blank faces. Albert sweeps her into his arms and tells her he’s better than real.

We step out to see the Owl King talking to Skubbin. Maria is distracted, and is without her magic chalk, so she is no longer a threat to him. The goblin court is in disarray. And here he reveals his true plan – the human child (Jareth, that is), will provide the strength he needs to rule his kingdom forever. Skubbin attacks, but is held off by Septimus who, on the King’s order, strips him of everything but his “Banditry for Beginners” manual (I love that detail!) and heaves him into the Labyrinth.

The Albert of Maria’s dream steps out, and we see the Owl King fabricating a construct of him. At the party, Maria has a chance to sit down and to paint. The King orders the construct to kill her. At the same time, little Jareth sees him and recognizes him as his father. When Albert-the-Construct comes up to Maria to stab her, he sees her painting, which is of the baby, and he stays his hand. They talk a little longer, and the construct’s face starts coming apart. At this, she realizes none of this is real and she’s in another trap. The construct, apparently touched by her affection, warns her that the Owl King means to steal energy and youth from her baby. Admidst this, Skubbin wanders into the Bog of Eternal Stench, there finding Tangle and Cible, as well as a bunch of goblins, suspended in a cage. They’re angry with him, but he works out a way to set them free.

Again in parallel with the movie, we see both Sarah and Maria falling free of this trap. Maria is dragged underwater yet again and surfaces near Cible, Tangle, and Skubbin and their goblin army. And they prepare to march upon the Owl King!

I do like that Jim Henson’s Labyrinth: Coronation #9 uses the movie as a touchstone again. So much changes in the Labyrinth that it is easy to lose track of where you are. It is primarily through the art that we see that Sarah’s fantasy and Maria’s fantasy, while they share some general ideas, are otherwise entirely different from each other. I really like that Maria’s world is much closer to actual 18th-century styles with fewer trappings of fantasy. I also appreciate that each of them must find their own way out of the trap, and it isn’t the same.

The Owl King, Septimus, and even the Labyrinth itself look more sinister here, especially as we learn his plot. He’s always one to scheme, and in some of his backgrounds, we again see the theme of the gears and mechanisms, all the machinery that he controls from behind the scenes to manipulate this world. And considering the construct of Albert, he shows some decided shifts in emotion that are subtle, but still clear to us.

There are some beautiful splash pages of Maria, especially in her frilly party dress, and I really like the way she and Sarah are depicted on the same page as they fall out of their fantasy worlds back into the cold grasp of reality.