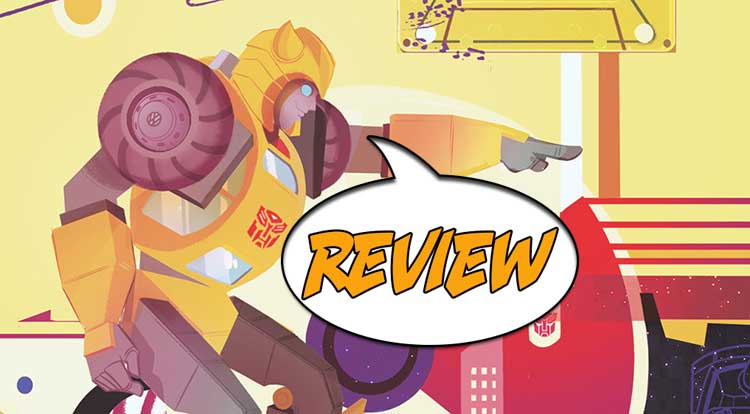 A mysterious meteor falls from the sky, and the Autobots are on the way to get it before their adversaries, the Decepticon, can get it first. Can everyone’s favorite yellow Transformer save the day, or will he be a gold medal failure?  Transformers: Bumblebee – Go For The Gold One-Shot from IDW Publishing is out now! TRANSFORMERS: BUMBLEBEE – GO FOR THE GOLD

Previously in TRANSFORMERS: Since the Transformers were introduced as a toy line in 1984 by Hasbro and Takara, the little, unassuming yellow Volkswagen Beetle known as Bumblebee has captured the imagination of fans all over. Portrayed as youthful, energetic, sometimes overconfident, Bumblebee was the touchstone many children connected with. Combine that with the fact that his smaller toy was often an early purchase due to the lower price, and you can see why Bumblebee became one of the most recognizable members of the Transformers line.

A LITTLE GOES A LONG WAY

We begin with following a meteorite of rare minerals as it falls its way toward Earth at an astounding speed. This meteor will not burn up in the atmosphere, like thousands of others do, but will survive the heat of reentry and crash to Earth, becoming the target for Autobots, Decepticons, and human scientist. Two teams of Transformers meet at the site and instantly begin a battle for ownership of the space rock. Autobots Grimlock, Windblade, Sideswipe, Wheeljack and Bumblebee fight under the command of Optimus Prime. Their opposites, Thundercracker, Skywarp and the collective bots known as the Constructicons fight under the tenuous leadership of Starscream. Both sides desire the valuable rock, as its qualities could prove useful to their respective causes.

The battle rages on, neither side giving nor gaining quarter, until a frightening discovery is made. The meteorite, bombarded by weapons fire, is absorbing that energy. It is quickly reaching critical mass. The resulting explosion could take out an area equal to several football fields, and there are human scientists in the vicinity.  Optimus Prime makes a decision to send out his smallest and scrappiest operative, Bumblebee, to rescue those scientists and get them to safety. Can Bumblebee succeed, or will the casualty count engulf Transformers and humans?

THEY ALSO SERVE WHO STANDS AND WAITS

This one-shot is brought to us by writer James Asmus (Gambit, Quantum and Woody) and artist Marcelo Ferreira (Back to the Future, Teenage Mutant Ninja Turtles: New Animated Adventures) and Maria Keane (Back to the Future). Ferreira and Keane have worked together before, and here they continue a solid body of work as they illustrate a combination of Generation One and modern Transformer designs. They deliver a true to spec look with very little embellishment. The designs are dead on for the old school setting of this story and they deliver some great emotion on the faces. Everything is very dynamic, and the pages flow well. James Asmus has written a nice little tale of ‘bots on a mission. It is full of action, with some interesting choices in regards to the interactions between the teammates on both sides.

BOTTOM LINE: ENTERTAINING LITTLE SET-UP FOR ANOTHER SERIES, BUT WITH A FEW PROBLEMS.

If I have an issue with this Go For The Gold, it comes in two parts.

One, it is a set up for the graphic novel which was released in September of this year. To release a prequel four months later is… odd, to say the least. I am sure there were reasons, but I honestly expected a little more of a close-ended story for a one-shot and was disappointed that it was almost a tease for an older book.

Two, the Autobots are really mean to Bumblebee. Does that sound weird? It feels weird writing it. Listen, I was a Gen One kid. I was raised on the original cartoons and the idea that Bumblebee was the pipsqueak of the Autobots who caused his own share of trouble, but everyone still knew his worth. When my seven-year-old son pointed out the extent his teammates dismissed Bumblebee and put him down in this issue it had me wondering, how ok is this? In the cartoons, and really in many of the comics, Optimus is usually the one pointing out to the others they are not being fair to Bumblebee or another teammate as he supports them. In this story, even Optimus finds time to take a few shots at the little espionage expert before finally making the “everyone is here for a reason” speech. You might not catch it on a first read, but subsequent reads it becomes more obvious. I really was not sure how to answer my son, whom I read this issue too, when he asked why the other Autobots were being so mean to Bumblebee. I think it bothered him most that there was never a point where the other bots said, “Just kiddin’ ‘Bee!” As an adult, I understand this was a set up for a larger story, which I have admittedly not read. To a child, it is a valid point. I think that point may be different in the contest of the overall story, especially if we see Bumblebee prove his worth and receive praise from his teammates, but I am only reviewing this one issue. On that basis, I found it mildly entertaining, but lacking in drive.

That said this is a familiar version of Bumblebee. He is the scrapper that wants to show he can do anything he sets his mind to, often gaining the respect of his teammates.

TRANSFORMERS: BUMBLEBEE GO FOR THE GOLD ONE-SHOT #1 is thin on plot but heavy on action. If you need a ‘bot fix before the Bumblebee movie comes out, this is one way to get it.

Bumblebee Go For The Gold

TRANSFORMERS: BUMBLEBEE GO FOR THE GOLD ONE-SHOT #1 is thin on plot but heavy on action. If you need a ‘bot fix before the Bumblebee movie comes out, this is an one way to get it.