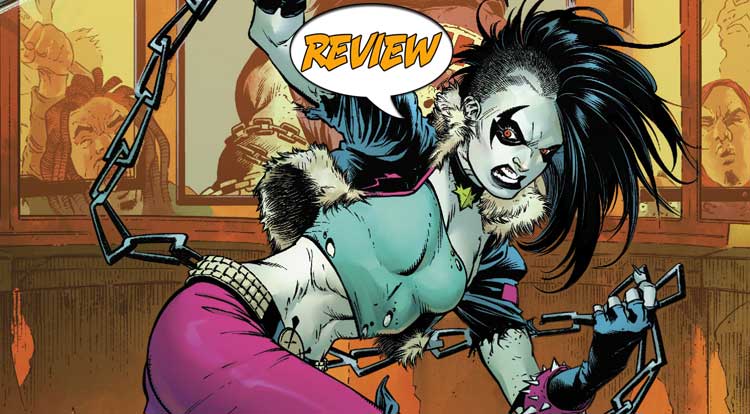 It’s the origin of Crush and the road-trip from hell.  Your Major Spoilers review of Teen Titans #25 awaits! Previously in Teen Titans:  Learn the secret origin of Crush, daughter of Lobo!  When Crush drags Djinn along on a road trip to find an important item from her past, the two get into hijinks that’d make Thelma and Louise jealous.  Crush is on the hunt for Obelus, the mysterious alien chain that once protected her as a child, but here’s the kicker- it’s in the possession of a man named Ezekiel, who killed Crush’s adoptive human parents!

AN ALIEN AND A GENIE WALK INTO A DINER…

This issue starts with Crush deciding that Robin is a massive buzzkill, causing her to steal a Bat-cycle from his storage facility and go on the lam, with Djinn in tow.  Over the course of their journey, Crush slowly reveals the truth about her appearance on Earth and her life before the Titans, from being discovered like Superman (except by meth addicts during Burning Man, surrounded by a seemingly sentient chain) and raised while running from home to home.  We even learn her name is Xiomara, but the most tragic part comes when she discovers that she’s NOT the child of superheroes as her adoptive parents always claimed, but is very clearly related to Lobo.  Xiomara stalked away in anger that day, got in her first fight (which she handily won) and returned home to discover their trailer on fire and her parents murdered.  She reveals do Djinn that they’re really on the trail of her lost chain, which she calls Obelus.  Unfortunately, Obelus isn’t herself anymore, and a HUGE fight ensues.

This issue also gives us a lot of digging into the backstory of Titan Roundhouse, including how he survived a darn-near nuclear explosion a couple of issues ago, all with incredibly cool art.  The teams are so well chosen, in fact, that I didn’t initially realize we were dealing with two separate art teams, and each perfectly handles the emotional pieces of story being revealed.  There’s a deep friendship (and perhaps something more?) developing between the centuries-old genie and the teenage alien in Teen Titans #25, and I’m here for all of it, especially when we find out that Xiomara is more than just fraggin’ and slammin’ like her old man.  Djinn’s history is hinted at, but left unsaid in the first story, while the backup gives us a touching/shocking part of Roundhouse’s life and the state of his family.  His weirdo powers are perfectly rendered throughout the issue, and we even meet his mother, making for a well-balanced issue about family, loss and emotion.

This is the most creative and surprising Teen Titans has been in years, and I’m happy to finally get away from Terra Redux and the excesses of the New 52 team into something that could be to new readers what Cyborg, Raven and Starfire were back in 1980.  Teen Titans #25 makes for a great read, with two separate stories that are equally moving and engaging, two separate art teams that are equally talented and one excellent anniversary, earning 4 out of 5 stars overall.  I sincerely hope that this team has a long and storied history as Titans, because this issue shows how much work has gone into the creation of the new heroes and how much emotion this creative team can pack into an issue.

Lots of background, tongue-in-cheek humor and real emotion to be had, and Crush is the hot new character find of 2018!