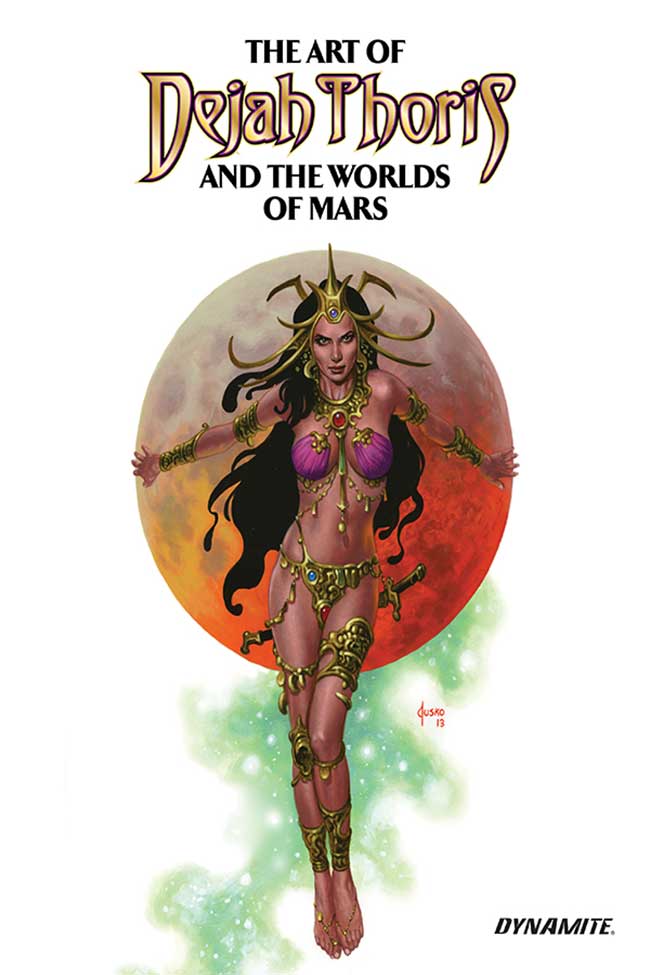 Dynamite Entertainment is proud to announce the upcoming release of The Art of Dejah Thoris and the Worlds of Mars Volume 2. The hardcover collection features 280 pages of full color artwork from some of modern fantasy comics’ top illustrators. This highly anticipated follow up to the best-selling first volume includes cover art and pin-ups from Dynamite’s hugely popular Warlord of Mars and Dejah Thoris comic series. Featuring a cover by comic book legend Joe Jusko and including the talents of J. Scott Campbell, Frank Cho, Lucio Parillo, Tula Lotay, Mike McKone and many more, this magnificent tome is sure to impress.

Since the first serialized adventures in 1912 of the Martian Princess Dejah Thoris and her beloved hero, John Carter, science fiction and fantasy enthusiasts have dreamed of the faraway Red Planet (known to its inhabitants as Barsoom). Its wonderous sights and monstrous perils. In hundreds of full-color illustrations, the finest artists of modern fantasy have brought the dying world of Mars to life, depicting scenes of brutal conflict with alien beasts, quiet moments overlooking Martian wastes, and enticing visions of an exotic princess at her most intimate.

Dynamite is proud to have contributed to Dejah’s century-plus legacy with nearly a decade of fan-favorite comics starring her and John Carter. Including the just finished series by writer Amy Chu and artist Pasquale Qualano and the Barbarella/Dejah Thoris crossover miniseries from Leah Williams and Germán García launching just around the corner in January.

“Dejah Thoris has long been a core and treasured part of our comic book and merchandise lineup. We’ve been fortunate to work with some of the greatest artists working today on jaw dropping covers and dynamic interior art,” said Nick Barrucci, Dynamite CEO and Publisher. “It’s about time we curated more of these pieces together in one deluxe package for the fans who love the art as much as we do.”

The Art of Dejah Thoris and the Worlds of Mars Volume 2 will be solicited in the January issue of Diamond Previews catalog, the comic industry’s premier source of merchandise for the comic book specialty market and scheduled to ship in April of 2019. Readers are encouraged to order through their local comic retailers or through digital platforms courtesy of Comixology, Kindle, iBooks, Google Play, Dynamite Digital, iVerse, Madefire, and Dark Horse Digital. Fans are encouraged to follow Dynamite Entertainment’s social media channels for the latest updates on Dejah Thoris and Warlord of Mars comic books and graphic novels.